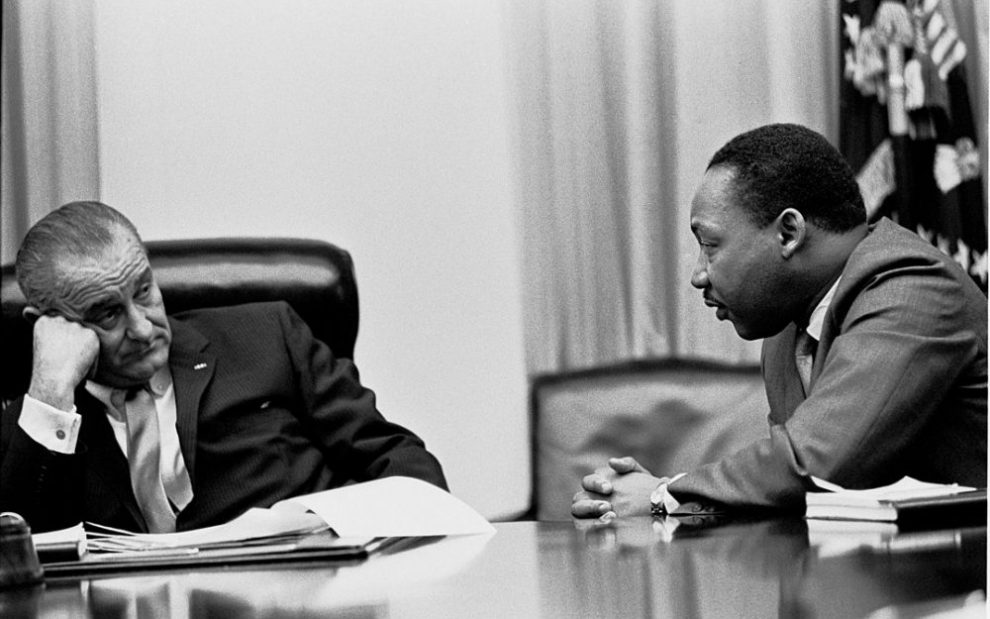 Recently, thousands of people in more than 2,500 U.S. cities and 20 countries worldwide took to the streets to protest longstanding systemic injustice and proclaim that Black Lives Matter. However, issues of anti-oppression and racial justice remain a point of tension in the church. While many of us today grapple to respond to social injustices, we Catholics seem to forget that we have a rich history of fighting social injustice. During Black History Month, let us reexamine our commitment to social justice through reviewing the history of Catholic social protests in our country.

In the 1960s the United States experienced a prolonged period of protest against racial injustice, that led to several high-profile assassinations: Medgar Evers on June 12, 1963; Malcolm X on February 21, 1965; Martin Luther King Jr. on April 4, 1968; and white congressman Robert F. Kennedy in 1968. The nation-wide unrest, particularly among disenfranchised young people, started to heighten in the summer of 1967, which saw 159 protests

On July 28, 1967, President Lyndon B. Johnson responded to the protests by creating the bi-partisan Kerner Commission to analyze the situation and recommend a response. Johnson’s Administration hoped to understand what happened and why and what could be done to prevent future unrest.

“The Kerner Report,” completed on February 29, 1968, included 426 pages of analysis and recommendations. A recurring theme was that America must work to improve living conditions for Black people and to promote equity, equality, and justice, because Black lives matter.

However, white stakeholders in the U.S. government largely ignored the report and have done little to improve Black lives. America had a chance to fix the problem and did not. We could learn from history, because history never lies. We did not.

As the author James Baldwin said to his nephew James, “Americans are, in effect, still trapped in a history which they do not understand; and until they understand it, they cannot be released from it.” The recent murder of George Floyd demonstrated how many white Americans are still trapped in the same historical cycle.

Partially inspired by the rich history of Catholic protest in America, the more hopeful among us are taking to the streets in multitudes.

Despite the attention paid to protests in the 1960s, Americans today have just as much reason to protest. Despite historical movements, there still exists injustice and danger for Blacks today. Cynics may argue that since the turmoil of the ’60s had little effect and that today’s protests are similarly in vain: Nothing will change, and the cycle of social injustice will continue.

Partially inspired by the rich history of Catholic protest in America, the more hopeful among us are taking to the streets in multitudes.

The circumstances that birthed the 1960s civil rights movement and the current Black Lives Matter movement differ greatly, but both stemmed from a desire for justice, freedom, equality, equity, dignity, and respect for Black Lives.

Today, people are protesting the fact that America has largely forgotten the promises it made in the ’60s to the Black community. We currently have an opportunity to shape our understanding of the reality of race and racism in America. The protests touch the core of human nature, as they involve people of all ages, religions, and ethnicities.

Perhaps because the protests of the 1960s did not lead to lasting change, many are quick to minimize the goals and potential outcome of this past year’s events. However, as people directly impacted by the current unrest, we have the power to rewrite history. If we pay attention to both the present and the past, we can avoid past mistakes while ensuring that we never lose sight of our goals.

A decade of prosperity and protest

1960 was a year of prosperity culminating from the steady post-war economic growth of the 1950s. Mass consumerism, the growth of television, pop culture, and the sexual revolution all reinforced the myth that people loved their lives and their communities. However, two thirds of Black people were still suffering lawful, discriminatory segregation under the harsh laws of Jim Crow and reeling from tragedies such as the 1957 incident at Little Rock Central High.

Despite the pandemic that resulted in massive unemployment, 2020 was also a year of relative prosperity. In fact, there are now 56 more billionaires in the United States than there were before COVID-19. And yet, as in 1960, inequality and injustice still exist for Blacks. Can we really celebrate the prosperity of a small percentage of whites while so many live in poverty? Two disparate Americas still exist.

While it appears that 2020 offers advantages over 1968, the problems are perhaps just better hidden today. In the 1960s, the Ku Klux Klan did not bother to hide. In late 1963, the KKK bombed a Baptist church in Birmingham, Alabama during Sunday church services, killing three 14-year-olds and an 11-year-old. Georgia Governor George Wallace sent state troopers to disperse peaceful protests at the children’s funeral, and they murdered two additional young Black people. The KKK member who set off the bomb, Robert Chambliss, was sentences with only six months of jail time and a $100 fine, hinting at an allegiance between southern politicians and the hate group.

In 1963 racism was not hidden under the guise of democracy.

Today, the principal proponents of white supremacy are not as clear. In 1963 racism was not hidden under the guise of democracy. Today, Black people are killed as the result of systemic racism, such as police racial profiling, which is harder to quantify and directly fight. Most of today’s racists are no longer wearing white hoods—although many are sporting MAGA caps. They are afraid to walk our streets in daylight.

After his April 1963 arrest, Martin Luther King Jr., was incarcerated for 11 days, where he wrote the “Letter from a Birmingham Jail,” in which he argued that the reason for his imprisonment, civil disobedience, is necessary for civil rights progress.

He inspired many others to protest peacefully. Today, the Black Lives Matter movement lacks a strong leader. Many of the protesters assemble haphazardly, without guidance from or affiliation with any organization.

However, this has meant that the movement has spread beyond one individual or even one nation: today BLM is in 20 countries, where it is led by people motivated by anger, injustice, and frustration with racism. Today, we have a broader reason to be in the street, so people of all ages, colors, shapes, religions, and backgrounds are now attempting to listen to each other and make room for Black voices.

In July 1959 the first U.S soldier was killed in Vietnam. The United States’ involvement in the war, ostensibly to curtain the spread of communism, heightened in 1961, when President Kennedy secretly sent 400 soldiers to Vietnam. Throughout the early 1960s, young Americans were drafted to fight in a war that they didn’t understand, and many of the soldiers who lacked the means to avoid the draft were Black. As the senseless war droned on, in the late 1960s civil rights protests latched onto an anti-war agenda.

Today, many wonder who the enemy is. Although some may argue hyperbolically that we are at war against COVID-19, Black people, or police, we don’t have a clear opponent.

Although schools were integrated and drinking fountains and bathrooms were no longer segregated, many in the South still wanted to keep Black Americans apart during Nixon’s 1968 campaign.

Today, our leaders’ racism is perhaps more subtle. Nevertheless, the protests are many and strong, and leaders are responding with a plea for “law and order.”

Nixon promoted this platform to show he intended to calm the country and quell the riots, which his predecessor, the more liberal Lyndon B. Johnson, had not defused. Today’s opposition is calmer and more civil, and the government should not need to call in the National Guard or incite violence against peaceful protesters.

Catholics, let history be our guide

In 1968 it was clear who was killing Black people, but today, the lines are more blurred. Schools and offices are integrated, our political system has grown more diverse, and racism is no longer so overt.

History can help us analyze and understand the present situation. We must note that hypocrisy is the evil behind the sin of racism: Today, few want to admit they are racist. As President Obama once said, “this idea . . . [that] you are never compromised, and you’re always politically woke, and all that stuff, you should get over it quickly.”

As President Obama once said, “this idea . . . [that] you are never compromised, and you’re always politically woke, and all that stuff, you should get over it quickly.”

The 2020 protests are an essential vehicle for raising awareness and attempting to effect change, because we did not learn from the 1960s.

Have an historical spiritual perspective

While America is not yet the “land of the free” promised to Black people, we must view present facts with a spiritual and historical eye. As we try to understand the forces behind today’s racial injustice and civil unrest, we must, with humility and spiritual audacity, continue to hope for a better future. Although most of us are not responsible for the situation and few will benefit from it, we should be held accountable as one community.

Under the Ignatian heritage, I highly encourage you to pray for and with one another. Seek God in all things. Create perspective and do not despair.

In history, past events and the present are liable, and all of those deplorable riots that seem inevitable could always take a different turn. Many people who lived through the 1960s were just like us today and could not predict the future. We need to pray, so that we do not fall in the comparative attitude: I am not like them, and today is not like yesterday.

This essay is part two of a four part series of essays for Black History Month written by Patrick Saint-Jean, S.J. Click the links below to read parts one, three, and four.

Part Three: This Black History Month, use the 1619 project in religious education