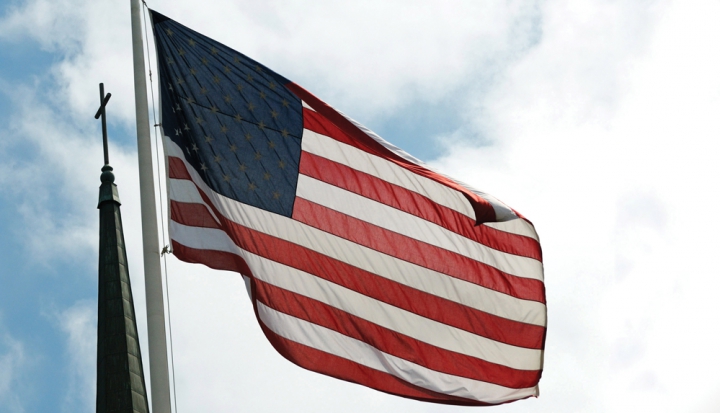 Attending Sunday Mass last year over Independence Day weekend, I watched as the priest gave the final blessing and a man a couple rows ahead genuflected and hurried toward the door. Then the cantor announced that the closing “hymn” would be “America the Beautiful.” The man stopped, returned to his pew, and sang along. If it had been “How Great Thou Art,” he probably would have beaten the parking lot rush and gotten home early to get the grill going.

Like many American Catholics, my patriotism tends to be more public than my faith. I’m much more likely to stand, hand over heart, for the national anthem than to make the sign of the cross when I secretly say grace in a restaurant. There are no nation-states in the kingdom of God, yet that seems to be how so many of us operate. And in the United States, at least, the church cooperates.

On national holidays—usually Memorial Day, Independence Day, and maybe Veterans Day—Catholic Mass often features patriotic songs. In my experience, these, along with Christmas carols, tend to get the most participation from the congregation. Most of us grew up singing both types of songs in elementary school, and we have them more deeply memorized than most hymns.

I once heard a Catholic, politically conservative university professor say that he never puts his hand over his heart during the national anthem because of the idolatry the act suggests. Does the same principle come into play when singing patriotic songs at Mass? Put more broadly, does American patriotism compete with devotion to God? Do patriotic songs at Mass cross a line?

The questions are fraught not just with theology but also history. The Catholic Church is a universal church, transcending national borders, a concept reflected in its long reluctance to accept vernacular languages. In that context, singing patriotic songs might imply comparable loyalties between God and country.

American patriotic songs follow a few broad themes, and God is a central character of the ones that make their way into church. “America the Beautiful” requests God to “shed his grace” and “mend . . . every flaw.” God blesses the country in “God Bless America” and lets loose “the fateful lightning of his terrible swift sword” in “The Battle Hymn of the Republic.” As might be expected, several of the composers of these songs were religious. Samuel Francis Smith, who wrote “America (My Country ’Tis of Thee)” in 1831, was a Baptist minister. “America the Beautiful,” by Katharine Lee Bates, first appeared as a poem in the Congregationalist, and a church organist composed the music in 1895.

But perhaps not all of our patriotic songs are appropriate for church. Not surprisingly, several contain language of war. “Battle Hymn” celebrates the Union’s abolitionist goals in the Civil War with “the coming of the Lord” and concludes with a stirring commission: “As [Christ] died to make men holy, let us die to make men free” (we more squeamish modern singers sometimes substitute “live to make men free”). “God Bless America,” the most recent of the patriotic songs I have heard at Mass, was written by Irving Berlin in 1918 during World War I and rebooted in 1938 with the approach of World War II. “The Star Spangled Banner” is about a battle in the War of 1812.

I have heard “The Star Spangled Banner,” written by Francis Scott Key in 1814, at church, though rarely. After all, it mentions God only in the last, never-sung verse, and its martial provenance and recent silent protests during the playing of the national anthem have made the song somewhat controversial. Many prefer the more peaceful “America the Beautiful” or other patriotic songs that celebrate the country’s natural beauty. Bates’ cross-country trip through “amber waves of grain,” “purple mountain majesties,” and the “fruited plain” inspired “America the Beautiful.” “My Country ’Tis of Thee” loves “thy rocks and rills, thy woods and templed hills.”

In the 19th century, when most of these patriotic songs were written, anti-Catholicism was rampant in America, and Catholics were second-class citizens. Furthermore, the songs celebrated political values that the church did not yet appreciate. Since that time, however, Catholics have moved firmly into the mainstream of American culture, and the church has opened up to some democratic principles, although neither happened without tension.

In “Our First, Most Cherished Liberty,” the recent document on religious freedom (one of those more recently accepted political doctrines), the U.S. bishops write, “To be Catholic and American should mean not having to choose one over the other.” To be sure, that statement focused on a very different point, where the choice is forced on Catholics, but the sentiment expressed points to a stark reality: Many American Catholics seem to have voluntarily prioritized country over creed.

This is evidenced by more than the singing volume of “America the Beautiful” compared to “Immaculate Mary.” A few years ago a Gallup poll asked Americans of various religious faiths how strongly they identified with the United States and their religion. For Catholics, 88 percent identified “very” or “extremely” strongly with the United States, compared to 55 percent who answered the same for their religion. No wonder, like the man at the Independence Day Mass, we participate more when the congregation is singing patriotic songs.

The practice of patriotic music at Mass is worth deeper examination, if only for a reminder that citizenship of any country is no more a guarantee of salvation than membership in any religion. Nonetheless, qualms notwithstanding, I, too, sing along with a kind of wry gusto and sometimes-unexpected feeling. The son of a World War II veteran, versed, if wary, in the trappings of patriotism, it’s no wonder I’m a pushover for these songs.

But sentiment may be the only justification for singing patriotic songs at Mass. The theological case is weak, given our faith’s statelessness. The emotional case—which essentially asks indulgence or tolerance for attachment to country—is less weak, but risky. Fueled with too much pride and emotion, patriotism can bleed into nationalism, which is certainly antithetical to the teachings of Jesus. When love of country devolves into a devaluing of all others, even these beloved songs might be occasions of sin. Fortunately, the typical hymnal defuses the issue by narrowing the patriotic options only to the less martial “My Country ’Tis of Thee” and “America the Beautiful.”

Perhaps the church should expand its definition of patriotic hymns. I’ve never heard Woody Guthrie’s “This Land Is Your Land” (1940) at church. But perhaps it, too, has a place. Unlike the other songs, which celebrate the maker of the glorious country, Guthrie’s last lines echo the church’s social justice concerns:

In the shadow of a steeple I saw my people,
By the relief office I seen my people;
As they stood there hungry, I stood
there asking,
Is this land made for you and me?

Ultimately I think all these patriotic songs affirm love of country and compatriots, but not to the exclusion of others—at least no more than traditional hymns debase nonbelievers. I don’t think the songs will lead me to chauvinism, and I have to apply that trust generally, but with vigilance.

On the Sunday after the attacks of September 11, 2001, “America the Beautiful” was the closing hymn at my church. It was stirring and appropriate, but it became piercing when we sang the rarely reached fourth verse:

Learning that “alabaster cities” was actually inspired by the 1893 Chicago World’s Fair, a celebration of America coming onto the world stage, made the song’s eerie prescience of the white Twin Towers all the more affecting, the newly tearful symbol of a century of the nation dominating that stage. Beyond that poignant verse, the song’s peaceful evocations of a positive love of country, without bellicosity and revenge, struck the right note. I’m not sure any traditional hymn would have said so well what we needed to hear.