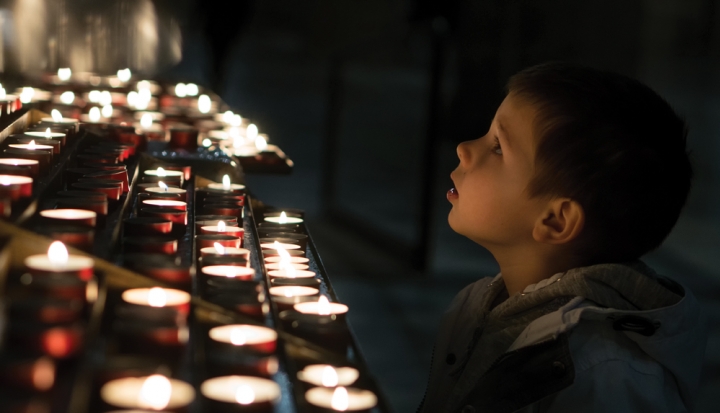 Recently a friend of mine posted in a Facebook group for moms that she was concerned about her son who was expressing a sincere love of God, a response which pained her. “I wish I could just enjoy it and not feel this weird sadness about it,” she said.

I briefly considered a joke: “This is very on-brand for you.” My friend, for as long as I’ve known her, has wrestled with how to talk to her kids about matters of faith. I wouldn’t call her a cynic, because it’s her awareness of how good the world can and should be that makes the awareness of the negative so troubling.

My friend is not alone. The angst parents feel about their own children’s impending realizations, their increasing awareness of all that is sad and wrong and violent, hurts. Quickly, others chimed in, virtually nodding their heads in agreement. While their children’s spiritual imaginations were growing, their parents’ anxieties and sadness about the inevitable disappointments the world would serve up were getting fanned.

“On the one hand, I love my child’s developing spirituality in that it gives him a moral compass and, I hope, makes him feel safe and loved,” says Claire, mother of two. “However, I can’t help but worry about how to talk with him down the line when he poses more complicated questions to me about how I personally feel about the church, which is conflicted to say the least.”

I’m not perfect. My son is only 5. But through my own prayer and spiritual practices, I’ve come to take a three-pronged approach to the bittersweet endeavor of raising a faith-filled kid.

I don’t try to protect my son’s innocence. That might seem counterintuitive to some parents, but in my experience going to lengths to shield him from the cruel realities of the world only makes my own anxieties worse—and his. Our children do active shooter drills in elementary schools, after all. They want to know why. But they also want our reassurances that we will do everything we can to protect them.

Likewise, when middle-class white parents of a white, male child (AKA my family) avoid difficult conversations about sexism and racism, two of the most all-pervasive cruelties and injustices our world suffers, we do so out of privilege. This was affirmed in my family recently by a seven-week course my husband took on talking to kids about racism. The course, hosted by a nearby Episcopal church, guided white parents through the realities of how we unknowingly nurture racism in young children when we presume that what is normal for us—that the police are always there to help our community, for example—isn’t always normal for communities of color.

Of course, I take an age-appropriate approach to having the hard conversations with my son. I also think that we can push the boundaries a bit on what we consider “age-appropriate” and give kids, even young kids, much more benefit of the doubt.

Lyz says that she tries to be as up-front as possible with her two children, both under 10. “They are so young, so the conversation is ongoing, but I love these moments of questioning and learning, even if they question me,” she says.

One of the reasons my husband and I decided to baptize our son was because the Christian story was not only the story that we’d been raised with but also one we believe is holy and filled with truth. It reminds us that, yes, the world can be terrible and do terrible things, but those terrible things don’t have the last word.

My friend Lila, who doesn’t have kids, is culturally Jewish but was raised by parents who thought that she’d figure out what she believed on her own. Admirably, they didn’t want to force a faith on her. They believed that it was important for her to find her answers by choosing her own quest. The problem, Lila confided in me, is that she didn’t have anything to work with. When faced with tragedy, she didn’t have religious lessons to fall back on. She didn’t even have anything to reject, which would have at least pointed her in the opposite direction as she sought answers and solace.

“I want my kids to come up with their own answers,” says Lyz. “And I want them to get there on their own. But it’s hard when they are little and everything is black and white for them, but faith is so murky.” Which is why she brings her children to church and engages their questions openly and honestly.

At some point all parents, whether or not they raise children in a religious tradition, have to let go. We begin letting go from the time they are infants, increasingly allowing our children more and more agency over their own lives. The 6-year-old selects and opens his own after-school snacks. The 13-year-old chooses which shoes she wants to purchase for the first day of school. The 17-year-old drives herself to soccer practice.

Taking this same approach toward kids’ spiritual formation similarly allows parents to let go and trust their kids. But just as I don’t expect my son to know how to open a bag of Goldfish crackers without me showing him how, I can’t expect him to know how to pray.

“I have always really struggled with faith and often felt jealous of friends and family who had an uncomplicated belief,” says Cynthia, whose son’s faith she likens to a comic book story, complete with villains, “good guys,” and superpowers. “I completely reject that understanding of God. So I don’t want to discourage [his faith], but I do want to discourage his current understanding of it.” She says she fears that as her son gets older this approach to faith will cause him to become disillusioned—or worse, that it will hurt him.

As parents, our job is to protect our children not just from physical but also emotional and spiritual harm. Which is why the need to let go can be so challenging. We recall our own hurts and want to prevent those same hurts from falling on our beloved sons and daughters.

That same friend who posted on Facebook, when I asked her to tell me more about her anxieties, indicated that this is exactly what pains her about her son. It is her own memory of spiritual pain that exacerbates the anxiety. Still, she told me, “I have to remember that his faith journey and mine are not necessarily going to be the same. So I wish I could stop worrying now and just get there when I get there.”