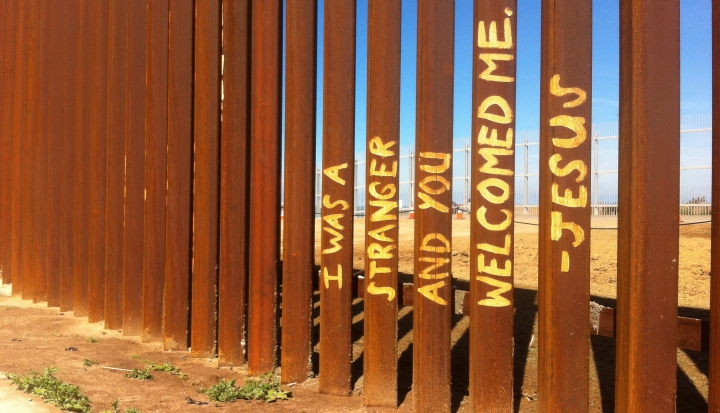 The president has promised a vast reinforced wall on the border to keep migrating people out. Immigration enforcement officers stalk homeless people without documentation outside church-run shelters. Refugee freezes, outright bans, and walls of paperwork keep those attempting to escape from the violent and unstable Middle East from safety.

What of it? many of us ask. Folks in the United States can’t be responsible for all of the world’s problems. Why should America run the risk of accepting the world’s people on the move, whether escaping ISIS in Iraq or criminal gangs in Central America? It’s not our fault.

In truth, contemporary migration is directly attributable to policies that emerged out of Washington. After over a decade of disintegrating regional conditions, it is hard to argue that the decision to invade Iraq in 2003 was not criminally wrong-headed. Follow-up policies contributed to the spread of disorder and violence throughout the region.

Closer to home, high demand in the United States for outlawed drugs like methamphetamine and cocaine helps propel disorder in Central America. Since the 1980s the region has also been liberally seeded by the United States with criminal gang members after a deportation policy here had the unintended effects of destabilizing communities and governments and unprecedented levels of street violence and homicide in Central America.

As a matter of geopolitical ethics, the United States must accept some responsibility for the collateral damage policies like these created. There are also powerful biblical and moral demands to care for the sojourners and migrants among us. Leviticus instructs, “The alien who resides with you shall be to you as the citizen among you; you shall love the alien as yourself, for you were aliens in the land of Egypt” (19:34). It’s a reminder to all contemporary Americans of their forebears who fled their own pharaohs.

The church indeed teaches that nations have a right to regulate their borders but adds that the right is not absolute; it must bow to mercy and justice. People have a right to migrate—and not just when their personal safety is threatened, as when the Holy Family fled the cruelty of Herod. Flight is justified and refuge required by host states even when it is compelled “only” by the need to put bread on the family table.

The church further teaches that people have the right not to migrate. Many people making the perilous journeys out of the Middle East or Central America would likely prefer to stay in their homelands if conditions were improved. A commitment to help achieve that happy state should be balanced against efforts to keep migrants out or deport them after they have arrived.

We are willing to take risks and make vast investments for war-making and law enforcement in our society; we should be as willing to do the same for mercy and peace. U.S. citizens are being asked to swallow hard to finance our great southern barrier, estimated to cost anywhere between $12 and $25 billion. But in 2016 U.S. economic and development aid that helps stabilize and create opportunity in Central America was a paltry $135 million.

Undocumented residents in the United States are surely breaking U.S. law. Keeping the spirit of the law in mind and the higher morality we are called to embrace as Christians, is it merciful or compassionate to pursue them? Is it wise as a practical and spiritual matter to create a social infrastructure that inspires fear in millions of people, one that threatens to entangle undocumented and native residents alike?

A blind, brutal adherence to the letter of the law has both fiscal and spiritual costs. How many broken families will be left behind? How many U.S. citizens of deported parents will be bereft of a mother or father? How many holy families will we be turning away from sanctuary?