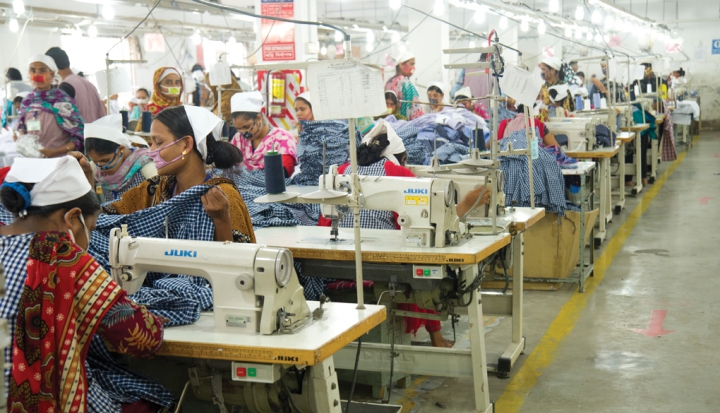 Meet the woman who makes Walmart’s low-priced clothes. She works 10-hour days for $103 per month. And her factory is one of the good ones.

Amid the bustle of the factory floor, Nahar Akhter’s fingers move ceaselessly across the metal throat plate of her sewing machine, dragging seam after seam to completion. It is quietly furious work, driven by the pressure of a daily quota, but for a young garment worker with a sick mother and a 5-year-old at home, it provides the daily bread. “My husband and I spend money for my mother’s medical treatment, provide for my son, and save a bit,” Akhter says.

It is work many in Bangladesh would like to have. Crowding more than 158 million people into a country smaller in area than Iowa, Bangladesh is a nation beset by poverty, limited infrastructure, and corruption. An estimated 40 percent of the country’s residents live below the poverty line, driving millions each year from the lowland deltas of the interior to the crowded cities of Dhaka and Chittagong in search of work. There, many end up on the production floors of the estimated 5,000 garment factories that form the backbone of the country’s economy.

It is a path familiar to Akhter, who followed her two older sisters into the Mark Mode Limited garment factory in the Gazipur District of Dhaka. Having lost her father when she was just an infant, Akhter, like many girls here, was forced to choose marriage and work over education. Married at 13 and pregnant at 14, garment work was an option that promised a living wage for a young woman with few choices.

“I didn’t want to stop my studies, but my father died when I was one year old, so there was no one to support our education,” Akhter says. Six days per week Akhter works from 8 a.m. to 7 p.m. with a one-hour lunch break.  For that, she is paid 8,000 taka per month—about $103—well above the legal minimum wage of $68 per month set by the government of Bangladesh. And while the work is tedious, stitching the seams on hundreds of garments each day, Akhter knows she is luckier than others in the industry.

“I have friends who work in other factories, and they want to come here,” Akhter says. “This factory management pays our salary on time, while others pay late. The line chiefs in some places also scold, but here there is no scolding.”

Indeed, the factory floors of Mark Mode Limited are as safe as any factory here can be. Fully compliant with all government safety and worker standards, Mark Mode Limited has access to the lucrative markets of Europe and North America, where it has counted retailers such as Walmart and K-Mart among its buyers for casual and dress shirts, as well as women’s blouses and pajamas. Amid the blur of laborers on its factory floors, yellow vests identify some of the 120 workers trained in firefighting by the company. Others, including Akhter, are trained as first responders for medical emergencies, their photographs attached to readily accessible first aid kits so that any of the factory’s 800 workers can recognize them on sight.

“We do not know what kind of pressure other factories are putting on their employees, but factories can get away with skirting the law for sure,” says Bilash Gomez, managing director of Mark Mode Limited. “We give all of our employees benefits simply because we believe a compliant factory should follow the country’s rules and laws.”

And while Mark Mode may be a shining star, recent disasters have revealed deep cracks in the foundation of Bangladesh’s garment industry. In November 2012 a blaze destroyed the Tazreen Fashion factory in Dhaka, killing 117 workers and injuring at least 200 others. Barely five months later, in April 2013, the eight-story Rana Plaza commercial building collapsed. In what has become the deadliest garment factory accident in history, 1,129 workers were killed and more than 2,500 injured.

“When the building collapsed, our staff ran to the building immediately and started helping,” says Ranjon Francis Rozario, Dhaka’s  regional director of the Catholic humanitarian agency Caritas, which works closely with disaster survivors. “The bishop instructed me to provide any services that were needed so the church could serve those in need immediately.”

While for decades the industry had been known for regulatory sidestepping and safety violations, the twin disasters have refocused both government and international attention on the plight of Bangladesh’s 4 million garment workers. As a show of pressure, the United States cancelled preferential trade privileges for some Bangladeshi goods. Groups of both U.S. and European retail clothiers have since agreed on a common set of inspection standards, an important step toward ensuring the safety of workers in the factories from which they buy, while others have even begun sending their own engineers to inspect the factories with which they do business.

Recognizing the threat to an industry that provides 80 percent of the country’s export earnings, the government of Bangladesh has also taken action. In 2013 officials set up a panel to raise the minimum wage for garment factory workers, and are in the process of developing a team of 200 safety inspectors dedicated to the garment industry. In addition, the Bangladesh Garment Manufacturers and Exporters Association (BGMEA), Bangladesh’s largest export-oriented trade body, has stepped up both its safety trainings for garment factory workers and the frequency of permitting inspections for the factories themselves. The increased emphasis on safety is evident everywhere, says Repli Denis Cruze, executive director of the Mark Mode Limited factory.

In March 2014 engineering inspectors organized by Western retailers issued their first report on the safety of the garment factories they inspected in late 2013. Organized through the Bangladesh Accord Foundation, a group of 150 clothing retailers from more than 20 countries, the report cited instances of inadequate fire doors, missing sprinkler systems, and dangerously high weight loads on several floors of inspected buildings, according to a New York Times article. While such issues are serious, requiring remediation by the offending factories within six weeks, inspectors reported they found no issues as critical as those that brought about the collapse of the Rana Plaza building last year—a step in the right direction, says Benedict Alo D’Rozario, director of Caritas Bangladesh.

“Our assessment of the new laws and regulations is that systematic and participatory monitoring by a joint team of government, BGMEA, and workers’ unions will bring about a safer working environment,” D’Rozario says. “At present there are more coordinated steps in place to ensure better and safer working conditions for workers, and we hope to see this continue.”

Yet while the wheels of change are slowly beginning to turn, one group finds itself outside of the industry looking in. For many of the survivors of Tazreen and Rana Plaza, the time since the disasters has been one of painful recovery. Scarred physically and psychologically by their experience, many have been unable to return to work, and now find themselves jobless, traumatized, and disabled.

Recognizing the needs that existed, Caritas Bangladesh again stepped in to help, providing those impacted with support for medical bills, seed capital for new businesses, financial support for orphaned children, and psychosocial counseling for survivors, most of whom are young women. Dewan Shafaet Ahmed, a psychosocial counselor hired by Caritas, says the depth of the trauma experienced by survivors was profound.

“We didn’t find one victim that was in a sound mental state,” Ahmed says. “They had sleep disturbances, flashbacks, numbness, guilt, feelings of helplessness, financial insecurity, and relationship problems. Not one of them could sleep with the light off.”

Still nursing a badly broken ankle, Alenur Begum is one survivor who knows that fear too well. Trapped on the second floor of the Tazreen Fashion factory as it burned, Begum recalls a scene of smoke, pitch-blackness, and absolute terror. She survived only by leaping from a broken window, shattering her ankle in the process and leaving her scarred by the memories of her narrow escape.

“After the incident, I felt like I was on the wrong track,” Begum says. “I was having difficulty sleeping and concentrating, so when Caritas started offering activities, I went and received counseling. I feel more relaxed now. Gradually, life is returning to normal.”

But that progress has been slow. Traumatized and hobbled by her injury, Begum has been unable to return to factory work. Through Caritas she enrolled in a vocational training course and is now learning to tailor as a means to support herself and her family. Through the course 14 women gather several times each week to learn from an instructor hired by Caritas. At the end of the three-month course, each participant will be provided with a sewing machine and material as the seeds of a new business—an essential component of the Caritas project.

“I can’t work in a factory because of my injuries, so my plan is to work from my own home,” Begum says. “My husband can sell the clothing that I make, so I am very much hopeful.”

As a mother of two teenage girls, Begum shares the hopes of mothers everywhere—a happy and safe life for her children. But recalling the horrors of her experience in the Tazreen fire, her shattered ankle resting on a small plastic stool, Begum’s dreams for her children’s lives are perhaps more fervent than most.

David Snyder is a writer and photographer living in Baltimore, Maryland. He formerly worked with Catholic Relief Services communication in Darfur.