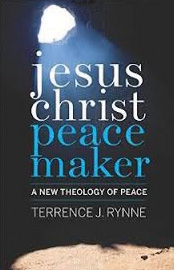 For the first four centuries of Christianity, it was widely accepted among Christians that to follow Jesus Christ meant to forswear the use of violence. After Christianity became the state religion of the Roman Empire, these views softened, ultimately culminating in St. Augustine’s just war doctrine that justified the use of force under certain circumstances.

In his new book, Jesus Christ, Peacemaker: A New Theology of Peace, Terrence J. Rynne argues that it is time for Christians to return to the teaching of the early church. The old debate between pacifism and just war thinking has been superseded by the concept of active peacemaking. From Eastern Europe to South Africa to the Philippines, we have numerous examples of successful nonviolent efforts. This calls for a rethinking of the church’s embrace of the just war doctrine.

In Rynne’s view, Jesus Christ was a model of active peacemaking. Surrounded by movements that urged the violent overthrow of Roman rule, Jesus took a different path. His counsel was not passivity in the face of oppression, but rather active nonviolent resistance in the model of Martin Luther King Jr. and Gandhi. Jesus recruited a core of disciples, built powerful grassroots support for his vision, and used creative symbolic actions to build a movement for change. Jesus, argues Rynne, was not apolitical. His concept of the kingdom of God was not about the end of the world or life in heaven, but rather a new way of living without violence and oppression.

In a few places, Rynne may be pushing the scriptural evidence too far. It is by no means clear that Jesus’ actions are best understood through the lens of active peacemaking. On the whole, though, Rynne’s explanations, coupled with his fine overview of the early church fathers, poses some hard questions about whether the embrace of just war thinking is something the church must now reconsider.