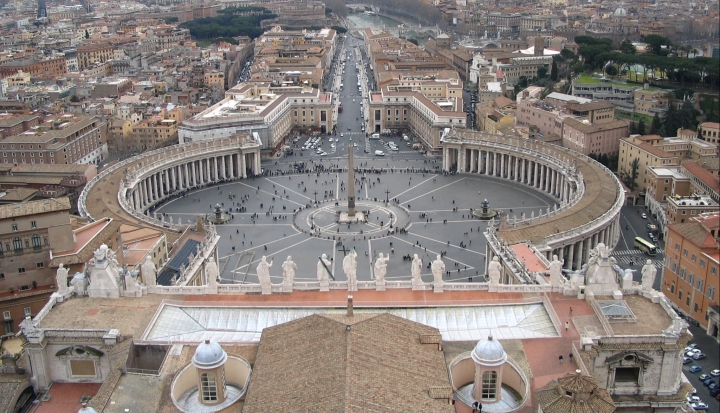 2014 was, in many ways, a depressing year. From the rise of ISIS to the spread of Ebola, stories of violence, tragedy, and fear dominated headlines. In the U.S., the fatal shooting of Michael Brown in Ferguson, Missouri and the subsequent decision of a grand jury not to indict the shooter, police officer Darren Wilson, touched off heated debates on racial justice and policing. The release of the U.S. Senate’s torture report and the prolonged, painful executions of prisoners in Ohio and Oklahoma gave Americans more reason to question their government.

But in the face of pain, injustice, and violence, Catholics and other religious leaders continued to take a stand. Pope Francis remained a consistent voice in defense of the people on the margins of society, and he was joined by other church leaders in speaking out on issues such as immigration, poverty, racism, and war.

But aside from the big stories that dominated global headlines, there was plenty of news within the Catholic Church this year. Here are five memorable stories from 2014 that will likely continue to impact the church in 2015 and beyond:

Catholics hoping for things to be different under Pope Francis certainly got their wish during the October synod on the family. When news broke in late 2013 that the Vatican was looking for the input of laypeople in advance of the synod, many questioned whether the bishops would really listen to the concerns of everyday Catholics. But the synod didn’t shy away from discussing hot button topics like divorce and remarriage or welcoming people in same-sex relationships.

Two sides clearly emerged at the synod: those seeking reform of the church’s tone to be more pastoral and those holding tight to traditional practices, setting off a media circus that embraced headlines about battling bishops. (Francis himself later downplayed the clash between factions, saying it was all just good dialogue.) A midpoint report from the synod was considered by some to be a “pastoral earthquake,” but the final report suggested a longer road to major changes in the way the church approaches family issues.

2. Say goodbye to the life of luxury

Pope Francis received a lot of attention in 2013 for embracing a more humble, simple lifestyle, yet it seems that many of the world’s bishops didn’t think they’d be expected to follow suit.

Germany’s Bishop Franz-Peter Tebartz-van Elst gained infamy as the “Bishop of Bling” for the $43 million he spent on renovating his home, which led to his removal by Pope Francis in March (officially Francis “accepted the resignation” of Tebartz-van Elst). Bishops in Newark, New Jersey and Atlanta later came under scrutiny for their own luxurious living arrangements, and rumors swirled that Francis was furious at former Vatican secretary of state Cardinal Tarcisio Bertone for moving into a plush apartment.

But slowly, the tide is starting to turn. Archbishop Blase Cupich, upon being chosen by Francis to head the Chicago archdiocese, chose to live in the cathedral rectory over the traditional archbishop’s mansion. Perhaps more bishops will make a point to downsize their housing in the coming year.

3. A truce is called between nuns and the Vatican—sort of

After the Vatican revealed the final report of its investigation of women religious in December, the first thing Sister Sharon Holland told reporters was, “It is not a truce.” But to many people in the church who viewed the Vatican’s look into the lives of American nuns as an unprovoked attack, it certainly felt like a war had ended. As had been hinted at earlier in the year, the December final report brought an amicable ending to a six-year inquiry into the work of women religious.

Still on the horizon, however, is the final word on the inquiry into the Leadership Conference of Women Religious (LCWR), and tensions there are still a bit high. Cardinal Gerhard Mueller, head of the Vatican’s Congregation for the Doctrine of the Faith, didn’t make matters much better with this September quote: “Above all we have to clarify that we are not misogynists, we don’t want to gobble up a woman a day!” Mueller also made some admittedly blunt comments to LCWR leaders during a late-April meeting.

For their part, LCWR fanned the flames by honoring Sister Elizabeth Johnson at their annual gathering in August, a move they were warned would provoke the Vatican and the U.S. bishops. And Johnson herself pulled no punches in her remarks when accepting the award, showing that the nuns aren’t backing down.

Outside of covering Pope Francis himself, one of the media’s favorite Catholic stories continues to be whether or not the U.S. bishops are following Francis’ lead. It seems that every major statement or action from the USCCB has to be attributed by the media to either the “Pope Francis effect” causing a turn in the bishops’ approach or a stubborn refusal to get on board with the church’s supposed new direction.

In actuality, those closely watching the bishops probably found that in 2014, not much has really changed. The bishops continued to take a strong stand on immigration reform and publicly applauded President Barack Obama’s executive action on the issue in November. The bishops also remained vocal supporters of a minimum wage hike and have endorsed economic policies to help struggling families and young people. But they continue to be a major presence in opposing the same-sex marriage laws that continued to be enacted around the country this year. In other words, no surprises.

There were, however, some subtle hints of changing attitudes among key leaders in the church. Cardinal Timothy Dolan of New York lost the support of some of his more conservative allies in the church after welcoming the decision of the city to include LGBT groups in the next year’s St. Patrick’s Day parade, of which Dolan will be grand marshal. Dolan also took heat over his criticism of protests against migrants arriving in the U.S., most notably from Ann Coulter.

Boston’s Cardinal Sean O’Malley—perhaps the U.S. bishop closest to Pope Francis—also broke the unwritten rule of publicly speaking out against fellow bishops and calling for swift action against those bishops who have failed to address sexual abuse by clergy. Certainly many bishops have felt this way, but O’Malley’s comments may have been the most candid public critique to date. Perhaps the “Pope Francis effect” is starting to be felt among U.S. bishops after all.

5. Contraception controversy continues to drag on

For much of the past few years, the battle between the Catholic Church and the U.S. Department of Health and Human Services over the required coverage of contraceptives in health insurance plans has been a major story. This year, the bishops took a backseat to craft store chain Hobby Lobby as the primary player in the ongoing saga.

Hobby Lobby, along with fellow family-owned company Conestoga Wood Specialties, took their fight to the Supreme Court this year, arguing that they deserved a religious exemption from the law despite being a secular, for-profit corporation. The U.S. Catholic bishops, not surprisingly, filed an amicus brief in support of Hobby Lobby in the case. The Court issued its much anticipated decision in the case in June in the form of a lengthy set of opinions that reflected the familiar split among the justices, with Anthony Kennedy serving as the swing vote in a 5-4 decision in favor of Hobby Lobby. (Read Kira Dault’s detailed recap of the decision for a full rundown of what the ruling did, and didn’t, accomplish.)

We haven’t heard the last of this story, as the Hobby Lobby case made no determination about nonprofit organizations, and cases from Catholic organizations like the Little Sisters of the Poor are still pending. Meanwhile, public opinion polls have continued to show that a majority of Americans support the contraception coverage requirement, even when employers have religious objections.

Want to relive more of 2014? Be sure to check out the U.S. Catholic archives for stories on the Pope Francis effect, the fight to end the death penalty, student loan debt, and more.

Image by valyag (Own work) [CC-BY-SA-3.0], via Wikimedia Commons