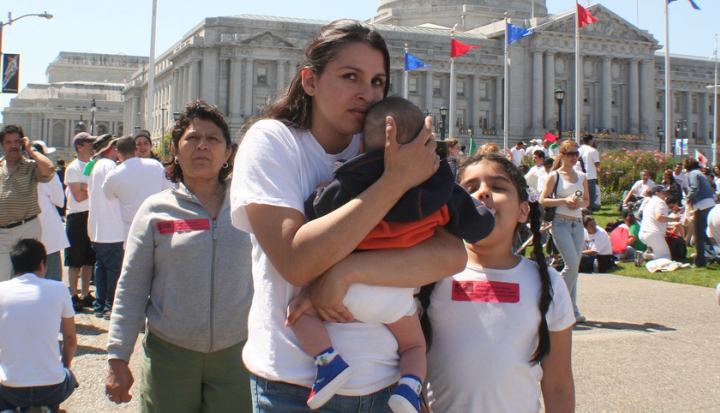 The waves of migrant children fleeing their homeland in search of safety and stability within the United States' borders has been a major news story in recent months, but now it seems as if our public debate (or in some cases, shouting match) about the situation has become the bigger story.

Some Americans were ashamed and angered to see fellow citizens protesting the arrival of busloads of migrant women and children in California, chanting things like "go home" and "U-S-A" as the buses approached. Texas Congressman Louie Gohmert has called the children's arrival an "invasion" and compared it to D-Day. We've even seen protesters use the slogan "Not our children, not our problem."

Then came what the New York Times dubbed "the backlash to the backlash," as religious leaders–especially Catholics–took a strong stand against this kind of rhetoric. The Catholic response to the migrants has been consistently one of welcome and aid, as Catholic Charities offices have been offering assistance along the borders and church leaders like Cardinal Francis George of Chicago have even offered up facilities to help house some of the children. Even Pope Francis weighed in, calling for unaccompanied child migrants to be "welcomed and protected" while condemning "racist and xenophobic attitudes" toward immigrants.

Cardinal Timothy Dolan wrote a blog post expressing his shame over the crowds of angry protesters, saying of their actions, "It was un-American; it was un-biblical; it was inhumane." Dolan called for the recognition of the human dignity of the migrants, repeating the same stance the U.S. bishops have held throughout the immigration debate. "We might argue and yell about policies, processes, and politics," Dolan wrote, "(but) we can never argue about the dignity of the human person or the sacredness of life, or yell at people who need our help."

Oh wait, I'm sorry, Cardinal Dolan –you wanted to be a moral show-off while sending them to someone else's property? http://t.co/ET9iCY521P

How we should respond to the fellow human beings seeking safety within our borders is clearly an issue that needs to be debated, and there are both moral and logistical implications to consider. But the discourse surrounding this issue–both from those in favor of and opposed to welcoming the migrants–has done nothing to get us closer to a solution. We would all do well to take Cardinal Dolan's words to heart when it comes to respecting the dignity of the human person, both when dealing with people from other countries and our own neighbors with whom we disagree.