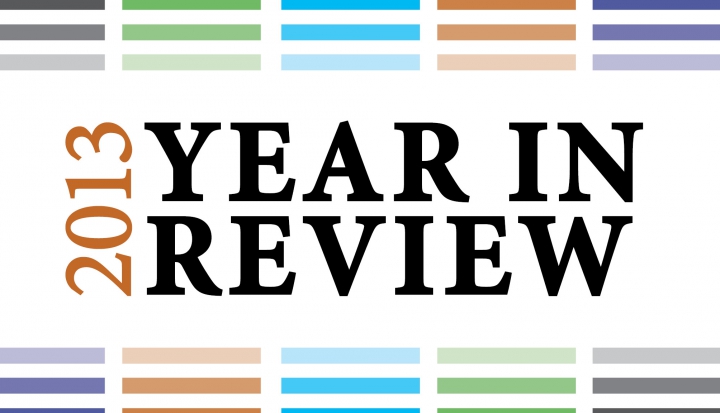 As we prepare to flip the calendar to 2014, it is time once again to look back on the year that has passed.

2013 was an exciting year for the Catholic Church, as the resignation of Pope Benedict XVI sent shock waves throughout the world and the rise of Pope Francis to global fame and acclaim dominated headlines in the secular media. But there were many other happenings that didn’t involve the pope, and U.S. Catholic had plenty of coverage, commentary, and analysis of the big stories of 2013. Join us in reliving some of the highs and lows of the past 12 months:

When the tragic Sandy Hook shooting shocked the nation at the close of 2012, it set in motion a heated debate on the topic of gun violence that continued throughout 2013. The U.S. bishops' conference firmly stated that gun control is a pro-life issue, but Catholics remained divided. In a U.S. Catholic reader survey, only 53 percent of respondents agreed with the bishops that the church's pro-life teaching applies to guns and 44 percent said that gun control laws only punish law-abiding citizens. Meanwhile gun sales spiked, more shootings took place, and even a six-month-old infant fell victim to gun violence. But Congress failed to pass new gun control laws, and politicians who did pass new state laws in Colorado were ousted in a recall election. But at least there was one hopeful story: A school shooting in Georgia was stopped not with violence, but with words.

Around the country, workers stood up for their rights, particularly retail and fast food employees who earn wages that make it hard to break out of poverty. One report found that raising wages for those workers could save the government $7 billion in public assistance that is needed to support low-income families. Walmart remained atop the corporate world this year but continued to be targeted for its employment practices, with one store even taking a collection for its own employees to help them afford a Thanksgiving dinner. Jeffry Odell Korgen called on Catholics to take a stand in favor of Walmart employees, and in our June issue Kim Bobo of Interfaith Worker Justice spoke about the many ways workers are being taken advantage of by their employers and what the church can do about it. The Catholic bishops also called for a just wage, and one town in Washington state took a bold step in voting to increase their minimum wage to $15.

But it wasn't only minimum wage workers who struggled. The death of an adjunct professor at a Catholic university who had been living in severe poverty showed that no one is immune from economic hardship, and increasingly poverty has made its way into suburban communities. As Congress cut food stamp benefits, studies showed that those receiving the most benefits were often working families. The cost of raising children continued to soar, and as Ruth Graham reported in our June issue, many Catholic families are struggling to balance work and family life. In our July issue, Catholic economist Charles Clark offered some suggestions on how to apply the church's social teaching to reducing inequality and decreasing the ever-widening wealth gap in the United States.

Same-sex marriage continued to be a top concern for U.S. Catholic leaders, especially in the wake of the Supreme Court's June decision striking down the Defense of Marriage Act (DOMA). The bishops immediately responded to say the court was wrong, yet many Catholics still had a hard time reconciling the church's stance on same-sex marriage with their own experiences of knowing same-sex couples. An openly gay priest spoke out in favor of the LGBT community, but what garnered more press coverage was Springfield, Illinois Bishop Thomas Paprocki performing an exorcism when his state became the latest to recognize same-sex marriage.

Another court case that sparked debate over racial issues was the much anticipated verdict in the George Zimmerman trial. Zimmerman, whose Catholic faith was touched on during the trial, was found not guilty in the murder of Trayvon Martin. Father Bryan Massingale, an African American priest and theologian, wrote a moving reflection on the verdict and the state of racism in our country. Writer Anthony Walton also tackled the state of America's racial discourse in our July cover story.

The clergy sex abuse scandal continued to plague the church in 2013, both in the form of past cases in Los Angeles and new failings in New Jersey. But current Los Angeles Archbishop Jose Gomez took a strong stand against abuse cover-ups when he declared that his predecessor, Cardinal Roger Mahony, would no longer serve in public ministry, and elsewhere a new group of "whistleblowers" emerged to help bring transparency to the church.

The Nuns on the Bus hit the road again this summer to push for comprehensive immigration reform, and many church leaders supported their efforts. A coalition of Catholic university presidents joined in with their own push to Congress–particularly the Catholic members–to consider the moral implications of the issue and what their own faith teaches about the dignity of the human person. The University of Notre Dame also officially changed its policy on accepting undocumented students, while Catholic Relief Services looked toward addressing the root causes of immigration worldwide.

Health care also remained a hot button issue as the Affordable Care Act officially rolled out in October to less-than-stellar results. Americans remained divided on the law, and Catholic groups continued their legal battle over the law's requirement that employers provide birth control coverage. The fight over whether private, for-profit companies can be exempt from those requirements will likely be decided by the Supreme Court in 2014.

Finally, 2013 saw the passing of a number of notable figures in the church and the world. We at U.S. Catholic paid tribute to Chicago priest Father Andrew Greeley, who was laid to rest in early June. The world also mourned the passing of Nelson Mandela, and historian David O'Brien reflected on the 50th anniversary of the assassination of President John F. Kennedy.

This is just a small sampling of the happenings in the year that is coming to a close. As we prepare to begin a new year, we can pray for resolution to our conflicts, peace in our communities, and a blessed 2014.

Scott Alessi is a former editor at U.S. Catholic.