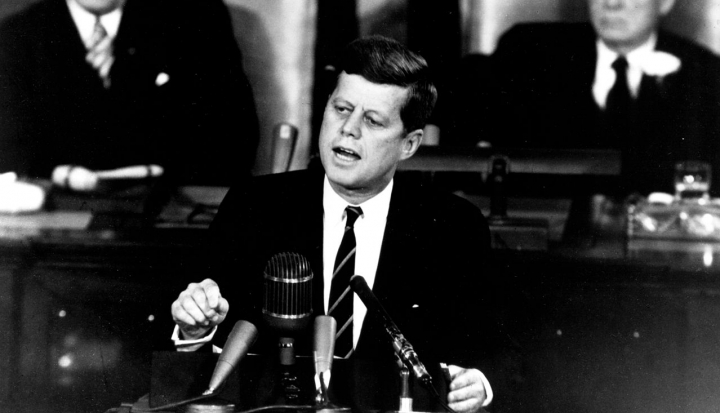 John F. Kennedy’s 1960 election was a moment of arrival of American Catholics into the mainstream of American society. His eloquent inaugural, with Boston’s Cardinal Richard Cushing offering the prayer, seemed to fulfill the promise of American Catholic history. I graduated from the University of Notre Dame in 1960 and like many of my generation, I fell in love with John Kennedy. His intelligence, grace, and willingness to confront hard truths (movement on civil rights, resistance to military options during Cuban missile crisis, his American University address) and, yes, his “style” especially, for me, at press conferences, drew me in.

Then, after a thousand days, came the assassination—an experience of what Catholic peace leader James Douglass, drawing on Thomas Merton, calls “the unspeakable.” That experience, over days of national solidarity in grief, took place amid an amazingly integrated series of rituals at once American and Catholic. For those of us descended from European Catholic immigrants, this was the completion of the American Catholic journey: We were no longer outsiders, but insiders. Later we would face deeper truths about racism and war and nuclear weapons and abortion, and we would never know that integration again. Experience, not ideology, forced reconsideration of our American and Catholic commitments—and responsibilities. It is not too much to say that a long history of American-Catholic negotiation aimed at liberation and integration—liberty and justice for all, including us—ended in November, 1963.

I thought then and think now that this experience was deeply religious, as deeply religious for me as any experience “in church.” Religion is about what matters, and America really did—and does—matter. Sociologist Robert Bellah famously used President Kennedy’s inaugural address to revive consideration of what scholars call “civil religion.” The assassination and its aftermath stirred profound feelings that had much to do with love of God and neighbor—and love’s absence. So did the 1968 murders and mourning of Bobby Kennedy and Martin Luther King. We were stirred by JFK; then he was murdered. How many young African Americans were stirred by Dr. King’s “dream,” and then they too had to face the dreamer’s brutal murder. JFK and MLK mattered, and so did the people and the nation they loved.

There are moments of Catholic life—we call them sacramental—that give us a taste, a sample, of the promise of “people of God” and “body of Christ.” So there were some moments of national experience that give us a taste of what Martin Luther King called “the beloved community.” Words from such leaders touch our hearts because they are connected with actions. I would suggest that our own feelings at these moments—depression and powerlessness as evil hits us on the head, renewed hope and a sense of solidarity, shared responsibility—as we mourn with our neighbors.

So what is a genuine religious response to moments when faith is challenged by unspeakable evil? Recently Pope Francis told us in words that help us dream again of “one nation under God” as we remember Dallas, November 1963: “The primary task awaiting the church is that of witnessing to the mercy of God and encouraging generous answers of solidarity to open to a future of hope, because where hope grows, energies and commitment are also multiplied for the construction of a social and civil order that is more human and just, and new potentialities emerge for a sustainable and healthy development.”

John Kennedy’s life and presidency were tragically shortened. Yet his legacy, formed by a vision that was unmistakably rooted in his faith, has flourished because beyond his intelligence, grace, and willingness to embrace hard truths, even in the most dire of circumstances, he never lost sight of what united our nation and the global community and the inherent hope and solidarity that provides for us.

David O’Brien is professor emeritus of history at the College of the Holy Cross in Worcester, Massachusetts.