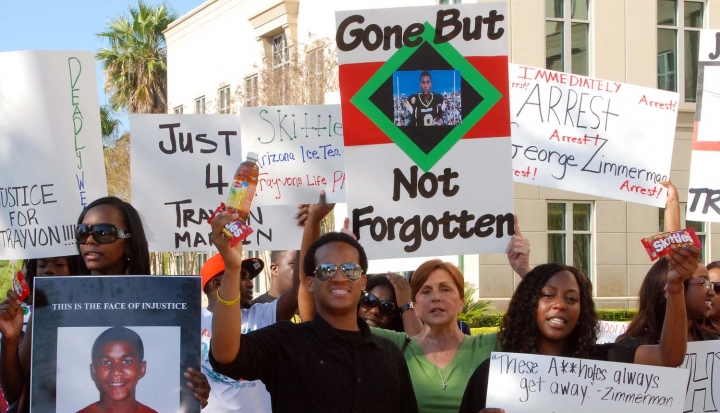 The Blues: a feeling of frustration and sorrow in the face of harsh reality; a refusal to surrender despite deep pain.

“The blues” describes my reaction to the “not guilty” verdict in the death of Trayvon Martin. I cannot be dispassionate about this matter. For I know what it feels like to be a black man in America, regardless of the impassioned denials of so many that race had nothing to do with this case.

I, too, have been profiled by police officers, followed by campus safety patrols and stalked by mall security guards for doing nothing more than walking to my office, shopping for clothes, or enjoying an evening stroll—for just minding my own business. Once, while walking on a busy and well-lit street at night, I was abruptly stopped by the police, rudely questioned and roughly searched, under the suspicion that I was the perpetrator of a robbery—only to later discover that the only characteristic I shared with the actual criminal was the pigmentation of our skin, he being much younger, shorter, and heavier than I. This happened despite my being a priest, a university professor, and a respected member of the community (or so I would have thought). The police offered no apology. Nor, to be honest, did I really expect one. Living with such terror and indignity is to be expected.

You don’t have to wear a hoodie or sagging pants to be perceived as a threat. The very presence of a black man in any space that violates the expectations of those in authority can constitute sufficient probable cause for suspicion and danger.

This is why the verdict of “not guilty” has touched a deep well of resentment, sadness, and horror in many African American men (and in those who love us). For I not only know that if I had a son he could look like Trayvon; I know that I could be Trayvon.

Some have said that Trayvon himself contributed to this tragedy. They argue that he should have walked or run away when confronted by Zimmerman. (Note how they deny that he had any right to “stand his ground” or defend himself against someone who aggressively pursued him without provocation.)

Once again, I feel the blues, but now laced with anger. Because too often I also have been saddled with the responsibility for managing white people’s fear and anxiety, charged with going the extra mile to assure them that I am not a threat. And thus, the anger: Why should I have to constantly interrupt my life and shape my daily pursuits in order to accommodate someone else’s fears? Why must I bear the burden of deciding if I should walk in this neighborhood, or wear certain clothes, or talk in a raised voice, in order to satisfy the fear that is unjustly assigned to me?

Rest assured, I do make such calculations every day because I know that it has to be done. It’s the price required for some measure of acceptance and “normalcy.” But make no mistake, this survival mechanism—carrying the cross of white fears and anxieties—exacts a heavy toll. And sometimes you forget; sometimes you snap; sometimes you just say, “Enough!” And then, as with Trayvon, you get blamed for the consequences of your impatience . . . for your refusal to accommodate society’s suspicions and fears.

Yet, my deepest “blues” in this whole affair stems from the fact that what black men call “profiling” many white Americans consider “reasonable behavior.” For them, it is a self-evident fact that the vast majority of crimes are committed by black males—despite the empirical evidence to the contrary. They deny they are “racists” for they don’t believe that “all” black men are dangerous or malevolent. But at a visceral level, many white people are convinced that “most” of us are, or could be, and thus they are justified in presuming that we are until we prove otherwise.

This is why the language of profiling and the presumption of guilt neither resonates with nor greatly disturbs them. Profiling becomes reasonable; one is just playing the odds. And if a few innocents get inconvenienced or harmed, well, that’s the price we as a society are willing to pay for safety. “Collateral damage” isn’t a reality only in foreign wars.

This is the sentiment expressed in the comments of the only juror to speak publicly. Identified as “Juror B37,” she stated: "I think George Zimmerman is a man whose heart was in the right place, but just got displaced by the vandalism in the neighborhoods, and wanting to catch these people so badly that he went above and beyond what he really should have done. But I think his heart was in the right place. It just went terribly wrong."

Note how this juror states that although things went wrong (for whom???), at least Zimmerman’s “heart was in the right place.” He acted reasonably, trying to protect his neighborhood from vandals. Never mind that his barely 17-year-old victim was not a criminal. Never mind that Trayvon’s heart may have also been “in the right place” of just trying to walk and eat his candy in the rain. He becomes an unfortunate—but necessary—victim of a reasonable desire for safety. Theologically, he is a sacrifice at the altar of white fear.

This is how racism enters the picture. Not in the sense of deliberate and intentional acts of meanness and cruelty. We are dealing with a more or less unconscious racial bias that is manifested in the pervasive association of “black” with criminality, in the willingness to presume the innocence of nonblacks (or, at least, to give them the benefit of the doubt), and, above all, in the inability to empathize with the plight of a black teenager confronted by an armed and “creepy” adult. Social scientists call such bias “racially selective sympathy and indifference,” that is, the “unconscious failure to extend to a minority the same recognition of humanity, and hence the same sympathy and care, given as a matter of course to one’s own group.”

What is at the core of this situation, then, is the nonconscious inability of many white Americans to connect with, much less have empathy for, the experience of their fellow citizens with black skin. The Zimmerman verdict points to a profound deficit of what Catholic Social Teaching calls “solidarity,” that is, the conviction that “they” are “us.” In biblical language, this verdict demonstrates the tragic consequences of failing to see those of a different hue as being our “neighbor.”

Or, as Trayvon’s father put it more simply and eloquently, “They [the jury] didn’t know him as a human being.”

This year we celebrate the 50th anniversary of Martin Luther King’s iconic address, “I Have a Dream.” We forget, however, the distinction he made between “desegregation” and “integration.” Desegregation was the elimination of obvious discrimination and the legal barriers to equal treatment in housing, education, and employment. Integration—the true goal of King’s movement—was a deeper reality. It is the loving acceptance of individuals and groups. King believed that genuine integration demanded that white Americans confront what he called the “nonrational psychological barriers” to human unity. His words are more relevant today than during his life: “A vigorous enforcement of civil rights will bring an end to segregated public facilities, but it cannot bring an end to fears, prejudice, pride, and irrationality, which are the barriers to a truly integrated society.”

The Trayvon Martin tragedy reveals how far we are from realizing King’s dream. The difficult and inescapable truth is that until the white majority confronts and conquers its irrational fears, there will be other Trayvons. And many law-abiding, upright black men will continue to bear the cross of white fear, insecurity, suspicion, and anxiety – and pray for the strength not to have a lapse of discretion that leads to our arrest, injury, or death.

The Blues: a refusal to surrender despite deep pain. I offer my reflections in sorrow, anger, and pain-filled hope. Hoping against hope that this testimony is a catalyst for the conversion that will free us all, whatever our colors, from the tragic insanity that continues to ensnare a nation and endanger its children. And compromise our faith.