“I’m marrying a Presbyterian whose dad is a minister, so we want to get married in her church. Will I still be considered married by the Catholic Church?” 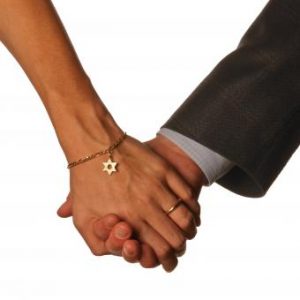 Absolutely, if the requirements of canon law are met. A couple who agrees to marry are the actual ministers of the sacrament. It is they who make the sacrament “happen,” not the minister.

When baptized Christians wish to marry and only one is Roman Catholic, they must receive permission from the bishop of the diocese where the Catholic resides. Church law also requires that a bishop, priest, or deacon “assist” at the ceremony, meaning that he must witness the free exchange of vows along with two other witnesses. In cases of particular hardship, a lay person—or even the Presbyterian minister—can be designated.

The ceremony can then occur in the Presbyterian sanctuary while the assisting priest or deacon looks on. Visiting clergy are often invited to have a role in the ritual (such as offering a prayer or blessing). While desirable, it is not necessary as long as the Catholic clergy is a witness to the free exchange of vows.

“My fiancé is Jewish but has agreed to marry in a Catholic church. Will he have to become Catholic?”

No. The Catholic Church recognizes the natural right of adult persons to validly enter marriage. This recognition is not limited to Catholics or even to Christians.

The marriage of a Catholic to a person who is not baptized is known as a “disparity of cult,” a severe-sounding phrase with the good intention of reminding us that strongly held religious differences need to be discussed and given sufficient attention prior to marriage. These marriages require dispensation from the bishop. The ceremony can be short and can even serve as a vehicle for increased Jewish-Catholic understanding. An invitation could be offered for a Jewish family member to proclaim the first reading since it traditionally comes from the Hebrew scriptures. A rabbi can offer a blessing.

The Catechism of the Catholic Church states that religious differences don’t constitute “an insurmountable obstacle for marriage” if the engaged parties are respectful and open about the gifts and differences they have received from their respective religious communities. Essentially, the church challenges both partners to be conscious of their religious commitments and to express them to one another with integrity. The Catholic party is challenged to do all that is possible to baptize and raise children as Catholics.

“I grew up Catholic and am now more agnostic, but my fiancé wants to marry in the Catholic Church. What do I need to do?”

Many who experiment with agnosticism or atheism return to active participation in their Catholic faith once they marry and have children of their own. A warm welcome and charitable attitude on the part of clergy assisting couples with marriage preparation can go a long way toward laying groundwork for a future return to sacramental participation.

If the agnostic partner has not made a public and obvious rejection of the Catholic faith, the matter is very simple: the baptized person remains in communion with the church, though the union is imperfect because of lack of participation. To use the words of canon law, unless a person has rejected the Catholic Church in a “notorious manner,” he or she remains a Catholic who can request the sacraments at any time.

It’s much more common that some Catholics fall away from active participation than actually reject their faith. Some of the church’s greatest theologians have even taught that a bit of healthy agnosticism is actually necessary for mature faith. Honesty with oneself and with one’s fiancé is strongly recommended, as well as with the priest or deacon assisting with preparation.

“Will my Episcopalian in-laws be able to take communion if we have our wedding in a Catholic church?”

Ecclesiastical norms always have pastoral provisions that allow some flexibility; this is the case not only with the Eucharist, but with the sacraments of reconciliation and anointing as well. A general invitation to all Episcopalian in-laws would be discouraged, but so would a general prohibition.

The momentous event of sacramental marriage appears to be one of those pastoral occasions when an exception can be made if two prerequisites are met: The Episcopalian must profess a Catholic understanding of Christ’s eucharistic presence, and he or she must freely request to receive Christ on this occasion. Since Episcopalian doctrine professes Christ present in the Eucharist, many bishops and priests would presume that they already have a Catholic understanding. To fulfill the ecclesiastical guidelines, it’s important to note that the desire to receive must be more than just a casual wish.