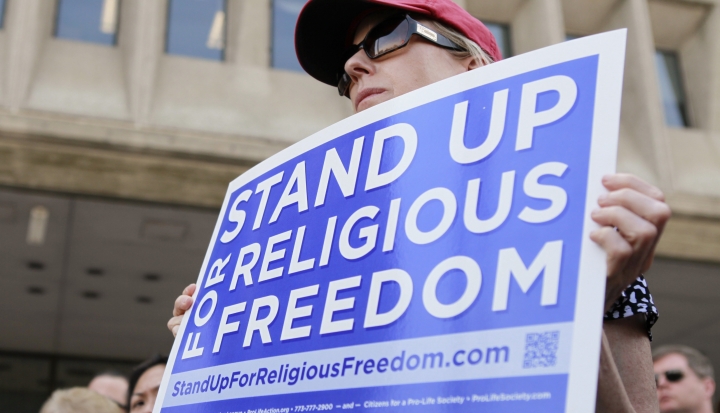 If at first they don't succeed, the U.S. bishops are determined to try, try again. And so this summer, the bishops have announced they will sponsor the second annual Fortnight for Freedom campaign, another two weeks devoted to trying to prove that Catholics' religious freedom in the United States is in grave danger.

For those who missed it, last year's Fortnight was built around the bishops' objection to the Obama administration's regulations that health care coverage under the Affordable Care Act would require employers to provide coverage of contraceptives. Though some Catholics rallied behind the bishops, it didn't seem to capture the attention of the church as a whole and was, by some accounts, a flop. And although the bishops denied repeatedly that the campaign was in any way partisan, it also didn't seem to sway the Catholic vote by a large margin in last November's election.

So now, in a non-election year, the bishops are again launching the campaign during late June and early July. Surely, however, it is no coincidence that the administration has set an August 1 deadline for non-exempt religiously-affiliated employers to comply with the requirements of the Affordable Care Act for mandatory contraceptive coverage. And since the bishops have rejected the latest revisions made to the law to appease their concerns, this is one last chance for the church to attempt to show unity among its members against the administration's requirements.

I find it interesting that a second Fortnight for Freedom was announced in the same week as the hiring of Kim Daniels as the new spokesperson for U.S. bishops' president Cardinal Timothy Dolan. Daniels was chosen for the job in part because, as Dolan himself put it, the bishops needed an “attractive, articulate, intelligent” laywoman to help the church's male leaders bring their message to the female population. It will be interesting to see what role Daniels plays in trying to explain the bishops' objections to birth control coverage for women under their health care plans. And even if Daniels helps the bishops communicate better with female Catholics, the fact that they hired a former advisor to Republican vice-presidential candidate Sarah Palin who has been heavily involved in promoting Republican messages and conservative causes might damage their reputation even further with those Catholics who already believe the bishops' messages are too partisan.

So will the second Fortnight prove more successful than the first? That seems unlikely, since the bishops' religious liberty concerns have garnered a lot less attention in general without a presidential election looming. And even if the campaign were to get more Catholics on board this year, it is doubtful that a louder outcry from the church than we've already heard would make much of a difference in the federal government's policies.

Nonetheless, I don't expect the bishops to back down any time soon, and the Fortnight seems to be here to stay, at least for the foreseeable future. It remains to be seen, however, if the bishops will devote the same kind of energy and attention to the many other pressing topics of concern to Catholics in the United States during the remaining 25 fortnights.