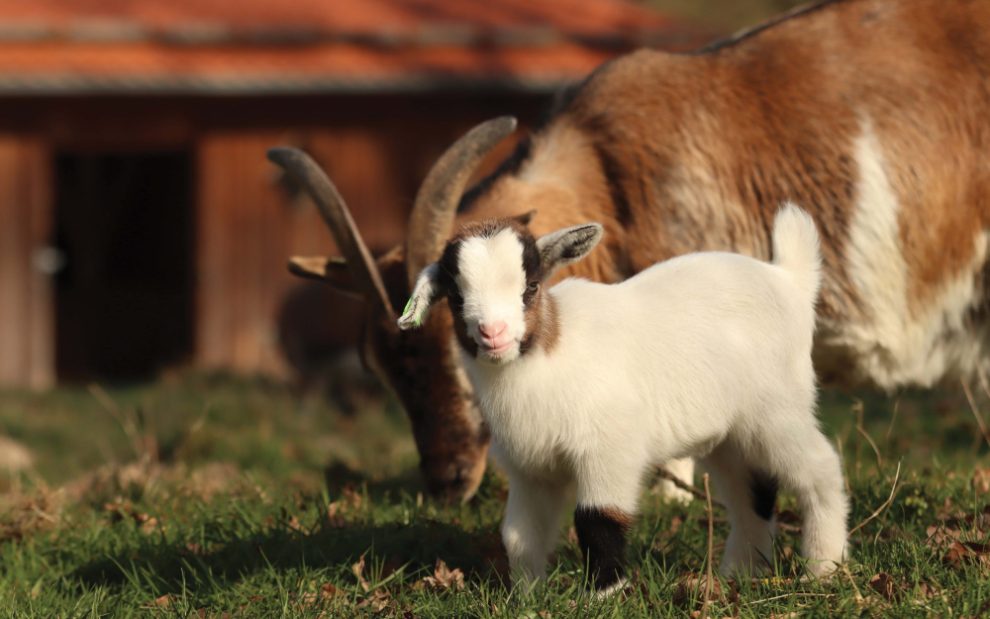 As the sparrow finds a home and the swallow a nest to settle her young, My home is by your altars, LORD of hosts, my king and my God!

Blessed are those who dwell in your house! They never cease to praise you.

The irony didn’t escape me: A mother and daughter were the last to leave a home that had once been the exclusive domain of my daughters and me. I took no solace in the enthusiasm of a stranger’s children who gleefully loaded my dairy goats into their pickup truck. I could only think of how I was breaking a promise to my own children, one I’d had no business making in the first place: Soon after filing for divorce, I assured them we would keep our farm and all the animals they considered children of their own.

One last time I slid my barn’s large metal door closed, saying goodbye to the place where I taught three girls to be caretakers, life givers, and nurturers to an ever changing menagerie of livestock: horses, ponies, donkeys, goat mothers and kids, cats and kittens, ducks and ducklings. My daughters’ father came under its roof rarely, if ever. Sheltered in an embrace of sheet metal and wood, our animal family flourished as our human one diminished, until all of us, creatures both great and small, were forced to find other homes.

At the height of our farm life, I joked I was always feeding someone. Opening the barn door at 5 a.m., I’d distribute grain and hay and fill water buckets. Then in my kitchen, I’d fill a crockpot with vegetables and meat before halving three kiwis and freeing the skin from the cheery fruit for easy scooping. The assurance that the food I prepared would carry my daughters through the day until dinner was equal to the satisfaction I felt when sweet-smelling bales of hay were stacked to the rafters, insurance that my fur-bearing charges would stay nourished all winter.

When my middle daughter decided her 4-H project would be goats, I agreed to create even more mouths to feed by breeding her dairy doe. I ushered the nurslings into creation single-handedly, panicking when white hooves appeared under the tail of the mother and then stopped their advance. It was impossible to know if the first-timer was just unsure what to do next or if the kid was dangerously stuck in the birth canal. I called the vet, holding a cell phone in the hand not gloved to the shoulder in case I would need to pull a newborn into the world. Suddenly the doe’s instinct kicked in, and I dropped the device in a puddle of amniotic fluid on the stall floor right before a girl-kid landed in the nest of towels and sawdust I had prepared. Her twin followed a few minutes after, the only boy I would ever mother. Both were greeted a few hours later by excited girls in plaid jumpers, kicking up dirt with their school shoes as they ran to the stall. Hours later my kids were bottle-feeding their own kids.

Barns have always provided a sanctuary for me. When I was a child, even the slightest spray of rain was an excuse for my sister and me to run to my family’s barn with blankets and books for a Saturday afternoon of reading. The droning of raindrops on the metal roof, nickering of horses, and clucking of ducks was our symphony of safety. My daughters repeated the tradition, often stacking bales of hay to create Lego-like houses, castles, and cozy hideaways for our barn cats.

In Charlotte’s Web, a family favorite, E. B. White describes the barn where the piglet and spider first meet as an oasis of peace, where “nothing bad could happen ever again in the world.” When our house was rendered inhospitable by drunken rages or worse, my daughters and I would flee to this cathedral of goodness, burying teary faces in the neck of a horse or fighting fear by stroking a contented kitten.

The first time I descended a staircase cradling my newborn oldest daughter, I accepted the real risks of motherhood. With each cautious step, my grip on her fragile body tightened, as did my chest weighted by the gravity of both responsibility and vulnerability. I sensed from that vantage point at the pinnacle of a lifelong roller coaster that being a parent meant careening from joyous peaks to heartrending valleys of worry, pain, and even punishment as my children raced toward adulthood.

Somehow in that moment I accepted that the most challenging task of parenting would not be breastfeeding, potty training, or drivers training, but rather the letting go of my children. If mothers and fathers are lucky, “unparenting” means depositing a 20-something at her first apartment or refraining from offering a 30-something unsolicited advice. If less fortunate, however, we are deprived of our ability to offer parental protection by divorce, addiction, or even death. We are forced to confront the stark reality that God alone offers our children authentic refuge.

Eventually I realized there was no location on my acreage safe from the emotional warfare and covert manipulation that buzz through families of the addicted like the hum and crackle of high-tension power lines so common on rural lots like ours. I found respite from the relentless vibrations of my mind and heart only in the eucharistic adoration chapel of my parish, comforted there by my rote recitation of a rosary. After morning barn chores, I began to seek out sanctuaries of stone and stained glass, attending Mass every day.

In these more traditional sacred safe places, something remarkable happened: I began to believe I was indeed a divine daughter of God. I set aside the twisted, prideful notion that it was my job to safeguard myself and my daughters single-handedly. We needed God’s grace and protection. Only after crossing the threshold of God’s home did I muster the courage to step through the door to a new life and security in my God’s arms.

When I bade farewell to the last goat-kid and her mother, I had already moved to a rental in a nearby city. I did it secretly, without saying goodbye, for my children’s safety and mine. Although my teens eventually forgave me for that, the slow emptying of the barn that followed remained an open sore for many years to come. I think I now understand why: Each text message announcing the departure of a barn-child for a better home was a deep cut to their self-image as mothers. They had purchased grain with babysitting proceeds and self-doctored injuries to their beloveds when their father refused to pay the bills, but it wasn’t enough. My girls’ willingness to take on responsibilities not their own, to focus on solving problems even if it meant enabling the abuser, was far too familiar. We also shared another delusion: that parents can defend children from every danger, even those caused by dysfunctional relationships, accidents of fate, or bad choices.

Although my daughters are now well on the way to becoming successful adults, the primal instinct to rescue and protect them still tightens my chest from time to time. That is when I long for the simplicity and safety of that barn, our nest feathered by wisps of hay, cobwebs, and the patience of animals. But then I recall the words of Psalm 84:11 (NABRE): “Better the threshold of the house of my God than a home in the tents of the wicked.” I’ve accepted that I cannot protect my daughters, so instead, in prayer, I place them not in the shelter of the past but upon the altar of their true Father. There I can be sure they are loved—and safe—in the embrace of their king and their God.