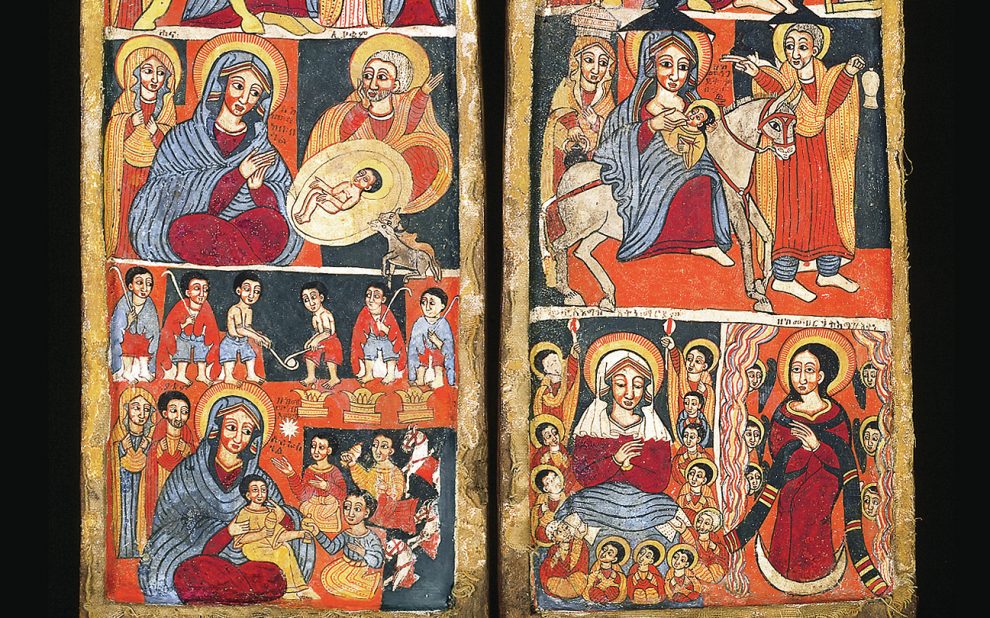 You can poke fun at a lot of things in religion and all but the most severe practitioners will enjoy the laugh. But church leaders often advise, whatever you do, don’t tell jokes about the Blessed Mother. You can kid around about God, Jesus, or the pope and nobody minds. Tell a Mary joke and someone’s bound to be offended.

As a result, I only know one Mary joke. It’s the one you’ve heard before about Jesus standing in the crowd intoning, “Let the one who is without sin cast the first stone.” Immediately a rock whistles through the air and lands at Jesus’ feet. “Mother,” our Lord says wearily, “I thought I told you to stay home today.”

The humor here hinges on Mary’s exceptionalism: She breaks all the rules just by showing up. Mary is conceived without sin. She’s a virgin who is also a mother and a woman who dies without experiencing the corruption of the grave. She’s a potential lesson-buster even when her divine son is the teacher. Mary, as her Magnificat suggests, is the one whom “all generations will call . . . blessed,” which is how Blessed Mother winds up being her most familiar moniker.

This month, the observance of Mary’s assumption falls on a Sunday. This means we get a twofer: the chance to fulfill the obligation of the holy day and Sunday with one liturgy. Celebrating Mary’s assumption on Sunday also focuses attention on the feast, since more folks will likely be in attendance. A summertime midweek holy day is easy to space out or vacation through before we realize we missed it. This year, there’s no excuse. The homilist will have to step up his game to get the message right. What can a preacher say about this dogma that won’t occasion a too familiar yawn?

What’s up with assumption anyway—besides the Madonna herself? There’s no scriptural trace of this event nor did the church fathers or mothers note any such tradition. The assumption is a teaching that emerged gradually in the church’s consciousness through centuries of devotion, prayer, and theology: a product of the sensus fidei (“sense of the faithful”) if ever there was one. Its origins in the people’s sense of what’s right remind us that Catholicism is grounded in both scripture and tradition.

Church understanding is no static thing, locked up and airless, a deposit of changeless truth that suffocates any attempt to nudge consciousness forward. If you’ve heard otherwise, consider that Mary of Nazareth lived 2,000 years ago, yet the tradition concerning her assumption was made dogmatic by Pope Pius XII in 1950. That’s a long, long time for an idea to percolate.

How did the concept of Mary’s bodily assumption into heaven wind up promoted as a teaching? You could say it was born of the love believers have always had for this exceptional woman. Motherly love runs deep in the human story, and Marian devotion is its highest expression. Visit the Holy Land today and you’ll find as many grand sites venerating Mary as those honoring her son. There’s a church dedicated to Mary’s parents, Joachim and Anne—who aren’t in the biblical record, yet our desire to know them made it essential that they emerge from history’s shadow with names and a backstory. You can visit Mary’s well in Nazareth, where her encounter with the angel Gabriel is believed to have taken place. The site honoring Mary and Elizabeth’s visitation is now visited by millions. Manger Square in Bethlehem, where Mary gave birth to the world’s hope, isn’t far from a grotto dedicated to Mary’s breast milk, where hopeful mothers leave their prayers and later mail back photos of the children that resulted. Nazareth contains a house where Mary reputedly lived with Joseph and Jesus.

Motherly love runs deep in the human story, and Marian devotion is its highest expression.

If you want to venerate the event of Mary’s death, the Catholic Basilica of the Dormition as well as the Orthodox Tomb of the Virgin Mary offer two remarkable and poignant places in Jerusalem for meditating on the hour that led to the feast of the Assumption that we commemorate in August.

What happened historically at the deathbed of the woman forever called blessed? Scripture doesn’t pause to tell us. Yet the hunger of believers to know will not be denied. The biblical record tells us that the mother of the Lord, named mother to the beloved disciple at the cross, remained with the community after the crucifixion. Scripture notes she was in the upper room at the birthing of the church at Pentecost. It would have been natural, even after Mary’s death, for the community to remain close to her in their prayers and intercessions.

The first Marian feast day can be traced to fifth-century Jerusalem, where the celebration of the Theotokos, or God-bearer, was observed on August 15. The feast was originally celebrated at a spot recalling her journey to Bethlehem. Before long it was moved to a basilica venerating her tomb.

The relocation of this God-bearer feast is telling. The distance between Bethlehem and Jerusalem is geographically short. The distance between Mary’s identity as the God-bearer and the episode of her death is theologically reduced by this juxtaposition. Luke’s gospel assures us in the annunciation story that Mary is prepared in advance by heaven for the divine indwelling about to overwhelm her story. If prepared before the fact in her perfect obedience, then she would necessarily be preserved after the fact from the tomb’s corruption. For death and its effects are the consequences of sin—a consequence Mary’s immaculate obedience did not engage.

Mary remains a unique vessel of God from her first encounter with heaven all the way to eternity. Moving the God-bearer feast from the nativity road to Mary’s deathbed illuminates that the faithful were connecting the dots in this way as early as the fifth century. Already theological parentheses were being drawn around this woman’s body from start to finish. This unique vessel would find herself encapsulated by traditions of immaculate conception and assumption on either end of her exclusive story.

Some personalities are too infused with divine life for death to make its typical claims on them.

By the sixth century in the Eastern church, the August Theotokos feast had shifted its emphasis entirely to Mary’s dormition, or gentle falling asleep in death. In the West, the feast became known as the Assumption within another century. These two moments sound distinct but are separated only by a heartbeat. The dormition chronicles the manner in which Mary dies. The assumption reveals what happens next.

Assumptions were nothing new in biblical tradition. Elijah has one in 2 Kings 2 when he’s swept into the heavens by a fiery chariot. Moses, Isaiah, and other prophets have similar traditions narrated about their deaths. This is why the transfiguration includes apparitions of Moses and Elijah standing with Jesus—not unlike how Marian apparitions will be reported throughout history. Some personalities are too infused with divine life for death to make its typical claims on them.

All these later appearances of Mary in history, like her assumption itself, entered church tradition not because some pope said so. They’re part of our story because of the sensus fidei, because it just makes sense to a lot of people that the Blessed Mother they know and love chooses to remain close to her children.