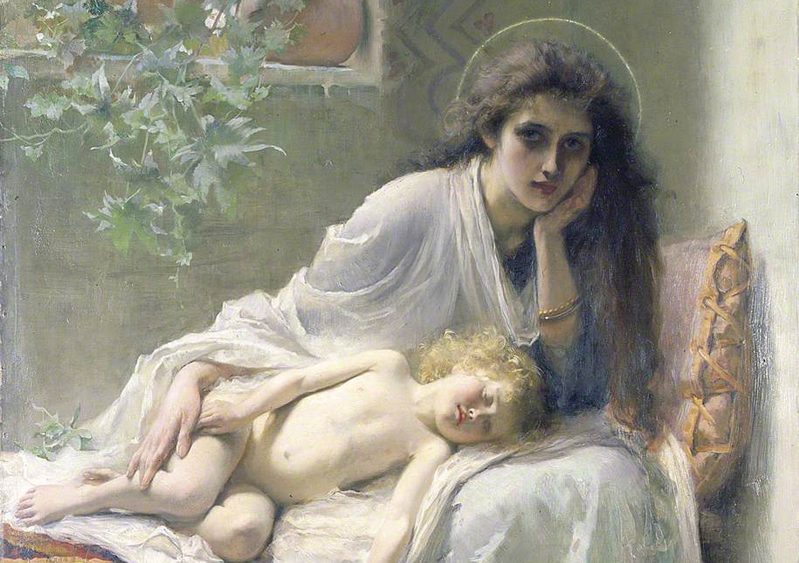 In the northern hemisphere May brings the height of spring blooming. In pre-Christian times May 1 was a feast day heralding the fertility of the Earth, and the month of May was dedicated to different goddess figures such as Artemis (Greece) and Flora (Rome). In medieval times the month of May slowly became dedicated to different celebrations of Mary, whose “yes” to God is the witness to fruitfulness.

By the 18th century May became a time of daily devotions to Our Lady, and it became commonplace to crown statues of Mary with flowers to symbolize her blossoming forth into the world. Today during the month of May, Catholics are invited to create a prayer corner with images of Mary that inspire them.

Scripture reveals Mary as mother, wife, cousin, and friend. Over the centuries she has carried many names celebrating the different qualities she can bring to our lives. I explore eight of these in this article, but there are many others as well: Queen of Peace, Gate of Heaven, and Untier of Knots, to name a few. These names show  the many ways that Mary is present to us in our own need. They are archetypal; they represent qualities each individual can draw upon across time and cultures.

Consider inviting each facet of Mary to be present in your prayer, perhaps taking three to four days to ponder each image and to explore how each aspect of Mary invites you into a deeper relationship with Christ.

One of the most familiar images of Mary is as Virgin. The Virgin archetype is about being whole, belonging to herself and being filled with divine love. She is free of the dictates of family and culture. The Virgin reconciles all opposites within herself and has everything she needs to bring new life.

When the angel Gabriel visits Mary, she is given a choice rather than a demand. Mary is active in her “yes” to the angel’s invitation as well as in her surrender: “Let it be done to me.” God’s unfolding of salvation is dependent upon Mary’s full “yes.”

Call upon Mary as Virgin in prayer to support you in saying “yes” to God’s calling in your life. 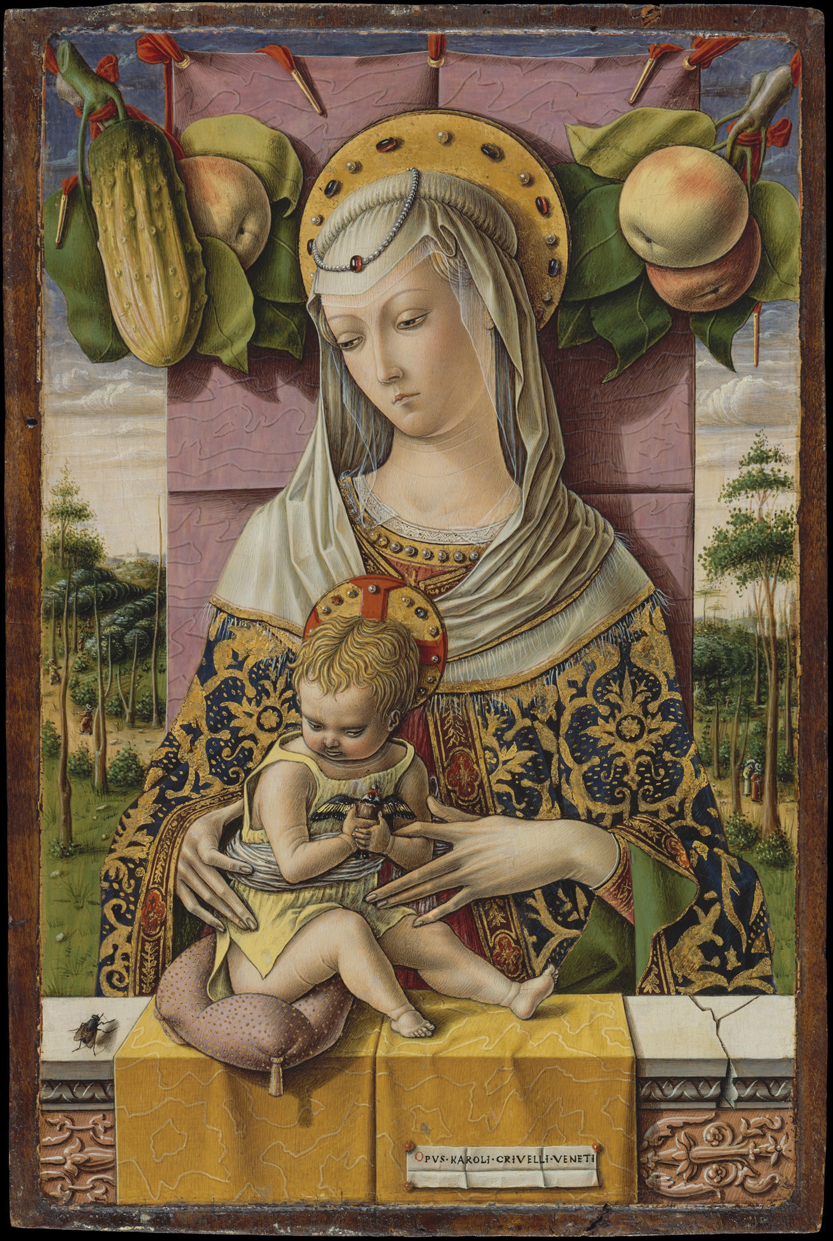 Through this concept of greening, Hildegard interweaves all created life—cosmic, human, angelic, and celestial—with God. We might say that viriditas is God’s love, energizing the world, making it living and fruitful. St. Hildegard had a great devotion to Mary and saw her as preeminently infused with the life-giving greenness of God.

Call upon Mary as Greenest Branch to support you in welcoming God’s life-giving and sustaining grace into your life. 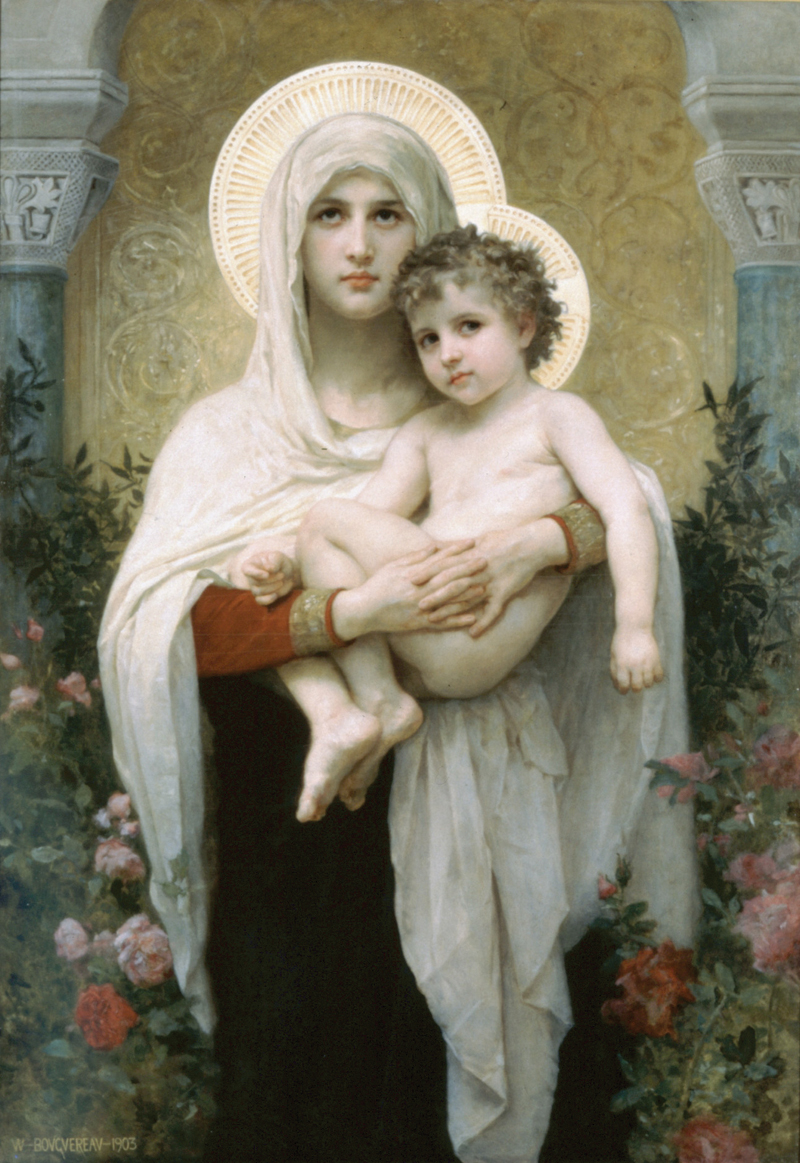 William-Adolphe Bouguereau, The Madonna of the Roses, 1903. Wikimedia Commons.

The rose is often connected to stories of Mary’s apparitions. Mary instructs Juan Diego to gather a large armful of roses as a sign and she becomes known as Our Lady of Guadalupe. Our Lady of Lourdes appeared with a white rose on one foot and a gold rose on the other to show the union of human and divine. Cardinal John Henry Newman once explained:

“She is the Queen of spiritual flowers; and therefore, is called the Rose, for the rose is called of all flowers the most beautiful. But, moreover, she is the Mystical or Hidden Rose, for mystical means hidden.”

Even the rosary is rooted in the rose: In medieval times the five petals of the rose were expressed through the five decades of the rosary.

Call upon Mary as Mystical Rose in prayer to support you in savoring the sweet fragrance of life and your own soul’s slow unfolding. 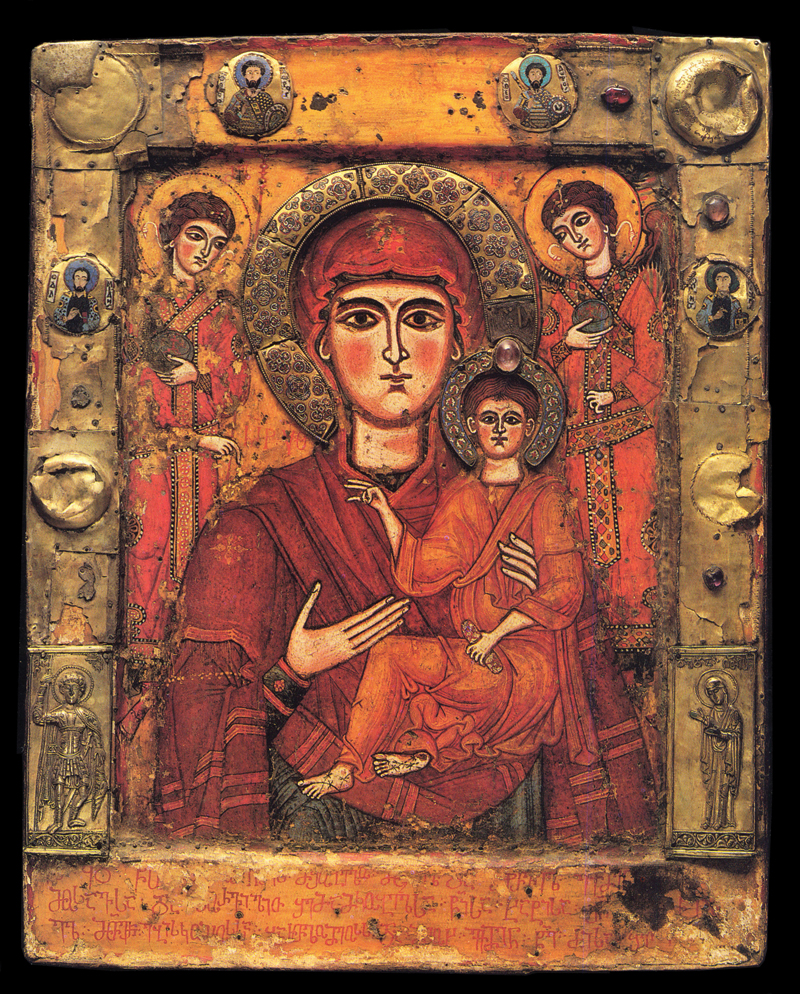 She Who Shows the Way (Hodegetria)

Hodegetria, or She Who Shows the Way, comes from Eastern Orthodox icons that depict Mary holding Jesus as a child while pointing to him as the source of humanity’s salvation.

The image is derived from a legend of an icon believed to have been painted by St. Luke and brought to Constantinople from Jerusalem in the fifth century. Another legend says that the icon received its name because of a miracle performed by Mary: The Mother of God appeared to two blind people, took them by the hand, and guided them to the famous monastery and sanctuary of the Hodegetria, where she restored their vision.

Call upon Mary as She Who Shows the Way in prayer to support you when you need clarity and guidance for difficult decisions.

Star of the Sea

The ancient mariners called their compass a “star of the sea” because of its shape. Mary became identified with this idea, as she is a guiding light who calls us home again to Christ. She is believed to intercede on behalf of seafarers to guide them home, and many coastal churches bear this name.

Mary’s name Star of the Sea seems to have become widespread in early medieval times. There is a plainsong hymn from the eighth century called “Ave Maris Stella.” Stella Maris came to be used as a name of Polaris in its role as a guiding star or North Star, as it was always in view. St. Anthony of Padua, perhaps the most well-known of St. Francis of Assisi’s disciples, would invoke Mary’s name, Star of the Sea, to summon his own strength.

Call upon Mary as Star of the Sea in prayer to support you when life’s waves are difficult to navigate and ask for her help in offering direction. 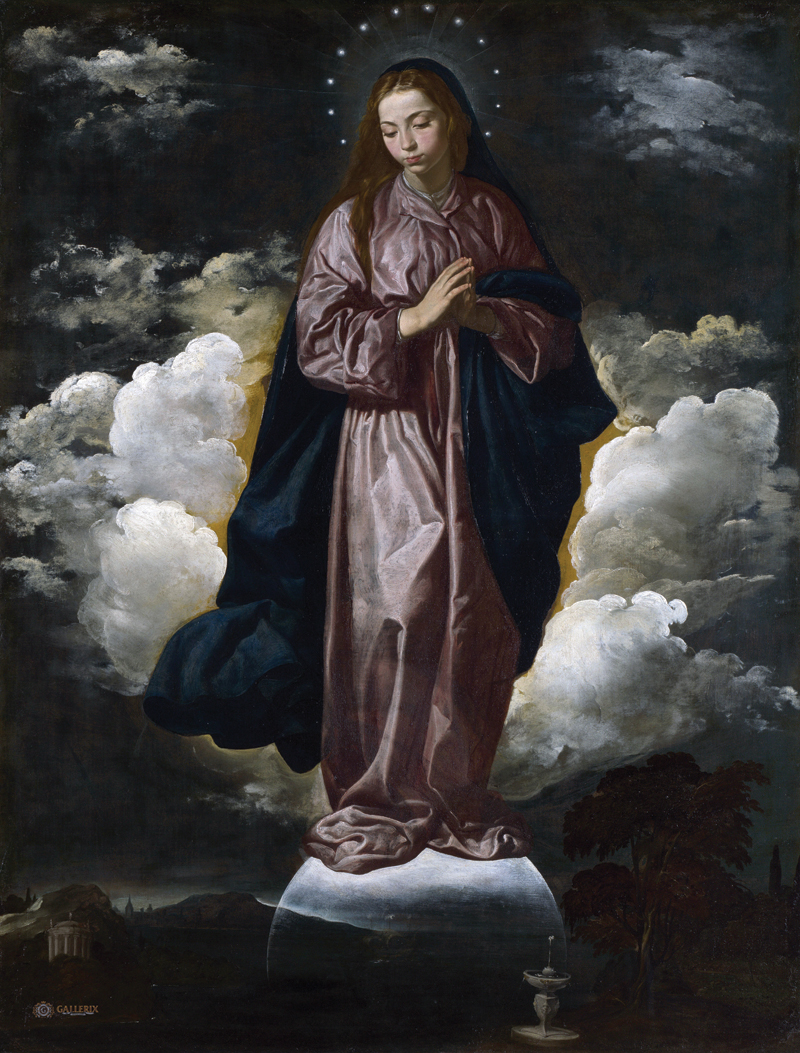 The morning can be full of promise and new beginnings and Mary as the Morning Star is symbolic of the hope of a new day. Many of the early church fathers wrote about the morning star that shines brightly before the sun rises in reference to Mary, who is the light preceding the brilliant illumination of the Sun.

St. Aelred of Rievaulx wrote, “Mary is this eastern gate . . . the most Blessed Virgin Mary who always looked toward the east, that is, to the brightness of God, received the first rays of sun or rather its whole blaze of light.” Mary faces the direction of dawn and reflects its light back to us to offer us hope for what is to come.

In the book of Revelation, Mary is described as crowned with 12 stars, 12 being a sacred number. Much like the Star of the Sea, the Morning Star beckons us, guides us, and shows us the way to a life illuminated by wisdom.

Call upon Mary as Morning Star in prayer to new awakenings in your life and to be open to God’s dawning in your heart. 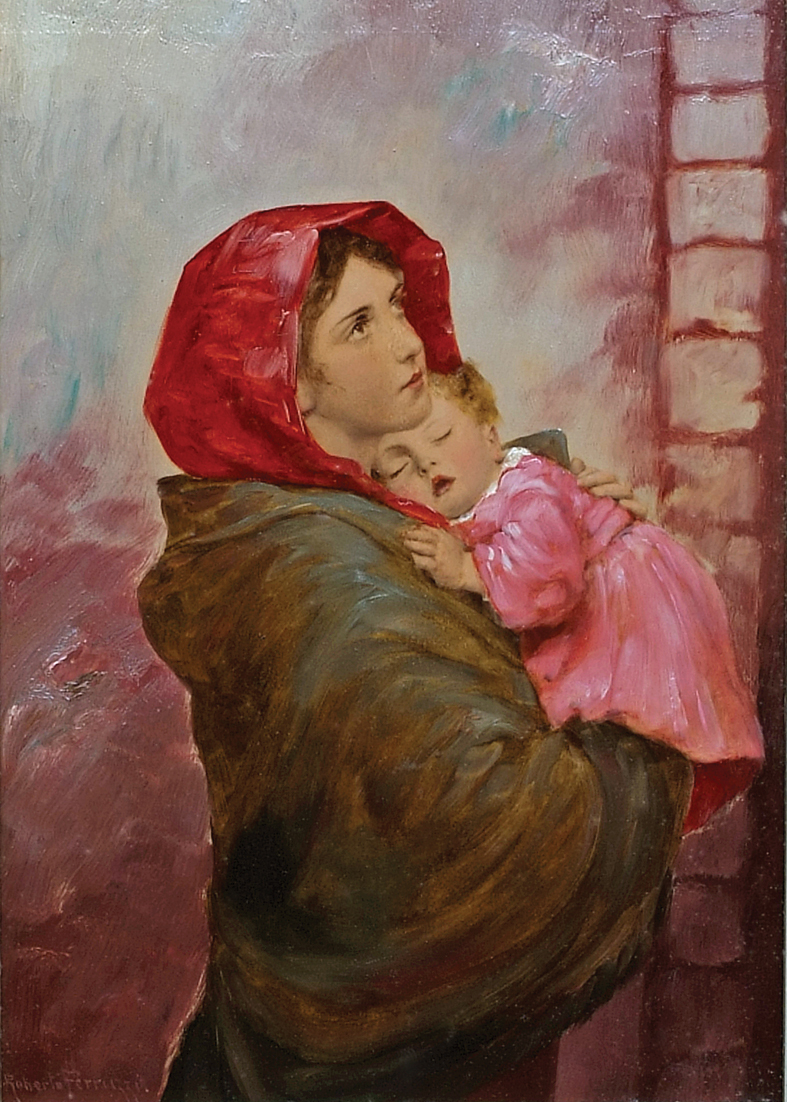 In 2016, called the Year of Divine Mercy, Pope Francis wanted the whole church to be reawakened to mercy, which includes forgiveness, healing, hope, and compassion for all. He called for a “revolution of tenderness” in the church through a renewed focus on these values.

Divine mercy is completely gratuitous and abundant, unearned grace. When we pray the Hail Mary we describe her as “full of grace.” Mary is the embodiment of divine mercy, that lavish gift of kindness and care. Mary as Mother of Mercy extends her reach out to all those who are on the edges: the poor, the hungry, the imprisoned, the refugee, the sick.

Call upon Mary as Mother of Mercy in prayer to support you when and where you are struggling, and ask her to bless your loved ones who are hurting. 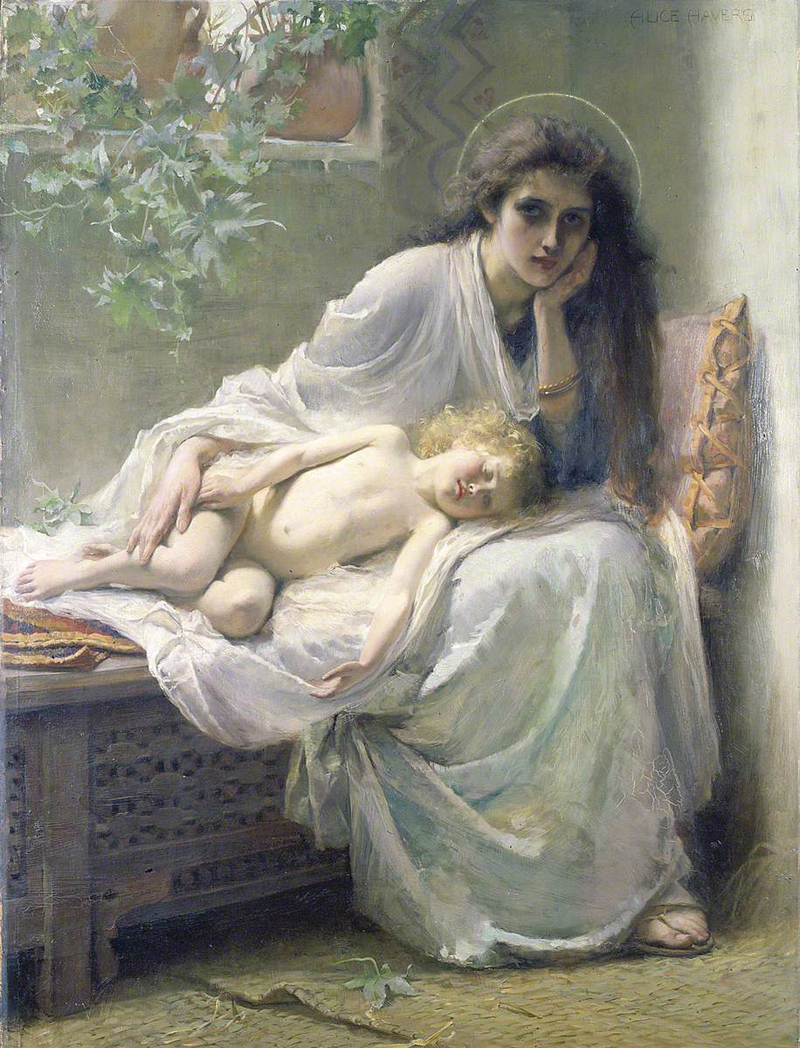 Alice Havers, “But Mary kept all these things and pondered them in her heart,” 1888. Wikimedia Commons.

The Cause of Our Joy

There is a devotion called the seven joys of Mary that consists of praying seven Hail Mary prayers to share the joys Mary experienced on earth: the Annunciation, the Visitation, the Nativity, the Epiphany, finding Jesus in the Temple, the Resurrection, and the Ascension.

When the angel Gabriel visits Mary, he tells her to “rejoice!” When Mary and Elizabeth meet while they are both pregnant, John the Baptist leaps with joy in his mother’s womb at the encounter of the two women. When Mary prays the Magnificat, she says her soul rejoices in God. Mary’s joy brings us the gift of joy as well.

Call upon Mary as Cause of Our Joy in prayer to support you in seeing life’s hidden graces and cultivating a sense of joyful gratitude at life’s gifts.

Christine Valters Paintner is a Benedictine oblate and the online Abbess at AbbeyoftheArts.com, a virtual monastery integrating contemplative practice and creative expression. She is a poet and the author of 16 books on the spiritual life. Christine lives on the wild edges of Ireland with her husband, John, where they lead retreats and other programs online for a global ecumenical community.