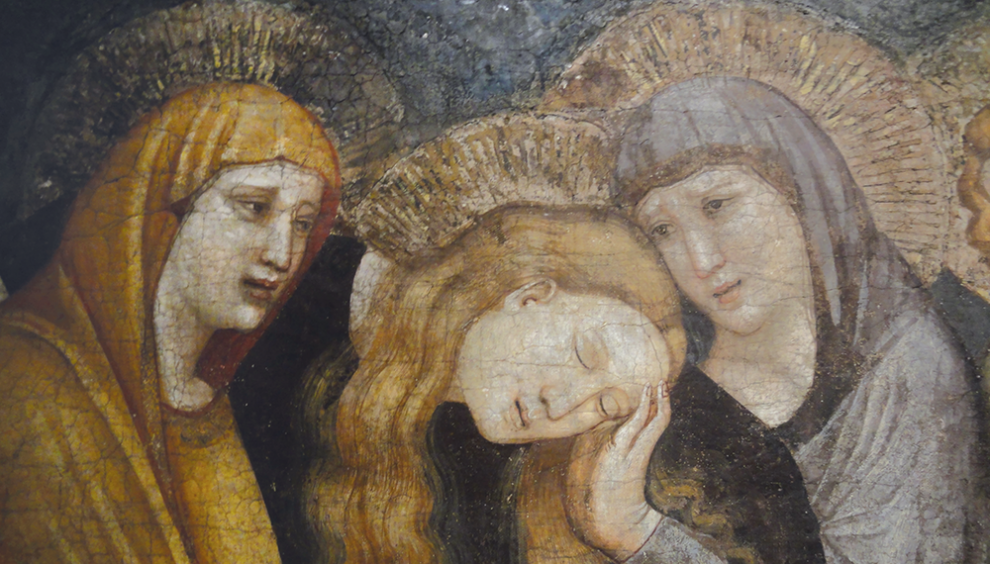 On the Friday after Good Friday, when we should have been celebrating the Easter season, I received an email from one of my graduate students asking for my prayers. His son had died of a drug overdose.

Joshua had struggled with addiction for a decade. He had been hospitalized half a dozen times and was in rehab repeatedly, but nothing stopped the disease of addiction from claiming this once healthy and hopeful 26-year-old.

Joshua’s fight was now over, but a father and mother had lost their son, a sister her brother. Jay, Amy, and Abigail were grief-stricken.

The email and subsequent phone conversation revealed the depth of sadness, the broken-heartedness, the emptiness that accompanies sudden loss.

Jay asked for prayers. In such a moment, there was nothing more appropriate. In the context of prayer, I pondered another parent who had suffered great loss. Another who knew intimately what Jay and Amy were going through.

Just a week prior we had commemorated the death of Jesus: God had lost God’s son. In a very real way, Jay now stood in a unique relationship with God. Both were parents who lost their child to a senseless death. Divine empathy can describe the feeling that God is with us in our pain and suffering, in our joy and celebration. But divine empathy can also refer to our understanding, our feeling of being with God in a profound, unique, and nearly indescribable way. Jay and Amy could empathize with God, their shared grief uniting the divine and earthly realms.

Another parent also grieved and suffered the death of her son: Mary, our human advocate. She brought to birth this child of God. Her aspirations and hopes for him had been nailed to the cross. As I thought of Jay and Amy and pondered the tragic scene at the foot of the cross, I wondered what could have comforted Mary. What could have been said that might have eased her tremendous sorrow? What might have turned her from the corpse on the cross to the faint inklings of hope?

“Tell me about your son,” a passerby or fellow watcher of the horror that had just transpired could have said to the grieving mother. The motivation for the question might have been mere curiosity: How did it come to this? What did he do? Or perhaps the question was an earnest desire to turn the woman from the scene of death to a remembrance of life.

Reflecting on Mary’s experiences with Jesus may give us some insights into her suffering and perhaps ours as well.

The mother of the accused

All the gospels say that the female followers of Jesus witnessed his execution, but only the Gospel of John clearly identifies Jesus’ mother as among them: “Meanwhile, standing near the cross of Jesus were his mother, and his mother’s sister, Mary the wife of Clopas, and Mary Magdalene” (19:25).

The scene presented to us in scripture is one of incredible violence. Pilate hands Jesus over to be crucified. Unlike the accounts in Matthew, Mark, and Luke, in John’s gospel Jesus carries the cross himself—depicting both a literal and metaphorical reality. Only Jesus could suffer this weight, and only Jesus could be crucified for our sake.

It is hard for us to imagine the suffering, the pain, the seeming cruelty of it all. We wear crosses around our neck as jewelry. We bless ourselves with the sign of the cross. We hang crucifixes on our walls. We have totally lost the sense of the horror. A modern comparison would be to place a model of an electric chair on your wall or around your neck. The crucifixion was equally as repulsive. It was meant to be. It was meant to dissuade assaults on the Roman state.

On either side of Jesus, two others were also crucified. John does not tell us their crimes, but Matthew and Mark call them “bandits” and Luke just names them “criminals.” In the fourth-century noncanonical gospel known as the Gospel of Nicodemus, these two are given names: Dismas is the “good thief” and Gestas is the other. Were their mothers at the foot of their crosses? If so, we now imagine three mothers weeping as their sons hang on their crosses, finally suffocating to death.

Pilate had a sign placed above Jesus that read: “Jesus of Nazareth, the King of the Jews.”

The Gospel of John says, “Many of the Jews read this inscription, because the place where Jesus was crucified was near the city; and it was written in Hebrew, in Latin, and in Greek” (19:20).

If she could read, would Mary have affirmed this title? “Jesus of Nazareth,” she could acknowledge; a flood of memories would overwhelm her thinking of this title. The majority of Jesus’ life (John’s gospel suggests at least 27 years) was spent in Nazareth and its environs. But “King of the Jews”—that was the accusation labeled against her son. Never in the gospel accounts does Jesus claim the title for himself.

Staring up at a sign she can barely read and hardly understand, Mary would see only “Jesus, my son, a victim.”

This encounter between Jesus and his mother is heartbreaking and tender. But one of the more unsettling aspects of John’s presentation of the mother of Jesus is that the evangelist never uses her name. When she asks Jesus to intervene at the wedding feast of Cana, Jesus responds: “Woman, what concern is that to you and to me? My hour has not yet come” (John 2:4). Now, from the cross, Jesus again calls her “Woman.”

I can only imagine what my mother would have done had I addressed her as “Woman”! Sulpician Father Raymond Brown, a noted biblical scholar, proposes that this was Jesus’ polite term for addressing women, as evident elsewhere in the gospels.

Whatever Jesus’ intent, we are struck at the distance the word creates. He does not use a term of endearment or of personal relationship. Rather, he identifies Mary by her biology: woman. In doing so, Jesus opens up the possibility for all women (and I would argue men as well) to find their place in this encounter. Those who stand on the verge of absolute grief, seemingly unredeemable suffering, and face an uncertain and frightening future are themselves standing as “woman” or “man” at the foot of the cross.

“Woman, here is your son” (John 19:26). Here, Jesus is not being self-referential. He is giving his mother a new son. Here, he is also giving a new mother to this disciple whom he loves. New relationships are being born from the experience of grief. Mary does not cease to be a mother at the death of her son. But she must now learn to be mother and woman in a new way.

After Jesus’ death, the gospels are silent about Mary. She is numbered among the disciples in the upper room of the Book of Acts 1:14, but we hear nothing of her immediate whereabouts in the days after the crucifixion. Perhaps the beloved disciple cared for her.

As we view Jesus’ death through Mary’s eyes, we should remember that, this side of Easter, Mary could not have anticipated the resurrection. To bequeath to the mother of Jesus a cognition of God’s ultimate plan is to rob her of her mourning. The woman at the foot of the cross is truly grieving. All she has for comfort are the memories of her child.

We can well imagine Mary pondering the prophetic words of Simeon uttered more than 30 years before: “This child is destined for the falling and the rising of many in Israel, and to be a sign that will be opposed so that the inner thoughts of many will be revealed—and a sword will pierce your own soul too” (Luke 2:34–35).

Through the lens of grief, Mary could revisit those strange and wonderful encounters to answer for herself, “How did we get here?” The gospels emerge in much the same way: The death and resurrection of Jesus caused his immediate followers to radically reinterpret his words and deeds. They needed to return to the beginning with the end in mind. Matthew’s gospel makes this abundantly clear: “Do not be afraid; go and tell my brothers and sisters to go to Galilee; there they will see me” (28:10).

Returning to Galilee, to the early years of Jesus’ life and ministry, becomes an opportunity to know more fully the person and mission of Jesus in light of the resurrection. And returning to Galilee with Mary becomes a way to recognize the extent of loss she suffered and to mourn it deeply and authentically for her sake as well as ours.

Perhaps there is more I can do for Jay and Amy, for all those who grieve the loss of their loved ones. Perhaps I can ask them, “Tell me about your son.” In so doing I invite them to return to their own Galilee and revisit the memories of the baby, the boy, the young man at his best moments in light of the resurrection.

With Mary as a guide through deep suffering, we can trust that the crucifixion, however we experience it, is not the last word.

Sister Laurie Brink, O.P. is a Dominican Sister of Sinsinawa and associate professor of New Testament studies at Catholic Theological Union in Chicago. She most recently contributed to a new edition of Biblical Foundations of Spirituality: Touching a Finger to the Flame (Rowman & Littlefield).