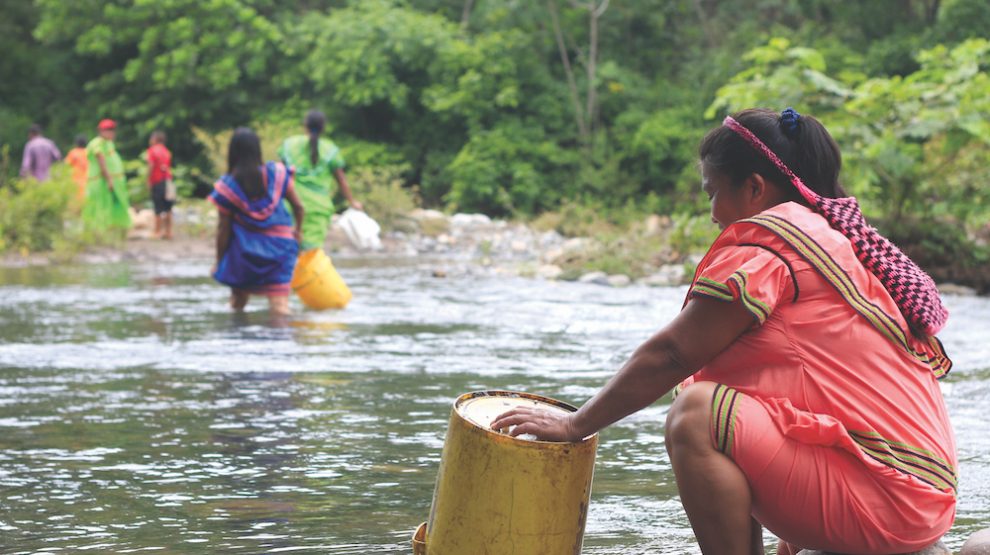 The crab waits beneath the flat stone where the corn is being ground for the traditional drink, chicheme. If crabs get confused, then I suppose this is a confusing experience for our crab. He was taken from the stream yesterday afternoon by the ritually designated children of the household (firstborn or twins) and placed under the grinding stone, free to eat what drips off the sides. “He has a very important part in the festival,” explains Bechi, a Ngäbe elder. “It’s a festival where all are welcome.”

Now at dawn, a good crowd has gathered for the junta, the traditional Ngäbe practice of rotating the workload between families during moments such as the harvest. Hand tools have been laid out in the center of a circle and are ritually “fed,” a few drops of chicheme dribbled on each one. All present then partake in the corn drink, starting with the humblest: the crab then the cats, chickens, pigs, and dogs. The babies followed by the children on up to the elders then drink.

The sequence itself is an important lesson to the young: Care first for the weakest, the smallest—all life is important. Although crabs are a part of the Ngäbe diet, this fortunate crab is brought back to the stream and released after the ritual. Today he was an invited guest, an important participant.

I say a prayer over the tools, animals, and families. We finish by joining hands as we together recite the Lord’s Prayer in the Ngäbere language, then it’s off to the fields. The first fruits of the harvest today will be shared in the primeriza ritual, a concrete expression of the Ngäbe spirituality of gratitude, thanking God for the harvest by first sharing it with others.

Having lived and ministered among the indigenous Ngäbe people of Panama for the past 15 years, things like a specially invited crab guest at a harvest ritual now seem quite ordinary to me. At the same time, the Ngäbe way of living in general calls me to continual conversion, reorienting my understanding of who God is and what it means to truly accept God’s reign among us. A central part of this journey has been an ecological conversion that goes deeper than my previous, often superficial notions of “greening” from a Western worldview.

The Ngäbe understand all of creation and the cosmos as Ju Ngöbökwe (God’s house). In it, we are called to play our particular part in the ongoing plan of creation, living in deep solidarity with all of creation and continuing the cosmic dance expressed in the ancestral myths and songs. The concrete expression of these beliefs and values begins at birth, when a newborn’s umbilical cord is planted with a mango seed. This remains a reference point throughout a child’s life, as grandparents remind their grandchildren that they grow in strength and harmony with the tree of which they are a part.

The image of being integral parts of God’s cyclical plan of creation carries through to the end of life, where the deceased are traditionally buried wrapped in bijao leaves, facing the sunset, and protected on their journey in the afterlife by otoe plants that mark their graves. These practices express a vision of humankind as part of an interconnected web of life, an ordered cosmos. Humans have a great responsibility to maintain the harmony and order the Creator has set in place through our daily actions. This harmony is vital in maintaining the vision and practice of indigenous buen vivir or “full life.”

The most evident threats to Ngäbe “full life” in recent decades have been mega-extraction and production projects such as mineral mines and river dams. In 2012 thousands of indigenous Ngäbe families came down from the mountains to block a 50-mile stretch of the Inter-American Highway in peaceful protest of the government’s abrupt change in mining law, which would expose the indigenous Ngäbe lands to open-pit mineral mining and devastate the forest and the rivers. As the Ngäbe viewed it, this would be the final stage in eliminating them as a people with their own worldview, culture, language, and mode of life.

A violent government attack on the fifth day of the mining protests left two Ngäbe youth dead and hundreds injured. Through the mediation of the Catholic Church and growing international pressure, the government signed the San Lorenzo agreement, which, after a month of dialogue with Ngäbe leaders and the facilitation of the United Nations, led to the signing of a special environmental protection law for Ngäbe lands that completely prohibits mineral mining and requires a special process of consensus for any project that affects the forests and rivers. It is an achievement little seen in Latin America or elsewhere.

Accompanying the Ngäbe through several years of mining and dam protest, witnessing their fierce determination and unity in the face of threats to this patch of God’s creation to which their cultural identity is so intimately connected, and seeing their refusal to accept the promises of supposed “progress” that such projects would bring has brought me to a clearer understanding: The poverty of ecological degradation and cultural annihilation cannot be mitigated by a simple rise in economic indicators. It’s worth noting that no ritual or act of reciprocity in the Ngäbe vision can bring balance and equilibrium for the intentional destruction of whole forests or ecosystems.

In addition to the mega-extraction projects, a more subtle threat to Ngäbe “full life” is more palpable every day: the imposition of an ever more dominant ideology that separates us from the rest of creation, turns natural resources into market commodities, turns human relationships into fierce competition, and reduces the purpose of our very existence to the consumption and accumulation of material goods. It’s an ever more pervasive worldview that replaces God with market fundamentalism.

Yet the resistance and prophetic witness of indigenous peoples grow alongside those threats. Although I want to be careful not to romanticize the lives of indigenous peoples, who also have their internal struggles and difficulties in the midst of their human frailty, I do believe they are clear signs of the other possible world.

At times, that prophetic voice shouts loudly, as when thousands of Ngäbe families traveled down from the mountains to bring the country to a standstill, protesting projects that would tear a hole in the earth and, as one Ngäbe leader put it, “rip out the heart of the mother who sustains us.” More often, the prophetic voice of the Ngäbe and other indigenous peoples is less apparent, almost unheard, like the mother who turns to her oldest child and gently says, “Find a crab, the harvest is ready.”

In the midst of many difficulties faced by indigenous communities, we missionaries are blessed to witness the next generation of indigenous youth valiantly continuing their ancestors’ struggle for “full life.” In January 2019 Pope Francis encouraged indigenous youth gathered from across Latin America at our Soloy Ngäbe parish, saying, “Be grateful for the history of your peoples and courageous in the face of the challenges that surround you, to move forward full of hope in building another possible world. . . . May your actions . . . be a reaction against this ‘throwaway culture.’ ”

Grateful for the profound impact the Ngäbe have had in my own life and faith journey, I hope the wider church comes to see the particular ways in which our indigenous brothers and sisters manifest God’s reign in many profound and simple ways, giving us glimpses of the other possible world. May their prophetic witness to the gospel be cause for our deepening commitment to be allies, true partners who act in profound solidarity with marginalized peoples and all of creation. May we recognize them as hope-filled guides in building new foundations based on the harmonious relationships our loving God has always intended and commit ourselves to a world where all life is respected as sacred, where all are truly welcome.

Father Joe Fitzgerald is a Vincentian priest originally from Philadelphia. He holds a doctorate in theology from the Pontifical Bolivarian University in Colombia and is the author of Danzar en la casa de Ngöbö (Editorial Abya Yala).