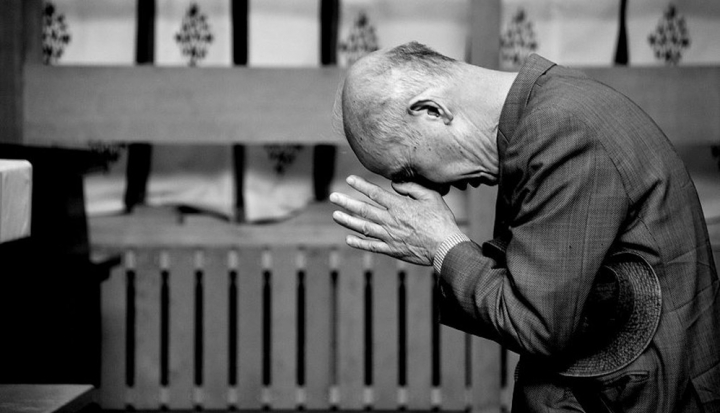 For most of my childhood I was a little bit afraid of my father, a stranger who didn’t arrive home from his downtown office until after 6 p.m. and who then demanded silence while he watched the local television news, the network news, and another half hour of local reports before we ate dinner as a family at 7:30. If my brother, Kevin, managed to make my sister, Sue, suppress a laugh so that milk came out of her nose or someone made the mistake of putting their elbows on the table, we all flinched if Dad stood up quickly. If the offense was serious enough, he’d make his slight, 5-foot 8-inch frame seem as tall as he could, bite his tongue in frustrated concentration, and then deliver his belt to someone’s backside.

But if I stopped by my parents’ bedroom later the same evening I’d find my father on his knees, elbows on his mattress. There he would pray and read from a little book called My Daily Bread, its red leatherette cover folded back upon itself and the pages well-thumbed. Sometimes I could see his lips move, but I never knew what evening prayer he was saying by rote.

My dad prayed with intensity, his hands covering his face and head bowed in deep concentration. His hands always hugged each other, right thumb over his first left knuckle, no other digits interlaced. Though this was not the “little steeple” Sister Marie Blanche taught us in grade school as the best way to “point to heaven,” it seemed more like his warm handshake and therefore better suited for his petitions. His focus was so singular in Mass that when the rest of my family complained about the crying baby who wouldn’t be quiet he had no idea what we were talking about.

When it came time to choose a sponsor for my confirmation just before I turned 15, someone who would continue to guide me in my faith as I became an adult, the choice was complicated by the fact that part of my family and I were living in a new place. When I was 13, my parents and the last two of seven siblings, my younger sister and I, moved from the only Catholic church and school I ever knew to a parish in Richmond, Virginia. The usual candidates of close family friends or older siblings weren’t available because we had left them behind. So instead I chose a man who I knelt alongside in church my entire life: my father.

In the midst of adapting to a new parish, new school, and new home, one thing stayed constant: my silver-haired father on his knees at our first Mass in Virginia and at every one after that. Despite the fact that the Mass was in a gymnasium-like sanctuary with folding chairs and no kneelers, despite the cold linoleum and potential wrinkles to his suit pants. All of a sudden, I spent a lot of time in church standing over my father in a suit kneeling on the ground. I remember the novelty of considering his fair scalp, sometimes sunburned, and the fact that he seemed suddenly more vulnerable.

After the move he started coming home from work a little earlier; we sometimes talked before the news and even about it. After I was given the honor of reading aloud my letter to the bishop asking for the sacrament of confirmation, I told my dad that I was glad to be chosen, but nervousness at the idea of speaking in front of the entire congregation caused me to suffer some severe gastrointestinal distress. He confided in me that he had suffered from severe anxiety as a child and young adult, needing extensive counseling. As the youngest in a dysfunctional family, he seemed to bear the brunt of his mother’s eccentricities. When she divorced his father, she routinely told her young son that his father was spying on them from the woods. Anxiety remained a struggle for my dad into adulthood and it was something we had in common. Years later he would thank me for scheduling my wedding in the early afternoon because that meant he would throw up for only half a day.

As we got ready for church on my confirmation day, I chose a navy peasant dress with lace accents, a rare pair of pantyhose and high heels. Dad made sure I appreciated his choice of a red tie, the color symbolizing the tongues of fire the day the Holy Spirit first descended on the apostles, he told me.

On this day I would become an adult in my faith, through anointing with holy oil and laying on of hands. I had chosen my new name and patron saint, Brigid of Kildare, a respectful nod to the Irish heritage my father worked hard to ingrain in all of us. My father and I filed into reserved seats near the front; the metal chairs had by then been replaced by wooden benches, but without kneelers. After the last reading and a homily, I ascended to the ambo to the right of the altar table.

My letter was brief, thankfully, but that didn’t stop my voice from tentative trembling. As I struggled through the lines and pushed my owlish eyeglasses back up my sweaty nose, I spotted something that strengthened my resolve: my father in the third row, but instead of the red tie, I saw a flash of white. He was in total surrender to his emotions and pride as he dabbed his eyes with one of the cotton handkerchiefs my mother starched and ironed every week.

I managed to get back to my seat without teetering off my new wedge platforms. Moments later, the priest said “Let us give thanks to the Lord Our God” to signal the start of the eucharistic prayer and consecration. As always, my dad was the only one who went to his knees.

I paused a second. Would the floor soil the hem of my dress? In the tight space might I catch a splinter that would ruin my only pantyhose? I tucked my feet, one stacked on the other, around the bench leg, then lowered myself using the bench as support. For the holiest part of the Mass, I knelt. I was proud to join the man who was never afraid to show his faith and humility before God by taking a knee.