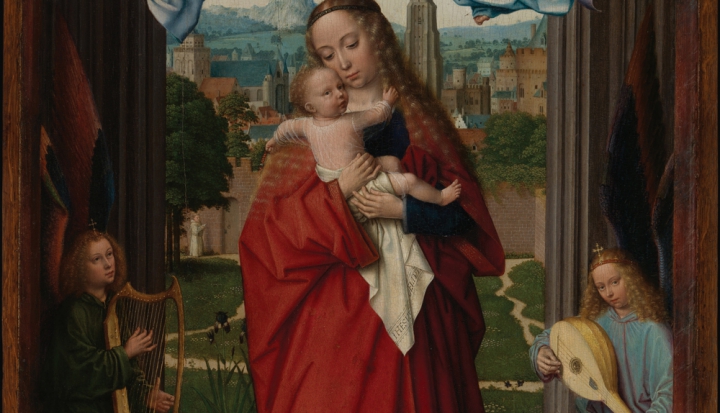 This essay is the first in a two-part series on clothing in the Bible. You can read the second part here.

It all started with a question: “Isn’t she supposed to be wearing blue?” This from a woman peering doubtfully at a Byzantine icon of Mary dressed in a shade of red normally reserved for Academy Award nominees preening on the Oscars’ famed carpet. I explained that in art red symbolizes Mary’s humanity, being the color of our life’s blood. Mary also sometimes wears sky blue to remind us of the divinity she carried within her. When Mary dresses in white, as in depictions of Our Lady of Lourdes, we recall her purity of heart. Her brown attire, as the Lady of Mt. Carmel, reminds us of her renunciation of worldly values.

Mary has, in fact, a considerable wardrobe in the history of art. Stars frequently appear on her clothes. A trinity of stars, located on her veil at her forehead and on either shoulder, declares her perpetual virginity: before, during, and after the birth of Jesus.

Stars encircling her head or halo are a reference to the woman in Revelation Chapter 7 who wears a crown of 12 stars. Mary may be embedded in a landscape of stars like the Lithuanian Virgin of Ostrabrama or her cloak may be covered with a cosmos’ worth, as depictions of Our Lady of Guadalupe demonstrate. A predominance of stars suggests her immaculate conception.

Mary isn’t adorned only in solid colors. She frequently appears in a floral gown that tells us she’s an enclosed garden, which again points to her virginity.

“But what did Mary really wear?” my companion persisted. “In the Bible?” Alas, the gospel never whispers a word about Mary’s wardrobe. The Bible’s rarely forthcoming on the matter of who wore what. Just think: This subject that involves us in a long chain of decisions every day, from undergarments to outwear, from footgear to fascinators, is of little to no importance in our sacred texts. For much of human history the average person wore what was appropriate to the climate and what was available. Period.

It bears noting that biblical people are hardly described at all in terms we regard as standard: from the color of their eyes to the texture of their hair, from the shape of their noses to an estimate of their weight. It’s so typical for biblical writers to ignore these details that when a physical element does gain a mention we know it will play into the advancement of the plot. So we learn in the Book of Judges that Eglon, king of Moab, was “a very fat man.” Eglon’s girth is significant because of the nature of his demise: His enemy Ehud will thrust a dagger into Eglon’s belly, an easy target. “The hilt also went in after the blade, and the fat closed over the blade” (Judg. 3:22). The assassin, under these circumstances, does not get his knife back.

In a similar way, the gospel informs us that Zacchaeus the tax collector is a short fellow. Why else will he be obliged to climb the sycamore tree to catch a glimpse of Jesus?

When it comes to appearance, the Bible warns us of the tendency to judge a person superficially. The prophet Samuel is tempted to choose the second king of Israel from Jesse’s sons based on stature; the Lord advises against it. Happily, when young David does arrive on the scene, he’s attractive: “ruddy, and had beautiful eyes, and was handsome” (1 Sam. 16:12). Of course, these facts lead him to become something of a lady’s man and get him into all that trouble with Bathsheba. Biblical good looks frequently signal problems ahead: consider Jacob’s “handsome and good-looking” son Joseph, who gets grabbed by Potiphar’s lusty wife (Gen. 39:6–20).

Biblical women, it should be said, are portrayed almost exclusively in one variety: beautiful. We’re clued in early that “the daughters of humans” are so gorgeous, they attract divine beings to mate with them in the peculiar story of the Nephilim (Gen. 6:4). This explains why Abraham’s wife Sarah is repeatedly described as irresistibly lovely—as is Rebekah, Rachel, Bathsheba, David’s daughter Tamar, Judith, Esther, Tobias’ bride Sarah, Susanna, and Job’s daughters. The Song of Songs is one long languorous look at how desirable human bodies can be. Prettiness is a double-edged sword, often attracting fatal attention for the pursued or the pursuer. Wisdom writers caution that a beautiful woman without judgment is no prize (Prov. 11:22).

Blanket assignments of beauty aside, our sacred texts show a remarkable lack of interest in describing the features or figures of characters. It’s no wonder, then, that clothes don’t make the man or woman in most stories. Except on rare occasions when they do. In such instances, we know at once the detail is significant.

Let’s look at some exceptions. Clothing first makes the page when Adam and Eve get some. First shame causes them to sew fig leaves into awkward loincloths. Second shame—perhaps divine embarrassment for the result—leads God to replace this vegan chic with garments of skin (Gen. 3:7, 21). Third shame arrives after the great flood, when Noah becomes intoxicated and disrobes. Son Canaan finds his father’s condition hilarious, while Noah’s more mature sons discreetly cover dear old dad with a robe.

The next attention paid to wardrobe is Jacob’s deception of his blind father. To steal hairy Esau’s birthright blessing, Jacob appears in his brother’s clothes and covers his hands and neck with sheepskin to feel more rugged to the touch. The ruse works. Jacob will be deceived in turn when his own sons present him with a blood-soaked tunic and declare their youngest brother dead. This coat is instantly recognizable as Jacob’s vanity garment for his favorite son, Joseph.

Clothing remains a form of entrapment in Jacob’s family. Young Joseph, enslaved in Potiphar’s house, loses his cloak to Mrs. Potiphar, who then uses it as an indictment against him. Meanwhile, brother Judah does wrong by his widowed daughter-in-law Tamar in not providing her with a son as the law demands. So Tamar puts off her widow’s garments and covers her face with a shawl. Not recognizing her, Judah sleeps with Tamar, fulfilling the law unawares.

After the Potiphar incident, Joseph goes to jail but eventually emerges restored to glory by Pharaoh. Joseph is enrobed in Egyptian linens and gold chains. This foreign finery is sufficient to disguise him when he encounters his wicked brothers again. Only when Joseph chooses to come out of concealment—“I am Joseph, your brother”—do his siblings recognize who their persecutor is. The ruling of Genesis on clothing seems to be that garments are necessary for modesty. Yet clothing is also costume, concealing who we really are.

I think most of us would agree that we utilize clothing as much for disguise as we do for basic protection. This helps to explain why it can take so long to put together an outfit in the morning. Or why we may change our clothes several times in a single day. We’re not just dressing for the weather, but also for the occasion and the encounter. Who do we intend to be today? To whom will we be present, and what will the meeting require of us? What do we hope our attire will say for us that we can’t say for ourselves? How are we revealed by the way we dress? And, indeed: What are we trying to hide? 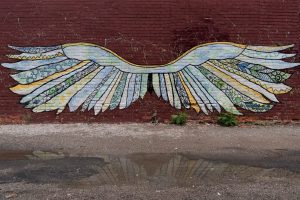 Messengers of comfort and courage: The truth about angels