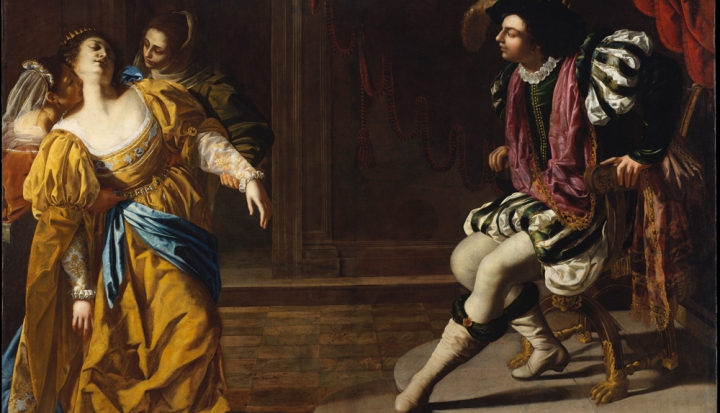 This essay is the second in a two-part series on clothing in the Bible. You can read the first part here.

We turn to the Bible for guidance on many matters, but rarely for fashion tips. That’s because scripture doesn’t describe what folks were wearing in great detail, when it mentions attire at all. Yet it’s inaccurate to say clothing is irrelevant in these texts. On the contrary, it carries symbolic significance whenever it’s featured.

Take color, for example. When the prophet Daniel describes the Ancient of Days in his celestial vision, the Almighty is wearing white and has hair white as wool. While this description encouraged the unfortunate depiction of God as the old white guy, Daniel’s divine image never addresses skin color (or skin at all). This divine portrayal is imitated in the Transfiguration of Jesus, whose clothes become dazzlingly white, and also in Revelation’s Son of Man, whose hair is like wool or snow. Every celestial being from Genesis through Revelation makes an entrance in white garments. Clearly, if you’re packing for heaven, you won’t go wrong with white.

Purple is featured in biblical descriptions of royalty, the military, and the wealthy. Priestly vestments and sanctuary linens are woven with violet and purple. Who gets to wear a robe of this shade is serious business in the books of Maccabees and Daniel, where purple attire is a sign of the king’s favor. The praiseworthy wife of Proverbs wears purple linens, no doubt spun and dyed by her own weary hands. In a gospel parable, the rich man who ignores starving Lazarus sports purple robes at his sumptuous table. The cloak of mockery hung around Jesus’ shoulders by abusive Roman soldiers is of the royal hue. It’s intriguing that a color now coopted by preteen girls and elderly women was once an indication that you were Somebody. As the dye became simpler to manufacture, it lost its exclusive dimension.

Scarlet is a third color that appears in scripture, but with mixed esteem. A touch of scarlet is woven into priestly garments and sacred linens for ritual use. The shade also adorns harlots and Revelation’s contemptible Whore of Babylon. The businesswoman Rahab, who assists Joshua in the conquest of Jericho, uses a scarlet cord as a signal. The curious blend of sacred and profane uses for this color reminds us that red, too, was a difficult color to produce and would have been distinctly uncommon.

Anyone not wearing these colors was, presumably, clothed in the natural tones of the fibers they wove. But let’s not forget jewelry. Silver and gold were in abundant use for ornaments then as now. Signet rings on the fingers of kings and the wealthy, nose rings for wives, bangles for women, and neck chains for men, were worn by any who could afford them. But finery was a choice, not a requirement. The young widow Judith chooses to wear sackcloth under her widow’s garments, until it becomes necessary for her to save her city. Then she dons festive clothes along with a diadem, anklets, bracelets, rings, earrings, not to mention “all her other jewelry” (Judith 10:4). My question is: Where did she find room to wear the rest? These adornments, remember, were Judith’s body armor for battle. Any woman who’s ever faced the rigors of a blind date knows just how she felt.

As extraordinary as Judith’s closet must have been, she may well have been outdone by Esther, teen Queen of Persia. Though Esther is described as naturally lovely, this fact only makes her a candidate for an arsenal of cosmetics and seven palace maids to assist in augmenting her look. It takes 12 months of spa treatments to prepare Esther for her first night with the king. Yet Esther privately contemplates her splendid garments and enhanced appearance with misery and calls her diadem “a polluted rag” (C:27). For both Judith and Esther, flashy attire is simply an exercise of feminine power in a cultural context that afforded them little else as leverage. Today’s beautiful people on magazine covers might have taken other routes to command attention. Biblical women were constrained to demonstrate desirability, the ability to produce sons, or both.

Along with Judith and Esther, the Song of Songs is a third biblical book that pays a great deal of attention to physical appearance. Yet apart from jewels and perfumes, we hear nothing of what the lovers in this poem are wearing—perhaps because they’re not.

The most detailed garments in the Bible don’t belong to women. Priestly vestments get a glamorous amount of attention. When Aaron and his sons are first outfitted for the priesthood, they are to wear “a breastpiece, an ephod, a robe, a brocade tunic, a turban, and a sash” (Exod. 28:4). Leviticus adds that the priest should be wearing linen pants underneath the outfit (6:10). The design is very specific: “a gold bell and a pomegranate alternating all around the lower hem of the robe” (Exod. 28:34).

Rich robes and gold accents lent prestige to public figures. Which explains the horror of David’s first wife Michal when the king forgoes the robes of office and dances before the Ark of the Covenant in nothing but a linen ephod, which is an apron. Judging by Michal’s response, perhaps David forgot the pants. Yet David isn’t insensitive to the gravitas of attire. During a conflict with King Saul, David snips a corner from Saul’s robes. He regrets this dishonor later.

Clothing is listed as a basic need—along with water, bread, and housing in the teachings of Ben Sira (Sir. 29:21). No one is to take a poor man’s cloak as a pledge, nor a widow’s clothes. A man who takes a second wife is required to continue to feed, clothe, and provide conjugal rights to the first (Exod. 21:10). Tobit entreats his son to practice mercy, including clothing the naked. Jesus elevates the advice to clothe the naked to a requirement in the final judgment scene of sheep and goats (Matt. 25:43).

Biblical attire is remarkably expressive. Just as a robe signifies honor, putting off one’s robe and donning sackcloth announces mourning or humiliation. Tearing one’s clothes signals outrage, as when the high priest rips his garments at what he perceives is blasphemy during the trial of Jesus. Torn garments are also emblems of despair, as David’s daughter Tamar demonstrates after her brother sexually abuses her. Job tears his cloak and cuts off his hair at the news that all 10 of his children have perished.

Despite the authority and expressive content of clothes, Jesus downplays their importance. As he enters Jerusalem, people honor him by spreading their cloaks on the ground—but we hear nothing about how Jesus himself dressed for this occasion. Jesus humbly removes his outer garments altogether when washing his disciple’s feet. The only other reference to his clothing is when it’s gambled away at the cross. Jesus alludes to those who dress luxuriously in his parables and teachings, but these observations are never complimentary. He does tell us not to worry about what we wear, that the body is more than clothing, and that flowers are better dressed than the greatest among us. Jesus warns that clothing is deceptive, and that wolves come into our midst in sheep’s attire. Disciples shouldn’t even bring a change of clothes when on a mission from God. Which makes me wonder why I have so much stuff in my closet.

Image: Esther before Ahasuerus, Artemisia Gentileschi, via the Metropolitan Museum of Art