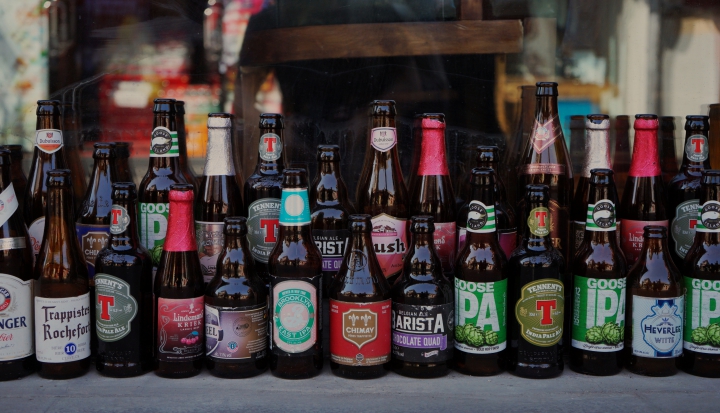 I’m the kind of person who tours breweries to actually learn about the beer. I also like going to daily Mass. So, it’s only fitting that my cooler is (extra) stocked on September 9: International Buy a Priest a Beer Day.

Never heard of it? In good millennial fashion, I stumbled upon an Internet meme touting this obscure holiday while writing a term paper a few years back. Sam Guzman of The Catholic Gentleman blog started IBAPABD in 2013 as an excuse to show priests some appreciation and get to know them better. Since then, he’s received messages from priests and lay people celebrating around the world. Last year, I delivered bottles of Spotted Cow beer to some of my favorite men in black. The celebration got me thinking: Maybe there’s more to this faith and beer connection than one funky holiday. Could my go-to drink have some relevancy with my Catholic faith?

Over the next few months, I’ll explore topics like community-building at breweries, beer-brewing monks and practicing moderation in a series of essays for U.S. Catholic. For now, let’s start with a few beer and faith basics.

People were throwing back cold ones long before Christianity began. Dr. Patrick McGovern, dubbed “The Beer Archaeologist” by Smithsonian Magazine, uncovered a barley beer from the Zagros Mountains in Iran dating back to 3400 B.C.E. It is believed to be the oldest of its kind. Even back then, folks recognized something holy was brewing. People in the ancient Mesopotamian region would sing a brewing recipe to Ninkasi, the goddess of beer, who legend says raised up beer to a divine-like status. For years people drank beer as if their lives depended on it—literally. Water filtration had not been solidified yet. The beer brewing process removed harmful particles from the drink.

I wonder if the scripture authors and characters ever had beer on the brain. Wine is the alcoholic drink with more recognition in the Bible. The psalmists rejoice over the gifts of God the creator, including “wine to gladden the human heart” (Psalm 104). In Proverbs, King Lemuel’s mother recognizes that leaders must be careful about how much wine they consume—but says those in misery can drink to forget their troubles (31:6–7). The first miracle of Jesus himself was turning water into wine at the wedding of Cana. Jesus consecrates wine, the “fruit of the vine,” into his very blood at the Last Supper. Along with bread, wine serves as one of Catholicism’s most sacred elements.

While wine seems to be the biblical drink of choice, consider how often we come across the main ingredients of beer in the Bible: water, grain and yeast. Water is the basis of beer, comprising 90–95 percent of the drink. It is also one of the earliest elements God created. Water is a symbol of sustenance and blessing from God. Jesus speaks of “life-giving water” to the Samaritan woman in John 4, pointing to its eschatological importance. We also see its power in stories like the parting of the Red Sea in Exodus 14, when raging waters destroy the Egyptian forces. Similarly, beer is a drink that can raise the liveliness of a crowd—and do great damage.

Grains like wheat and barley grew in abundance along the Mediterranean region. While the Israelites suffered in the wilderness, they were reminded of the land promised by God, “a land of brooks of water, of fountains and springs, flowing forth in valleys and hills; a land of wheat and barley” (Deuteronomy 8:7). One of Jesus’s most renowned parables is the parable of the weeds among the wheat from Matthew 13. Wheat symbolized belief. Further, there is even mention of the yeast ingredient in stories about Passover customs of leavened and unleavened bread.

So is beer ever referenced explicitly in scripture? It depends what you make of the Hebrew word shekar, translated often to mean “strong drink.” Some argue references to “strong drink” like in Isaiah 5:11 or Numbers 6:3 are about beer. Others say it is another form of liquor. In either case, it’s clear the ingredients that make up beer hold a notable place throughout the biblical narrative.

Additionally, saints like Arnold of Metz and Brigid of Ireland point to the place of beer in the Catholic tradition. Arnold, a seventh century bishop and beer brewer himself, is famous for proclaiming, “From man’s sweat and God’s love, beer came into the world.” He was later dubbed one of many patron saints of brewers.

A few beer miracles are credited to St. Arnold. The tradition is a group of townspeople stopped a local tavern on their way to Arnold’s burial. Tragically, the tap room was all tapped out. Just one mug remained full. Miraculously, after a quick prayer to St. Arnold, that mug remained full all evening as the clan drank away.

St. Brigid, a patron saint of Ireland, had a strong fondness for beer as well. A nun and poet, St. Brigid once wrote, “I should like a great lake of beer for the King of Kings. I should like the angels of Heaven to be drinking it through time eternal.” Legend has it that one Easter season, St. Brigid kept the beer flowing at 18 parishes for weeks—all with just a single barrel.

St. Arnold and St. Brigid, pray for us!

This is the first in a series of web essays on faith and beer by Jessie Bazan. The second is on beer and community, the third is a profile of the brewery at Spencer Abbey, run by Trappist monks, and the fourth is a reflection on the biblical mandate to drink responsibly.

Photo by JuniperPhoton on Unsplash