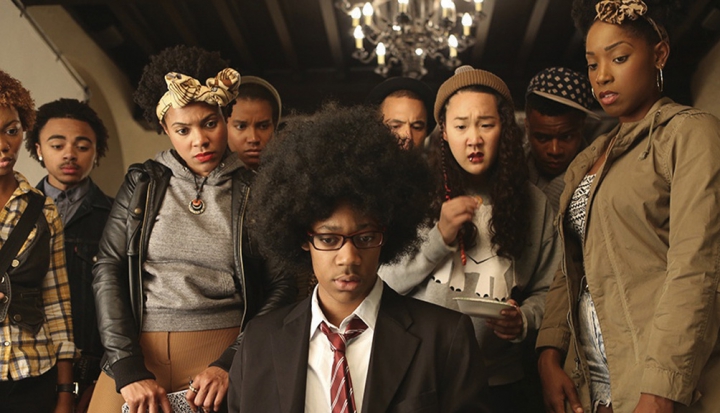 Justin Simien’s Dear White People hammers home the message that everyone is always more complicated than the color of their skin.

Since the shooting of Michael Brown in Ferguson, Missouri last August, race has been back on the American screen, at least the small one. Events in Ferguson have provided TV news with images that seem to recapitulate the past half-century of racial struggle—from police violence to nonviolent sit-ins to outraged burning and looting.

But at the same time, we all know that Ferguson is not Birmingham 1963 or Detroit 1967 or even Los Angeles 1992. The world has changed. When trouble erupted last summer, our black president sent his black attorney general to investigate. On the other hand, where it really counts the most, very little has changed. Those African American men who stay out of jail and survive the hazards of the streets will still be unemployed at a rate double that of their white counterparts.

Dear White People (Lionsgate, 2014), the first feature from writer-director Justin Simien, is set in the uncomfortable gap between the America of Eric Holder and the America of Michael Brown. The film’s main characters are young black men and women who have benefited enormously from the changes of the past half-century but still find themselves branded by race.

They are all students at a fictional Ivy League school called Winchester University. At least one, Troy Fairbanks (Brandon Bell), is a second-generation Ivy Leaguer, but another, Colandrea Conners (Teyonah Parris), is fresh from the South Side of Chicago. One is a dark-skinned young man with an enormous afro (Lionel Higgins, played by Tyler James Williams) who also happens to be gay. Another, Samantha White (Tessa Thompson), is an outspoken black militant, but one with a white father and Taylor Swift on her iPod.

The movie’s title is also the name of White’s campus radio show, which purports to tell white students what they need to hear from black classmates. She punctuates the movie with a Greek chorus of pithy one-liners: “Dear white people, dating a black person to piss off your parents is a form of racism.” “Dear white people, the number of black friends required to not seem racist has officially been raised to two.” “Dear white people, please stop touching my hair. Does this look like a petting zoo?”

Writing like that led the New York Times film critic to call the film “smart and fearless.” And I had to agree, especially after the scene in which Samantha and her teaching assistant boyfriend argue postmodern critical theory while making love.

However, Dear White People is much stronger on witty repartee and intellectual combat than it is on plot. The most important conflicts are within the characters who struggle being a “black face in a white place.” But a more dramatic power struggle does evolve between Samantha and the all-white student humor magazine, which happens to be edited by the school president’s son. This gives rise to the climactic events surrounding the magazine’s ghetto-themed blackface Halloween party.

Lest anyone in the audience mistake this collegiate travesty for poetic license, Simien closes his movie with news clips of several very similar real-life events, beginning with one at Dartmouth College.

Simien also gets a lot of other things right about the Ivy League world. All the students, of whatever race, are supremely smart and ambitious. The humor magazine is a sort of farm team for Saturday Night Live. The student newspaper has an advisor at the New York Times, and campus politics routinely make national news. The only false note is an extraneous subplot about bad publicity and the university’s financial crisis. The real Ivy League schools have endowments that could withstand a nuclear war.

Many reviews of Dear White People have compared it to works by Spike Lee. It’s set on a college campus, like School Daze. Its climax involves a fence-sitting character who ends up taking decisive action, kind of like Mookie in Do the Right Thing.In fact, you could say that Dear White People is the movie that a young Lee would have made if he had gone to a nearly all-white college in Los Angeles instead of to Atlanta’s historically black Morehouse, and if he were, like Simien, openly gay.

But even as I make it, I know that comparison only serves to prove one of the main points of Simien’s film: People are always more complicated than the duality of black and white. Simien’s characters show us there isn’t one “black” cultural or political stance or personal style. His black people come in all dispositions and orientations.

Still, despite glaring differences of style, geography, and sexuality, Simien and Lee always end up in the same paragraph because they are black filmmakers. It would make just as much sense to compare Simien to Tyler Perry, the black director of inspirational comedies, or to Gus Van Sant, who also happens to be gay.

Compared to days gone by, the campus issues at stake in Dear White People seem relatively minor. As the movie opens, the university is moving to a random placement policy for student housing, which will break up the traditionally “black” residence hall. On the face of it, that seems very color-blind and post-racial, but over the next hour and a half we come to understand why Winchester’s African American students feel the need for a safe haven.

On Simien’s fictional campus, as in Obama’s America, even successful and affluent African Americans still bear the burden of explaining themselves to white people and defending themselves against stereotypes when all they really want is the chance to be their own complex, multifaceted human selves.