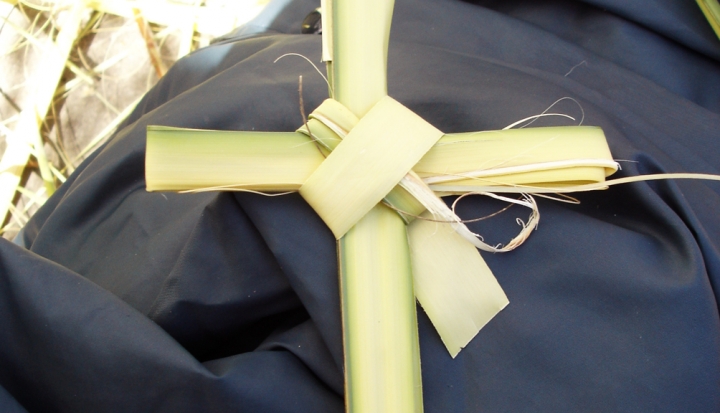 The editors of U.S. Catholic interview Father Donald Senior, C.P., professor of New Testament Studies and president emeritus of Catholic Theological Union in Chicago. He is the author of the book Why the Cross? (Abingdon).

This year, on Palm Sunday 2014, we will be listening to Matthew’s account of the passion, and on Good Friday we’ll again be hearing the passion according to the Gospel of John. What are the most important differences in the depiction of the events between Matthew and John? What should we be listening for?

One spot where the differences between the two accounts are stark is at the moment of Jesus’ death. Mark is the major source of Matthew’s account, and both of them have Jesus, at the moment of his death, reciting the first verse of Psalm 22, “My God, my God, why have you forsaken me?” But Matthew makes a couple of subtle but significant changes in the Greek text, to indicate that Jesus actually dies with that prayer on his lips. He says he “cried out again,” and he alters the way Mark has expressed it.

So Jesus dies with this great lament song of the Old Testament on his lips. Like other psalms of lament, Psalm 22 has a two‑fold structure. The first part is pure lament and speaks of the torment of the psalmist who’s praying. It’s almost like a nightmare imagery. He cries out. People are surrounding him and taunting him.

In the second half of the Psalm, suddenly the mood shifts. It changes to exultation. There’s no explanation. It’s almost like a catharsis, and there is praise of God’s trustworthiness. It says that even those that go down into Sheol will praise him, and all the ends of the earth—the Gentiles—will praise him for his faithfulness.

Matthew, leading into the scene of the death of Jesus, adds another direct quote from Psalm 22:8 in the words of mockery by the chief priests: “He trusts in God, let God deliver him now, if he wants to” (27:43). That’s not found in Mark’s gospel.

What Matthew has done in this portrayal is to present Jesus in some very Jewish tones. He’s an obedient, faithful seeker of God’s will in his life, obedient to the Torah. That is put into question, if you like, by the onslaught of death, even to the point where he cries out in lament, “My God, my God, why have you forsaken me?”

Having Jesus die with that verse from Psalm 22 on his lips basically leaves Jesus to die in utter despair. Now aren’t some scripture scholars saying that when Jesus is saying those words, it would imply that he prayed the whole Psalm 22, which, as you said, takes this whole other turn in the second half?

Yes, that’s being debated. And I’d say most scholars believe that Mark and Matthew are invoking the whole Psalm here.

In recounting Jesus’ death, Mark‘s gospel is very stark. He says, literally, “Jesus let out a great scream, and he expired.” Matthew changes that. As I mentioned earlier, he says, “He cried out again.” He changes the verb to one that’s used in the Psalms repeatedly. And when he says, “He cried out again,” he’s referring back to the first cry, “My God, my God, why have you forsaken me?” Then, Matthew says, Jesus “handed over his spirit.” Most interpreters think that Matthew is evoking a very Jewish concept of the obedient death. You hand back to God the life breath.

So what Matthew is doing here with these subtle changes is that he is presenting Jesus as dying in anguish but still trusting of God.

That’s also reflected in what happens next in a whole series of events that’s only in Matthew’s account: Suddenly the veil in the temple tears in two, a series of earthquakes, the rocks split, the tombs open, and the holy ones come out. He seems to be alluding to Ezekiel 37, the dry bones text. Then you have the centurion and his companions who claim, “Truly this was the son of God.”

Matthew actually seems to get a bit carried away and into trouble here, because he already has resurrection events breaking in on Good Friday, as “many bodies of the saints who had fallen asleep were raised.” So he quickly has to add that they only came out of their tombs and went into the holy city “after his resurrection.” What he wants to say here, I think, is that immediately the trust of Jesus in God is vindicated, even in the midst and through the mystery of death.

So if that’s Matthew’s account of Jesus’ death, how does John portray it?

In John, it’s a very different scene. There is no cry of abandonment. John’s whole passion narrative—although it’s the place where he’s closest to the other three gospels, especially from the arrest on—is very triumphant. John is barely able to suppress the sense of the triumph over death. Jesus dies in John’s gospel with the words “It is completed.” Throughout his gospel, John uses that verb “to complete, to finish” in statements summarizing Jesus’ mission.

Immediately before that, John has the scene of the crucified Jesus with his mother and the beloved disciple, which you might interpret as sort of the beginning of a new community that encompasses Jews and Gentiles. Then there’s the lance thrust and the blood and water coming out, which are highly symbolic in John’s gospel. John also is the only one who writes of the breaking of the legs of the two who were crucified with Jesus, while Jesus’ legs are not broken, which echoes several biblical descriptions of the paschal lamb.

John’s gospel has already prepared the ground for the passion. Now it is just being lifted up. The death is portrayed as an exaltation; it’s the way of his return, of his circuit back to the father from whom he had come.

So the overall mood of Matthew and John, particularly in the scene of Jesus’ death, is dramatically different. Each of them choose a different tonality or interpretation of the death of Jesus that fits into the overall cast of their gospels as a whole.

Can you tell us a little more about what that “tonality” is in each of the two gospels?

Most people would see Matthew as a Jewish‑Christian gospel, written for a Christian community that still very much identified itself as thoroughly Jewish. By following Jesus, the messiah, and his teachings, they actually considered themselves to be more Jewish than the rest of the Jews.

Matthew is trying to reassure his Jewish‑Christian community that they are in profound continuity with their heritage and, in fact, are coming to a moment where the whole history is turning. The death and resurrection become the pivot for this: The new age is breaking in, the end time is happening, at the moment of the death and resurrection of Jesus. New possibilities are there, and Israel’s vocation to be a light to the nations receives its fulfillment.

The final scene of the gospel is in continuity with this whole movement of the gospel. The tone of Matthew’s death and resurrection is this notion of fidelity, of obedience, this emphasis on trust.

John’s overall conception of the role of Jesus—and the identity of Jesus—has a certain simplicity to it. It captured the imagination of Christianity, once it came into play, and it sort of consumed Christology up until the present day by playing both into Jewish and Greco‑Roman concepts.

It conceives of God as intent to speak. This is a very biblical notion, like the creation story, God speaks and things happen, things come into being. In John’s conception, God speaks ultimately, decisively, and the Word becomes flesh. This Word is a word of redeeming love for the world, not condemnation.

That word becomes embodied in the mission of Jesus’ teaching and healing, compassion, and so on. It’s expressed in these signs that he does, it’s expressed in the imagery of his discourses, bread, light, life, way, truth, and so on. That Word sweeps into human history, becomes truly flesh. But that Word ultimately goes back to God.

For John, it’s like a circle: God speaks, the Word descends, becomes flesh and proclaims God’s love to the world, and then is exalted, paradoxically, through the cross.

The passion narrative, in John’s gospel, is of a piece with the whole of the gospel, in that the great paradox is the crucifixion, which was regarded in the Greco‑Roman world as the worst possible form of human degradation. The paradox for John, as it was for Paul and others, is that Jesus, because of who he was on this cross and why, transforms what was the most hideous example of human death, into a primal symbol of human life, human love.

John’s passion narrative on one level, is a narrative of brutality and more physical than the other gospels. At his arrest, Jesus is struck on the face. He’s interrogated and tortured. It’s only in John that you have blood flow at the moment of the spear thrust. John doesn’t mask the death of Jesus.

On the other hand, his theology is so triumphant, so powerful and beautiful about the triumph over death, that he can barely get it out. Jesus goes to his death with majesty. When the people come to arrest Jesus in the garden, he asks them who they are looking for. When they answer, “Jesus of Nazareth,” he says, “I am,” in a formula using the divine name. Upon this divine revelation, his captors fall to the ground. In John, the disciples don’t flee; instead, Jesus instructs his captors, “Let these go.” He’s depicted as being in charge, really, even though he’s being arrested, is tortured, and then brutally executed.

All the way through, John follows the passion story, but he is suffusing it with a sense of foregone victory over death.

Almost as if Jesus were directing his own movie.

Yes, that’s a good way of putting it. Again, that’s consistent with the rest of the Gospel of John.

All the passion stories are different from each other in the same way the gospels are different. The German theologian Martin Kähler is often quoted for saying that the Gospel of Mark was a “passion narrative with a long introduction.” While that’s not really true, for all four gospel writers there’s certainly a clear connection and continuity of the meaning they find in Jesus’ death and resurrection with their overall messages and portrayals of Jesus throughout their gospels.