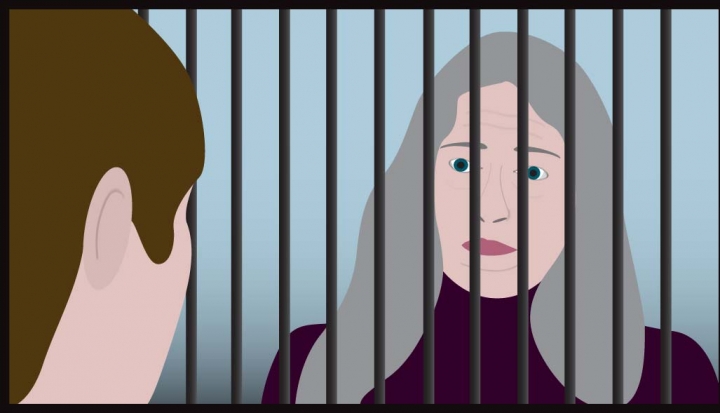 Luisa Borrego didn’t know much about the prison system before her son, at only 14 years old, was arrested after being in the back seat of a car during a drive-by shooting in Los Angeles. He was convicted of murder and now, at age 20, is serving a sentence of 50 years to life.

Borrego stopped working after the arrest so that she could support her only child during the trial and sentencing. She struggled to maintain their relationship while he was transferred, first from juvenile hall to a juvenile prison, then to an adult prison when he turned 18. She now drives two and a half hours to the prison for monthly visits, each of which lasts at most three to four hours.

“It changed my life,” Borrego says. Being out of work created a financial burden and the stress of the situation led Borrego into severe depression. The more she watched her son struggle in prison, the more she came to believe the system had no concern for helping to rehabilitate offenders. And as a parent, she says, the justice system had little concern for her needs.

“People don’t realize that on our side (as parents) it is not about just the pain that we go through seeing our sons and daughters incarcerated, but also the injustice of the system,” says Borrego. “Sometimes I feel like I am getting treated like a criminal.”

Borrego is not alone in her struggle. In California, where juveniles often receive harsh sentences for crimes committed before reaching adulthood, parents of convicted minors have been fighting for their rights in the justice system. “The people that really are deeply affected in all of this are the families,” says Jesuit Father Michael Kennedy, founder of the Jesuit Restorative Justice Initiative, which works with many juvenile offenders and their families in a region of southern California plagued by gang violence.

As part of his work in restorative justice—which focuses on healing rather than punitive responses to crime—Kennedy began a support group for parents of incarcerated teens. Borrego first met Kennedy while her son was serving time in juvenile hall and soon discovered that her situation was far from unique. “Unfortunately with stories like mine, there are thousands,” she says. “And for you to understand what a mother goes through, you have to live the experience.”

Borrego was comforted by the parent support group. There she met other grieving mothers who were willing to help her through the same challenges they had faced. They went with her to court proceedings, gave her rides, and helped her understand the rights she has as a parent. And now that Borrego has several years of experience with the system, she is reaching out to help other parents in her position.

Borrego still faces challenges, but she has received treatment for her depression and is now back to working part-time. “I am getting there,” she says. “I am trying to take my life back, although it is not going to be the same and I know it. But I am trying my hardest.”

This article is a web-only feature that accompanies “Truth and consequences: When crime victims and offenders meet,” which appeared in the March 2013 issue of U.S. Catholic (Vol. 78, No. 3, pages 12-17).