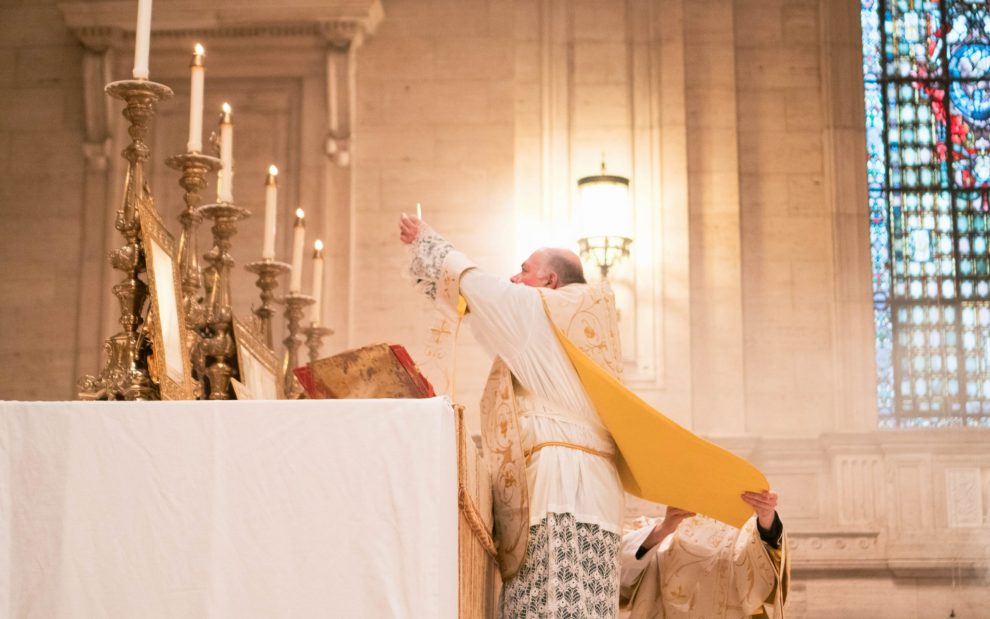 The first language of Christian liturgy was Aramaic, the common language of the first Christians, who were Palestinian Jews. While Hebrew was the language of scripture and formal worship, Christian worship occurred in the home where Aramaic was spoken. The words Abba and maranatha are Aramaic.

Christianity quickly spread from Palestine to the rest of the world, and the Eucharist came to be celebrated in many languages, including Syriac, Coptic, and Armenian. In most of the Mediterranean world, the common language was Greek, which became the language of liturgy in that region and remained so until the early third century.

Eucharist itself is a Greek word, meaning thanksgiving. The phrase Kyrie eleison and the words liturgy, baptism, evangelize, martyr, and catechumen, among other familiar church words, are also Greek in origin.

Exactly how this change in the liturgy came about is uncertain. In the early church the liturgy was led extemporaneously by the bishop, according to a pattern. There were written examples of Eucharistic Prayers, but they were models, not prescribed prayers. The last such document in Greek was written around the year 215. By the sixth century, the Roman Canon (which is still in use, also called Eucharistic Prayer I) appears, completely in Latin and prescribed for use exactly as written.

What happened during those centuries? It seems that a core of the Roman Canon was developed and used first, probably even in liturgies that were partly in Greek and partly in Latin, until the final Latin version evolved. Because Christians had not used Latin for worship prior to this, words had to be adapted or imported (often from Greek) to express Christian ideas, beginning the development of an ecclesiastical form of Latin. There is also evidence that the Roman Canon was influenced by prayers from the Eastern churches.

Even though Latin evolved into various modern languages, Latin remained the sole language of the Roman Rite until the Second Vatican Council returned to the original instinct of Christianity that people should worship in a language they understand.