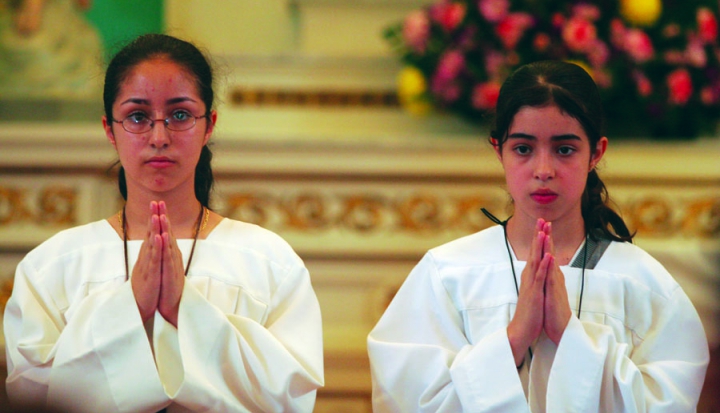 Cardinal Raymond Burke, quoted in a Religious News Service story today by David Gibson, appears to be blaming altar girls for the drop in priestly vocations.

“Young boys don’t want to do things with girls. It’s just natural,” Burke was quoted as saying. “It requires a certain manly discipline to serve as an altar boy in service at the side of (a) priest, and most priests have their first deep experiences of the liturgy as altar boys.”

“If we are not training young men as altar boys, giving them an experience of serving God in the liturgy, we should not be surprised that vocations have fallen dramatically,” said Burke, a former archbishop of St. Louis who was recently removed as head of the Vatican’s top court by Pope Francis. Burke gained worldwide fame for criticizing the pope’s leadership after the recent family synod, saying he was speaking for many who felt that the church was “like a ship without a rudder.”

Now let’s consider Pope Francis’ choice for the new Archbishop of Chicago, Blase Cupich, who has made it abundantly clear since his arrival in the Windy City that he expects to see female altar servers (and more than one) at Masses he celebrates in Chicago, including at his installation mass. Here’s a blog post by Amanda Thompson, an archdiocesan employee who was asked to serve at the Cupich installation. Whether or not Cupich went “calmly ballistic” at the initial installation plans, as claimed by Chicago Sun Times columnist Michael Sneed, the installation’s traditional all-seminarian server squad suddenly included four women. Cupich’s Masses out in the parishes have followed suit.

U.S. Catholic author Mary Kathleen Cahill in our December 2014 issue argued against the still sporadic but growing trend to ban altar girls. Cahill, 19, a sophomore at Boston College, writes, “Even if … eliminating female altar servers really would bring in more boys who eventually go on to the priesthood, it raises another question: Are those really the type of priests we want leading a parish? The best pastor is not likely the one who has had females cleared out of his path and been taught that if he doesn’t want to deal with women in his vocation and work, he doesn’t have to.”

Image: Photo courtesy of the Claretians and Jon Lowenstein