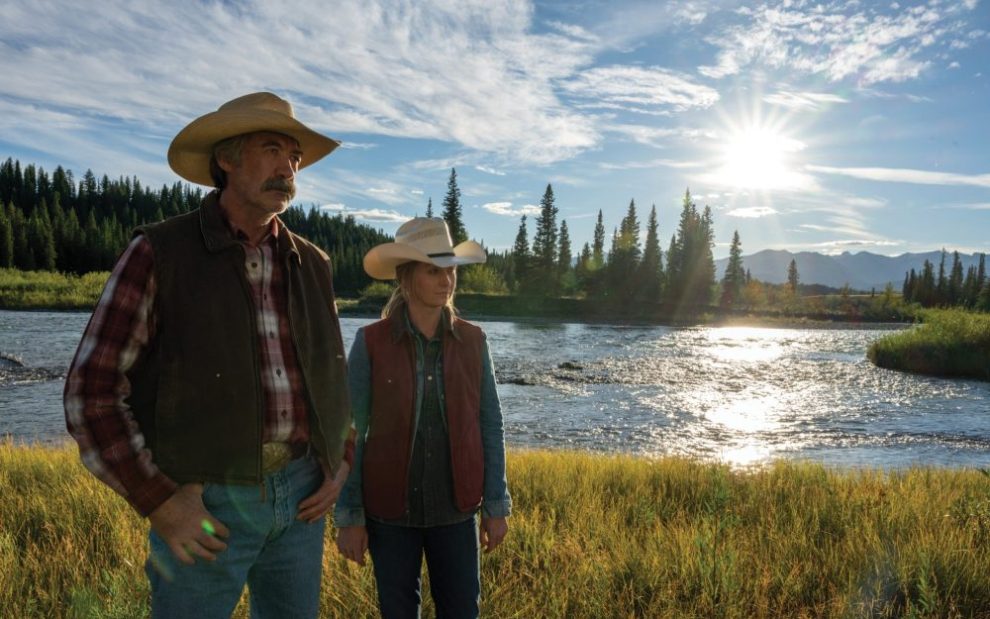 Heartland is a family show without corruption or treachery, a cowboy show that focuses on women, and a western show set not in the United States but in Alberta, Canada.

It’s also Canada’s longest-running one-hour drama series and was renewed for its 16th season. It is available in the United States via Netflix and UPtv. It’s compellingly addictive television—comforting and homey, simple and true, peopled with handsome men in cowboy hats and competent women who can handle horses, cattle, and business.

Adapted from a series of 26 young adult novels by Lauren Brooke, Heartland tells the story of the Bartlett-Fleming family raising horses and cattle on the same land for generations. Its charm is the churning activity of great-grandpa, grandpa, parents, and children, all housed in one log ranch house.

Rodeo legend Jack Bartlett (Shaun Johnston) was raised on the 600-acre Heartland cattle ranch, which is now a haven for troubled horses. After his daughter, Marion (Lisa Langlois), is killed in the first episode while trying to rescue a horse, he raises his granddaughters, Amy (Amber Marshall), who has a special talent for helping recover abused and traumatized horses, and Lou (Michelle Morgan), who runs a dude ranch on Heartland.

The focus is teenage life on an isolated ranch, with some small-town drama tossed in. We don’t visit high school with the characters (thereby attracting an adult audience for the show), but we do sit around the kitchen table, solving the kinds of problems that seem especially urgent to 15- to 20-year-olds over homey dinners and family talks.

In the episodes spanning the last decade and a half, we see the characters age and develop, moving in and out of relationships, jobs, new homes, parenthood, and even tragedies.

Ty (Graham Wardle), an adolescent in foster care and a novice to horses when the show opens, becomes a ranch hand and eventually enters veterinary school and marriage with Amy. Caleb (Kerry James) is a young rodeo cowboy housed in a decrepit trailer, driving a truck with bad tires and struggling to recover from bronc-riding injuries and a young, ill-fated marriage. Mallory (Jessica Amlee), a teenage neighbor who virtually lives at the ranch, functions as a Greek chorus of sorts, chirping out annoying truths that other characters tiptoe around. We root for little Jake (Jake Church), a boy cowboy who has loved Mallory since middle school, though it takes him many seasons to grow up and earn her romantic attention.

Then there are the horses. Cutting horses, roping horses, barrel-racing horses, dressage horses, race horses, trick horses, ponies, and wild mustangs—the family rides them, rehabilitates them, and raises them. Many of the show’s wiser lessons (and there are many, since this is a bit like The Waltons out west) are delivered through and about what the horses teach the humans.

Most of the actors do at least some of their own riding, except for the dangerous bits. The story’s respect for and love of horses and cattle-raising life is palpable. Photography is lush and lingers on the texture of a horse’s coat, the squeak of stirrups, the heft of a saddle. The most frequently occurring lines are “Whoa, boy,” “Good boy,” and “Git along, cow.” Watch a few seasons and you might start to think you’ve learned enough to drive cattle at least a few feet, if pressed.

Heartland is tween-friendly—a bit of romance but no sexy bedroom scenes, just kisses in the kitchen and fully clothed wrestling in the barn. Grandpa Jack dates and eventually gets married—seeing him drink coffee out of a mug marked “World’s Best Lover,” a female rancher quips, “I thought that was our little secret.” His homespun wisdom and earthy insight hold the show together. Amy’s father, Tim Fleming (Chris Potter), is perhaps the most complex character on the show, a nuanced mix of cowboy swagger and clueless schemer that the veteran actor plays with immense charm and humor. Over the seasons, I went from hating him to rejoicing whenever he shows up on-screen. When they’re in scenes together, Grandpa Jack and Tim are a hoot, squabbling and bickering while secretly, of course, respecting and caring about each other.

The highlight of most episodes is watching Amy work patiently and kindly with horses. Amy is pleasant, reliable, and not particularly complicated, a standard-bearer for a good, earnest young woman. Her sister, Lou, is more fiery, making mistakes, demonstrating endearing weaknesses, and developing into someone we genuinely like.

The house is a character in itself: a crackling fireplace, cozy quilts, a big farmhouse table, and walls of exposed log and mortar. This show is addictive comfort television. The warm, intimate kitchen and handmade hearth of local stone have a lot to do with that, coupled with the stunning Alberta scenery. A scene of even a simple trail ride is splendid, with snow-clad trees, far-off mountains, and crystalline lakes.

For all its family-friendly wholesomeness, Heartland is not sickly sweet and does not sidestep the realities of life. There is painkiller addiction, drinking, a few sinister characters, and people letting one another down in predictable ways—all dealt with in conversations while mucking out the barn or putting food on the table.

It’s a lovely place to visit.