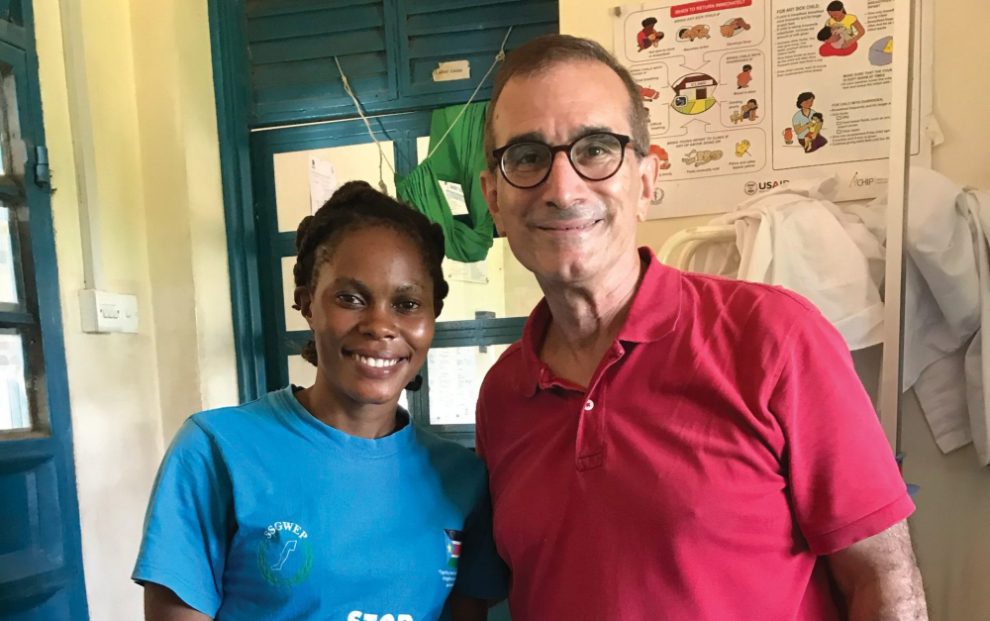 Less than a year after retiring, Joseph Sclafani went right back to work. He knew that his 30 years of obstetric experience could make a major impact in a country with one of the highest infant mortality rates in the world. That’s how he ended up in South Sudan.

Sclafani joined the Catholic Medical Mission Board (CMMB) as a volunteer OB-GYN and educator in late 2019. He puts his knowledge and experience to good use by speaking with incoming volunteers, providing virtual training sessions, and traveling to South Sudan to provide clinical education and mentor staff. Through each of these efforts, he is helping CMMB improve maternal and child health for those living on the margins.

On his first trip to South Sudan, Sclafani was touched by the need and desire for clinical education in the country. “They’re so hungry for education,” he says. “They feel totally ignored by the world. . . . We get so much medical information, but they get nothing.”

Sclafani partnered with CMMB to do something about that injustice.

South Sudan centers on improving the quality of care in rural health facilities. A big problem the organization faces is a lack of birth facilities and skilled health professionals.

After coming out of retirement, Sclafani wrote in a blog post, “My stethoscope, hands, and heart are once again my best friends at the bedside and in the operating room, reducing the complexities of advanced technology. I have developed new and enduring friendships, a new sense of a global community, and an abundance of gratitude for the opportunity to give back to those most in need.”

Those close to Sclafani weren’t too surprised that he couldn’t stay retired for long. After all, his career had included spending four years in Malawi as the director of global women’s health for Baylor College of Medicine. He helped establish the first obstetrics and gynecology residency program in Malawi, which more than doubled the number of OB-GYN specialists in the country. Leaving that position was difficult, but he realized that the effects of his work would continue to ripple out as the young doctors he trained then trained others.

That experience opened his eyes to the health needs of developing countries and showed him how he could be part of filling those needs. Sclafani talked about this at a recent CMMB symposium about Catholic doctors on the front lines: “Education can serve as a very effective intervention to improve the health of women and children,” he said. Learning about the power of clinical education in Malawi partially prompted his decision to work in South Sudan.

Sclafani’s call to abandon his retirement and jump into international service is deeply rooted in his Catholic faith. He was moved by the writings of Jesuit Father Pedro Arrupe and the life of St. Óscar Romero, who promoted a preferential option for the poor. According to Sclafani, “This teaching posits that there are structural forces in many societies . . . that make the poor poorer and the rich richer. And it suggests that all of us have a moral obligation to confront these iniquities and advocate for justice for the poor.”

Once he learned about the health disparities in South Sudan, he felt like God was calling him to serve. But instead of jumping in right away, he returned to the three steps that guide him through discernment: observe, reflect, and act.

Sclafani says he started by observing South Sudan’s current health care needs: “The public health system cannot deal with the collective burdens of HIV, tuberculosis, malnutrition, malaria, and a host of other diseases.”

As he reflected on that inherent injustice, he also thought back to his work in Malawi. “[The Malawian] doctors-in-training were just as intelligent and hardworking as the residents I taught in the United States,” he says, “They just need extra help, extra money, extra support.”

He realized that working with CMMB would be another opportunity to live out his commitment to provide a preferential option for the poor. He could give South Sudanese medical providers access to the education they so desperately needed.

In early 2020, Sclafani was set to travel to South Sudan on behalf of CMMB, but the COVID-19 pandemic changed his plans. With the borders closed to international travel, the CMMB volunteer team and Sclafani realized that there was an enormous need to help their overseas staff prepare for the pandemic. The medical teams the CMMB supported were already asking for best practices in treating and preventing the virus. These teams also needed to redesign some of their medical facilities to minimize the risk of COVID-19 infection.

Sclafani hosted a live educational webinar on maternal health and the effects of COVID-19 for health care providers. This was presented to CMMB staff in Haiti, Kenya, Peru, South Sudan, and Zambia. The virtual training session helped prepare, educate, and empower health care workers with the knowledge they needed to adapt operations amid the pandemic. Eventually, the webinar was translated into French and made available to other health care workers throughout the Democratic Republic of the Congo, Madagascar, and countries in West Africa.

Sclafani was pleased by the turnout, response, and involvement of the people in the trainings. “We gave them the best information we could give them based on the science,” he says. “It was well received with lots of feedback and questions.”
In 2021, as the COVID-19 pandemic was coming under control, Sclafani began working with CMMB once again. He noticed a lack of continuing education for nurses and midwives and concluded that CMMB had an opportunity to educate and train the health care providers with whom it works.

With the assistance of his CMMB colleagues, Sclafani proposed a capacity-building program with three components. The first was a two-day training program to teach the fundamentals of normal labor and birth. Next, he started an ultrasound training program using two donated state-of-the-art ultrasound machines. Finally, through the collaboration of CMMB and ICAP Global Health (an international, nongovernmental organization at Columbia University), he established a long-distance learning program for South Sudanese health care providers to identify women with high-risk pregnancies and decrease delays when patients require transfer to higher levels of care.

After Sclafani explains each of these programs, he nods with satisfaction. “These three programs are examples of an educational preferential option for the poor,” he says.

Sclafani’s work with CMMB is closely connected to his walk with God. “We’re all called to clothe the naked, to be a Good Samaritan to the sick and injured, and to feed the hungry, whether these people are around the block or around the world,” he says.

And while some may think that volunteering in South Sudan during retirement would be depleting or overwhelming, Sclafani sees it differently. “By acting in the service of others, we too are healed. This is the miracle of service,” he says. “The servant acquires new gifts that aid in his own healing, such as the gifts of compassion, empathy, and acceptance, as we accompany those who are on the road to recovery.”

Alyson Rockhold was a medical missionary in Zambia, Tanzania, and Haiti. She unexpectedly returned to the U.S. in 2020 and started a writing ministry during that time of transition. Click here to download her free 7-day devotional about Psalm 46:10 “Be still and know that I am God.” You can learn more about her work at www.alysonrockhold.com.