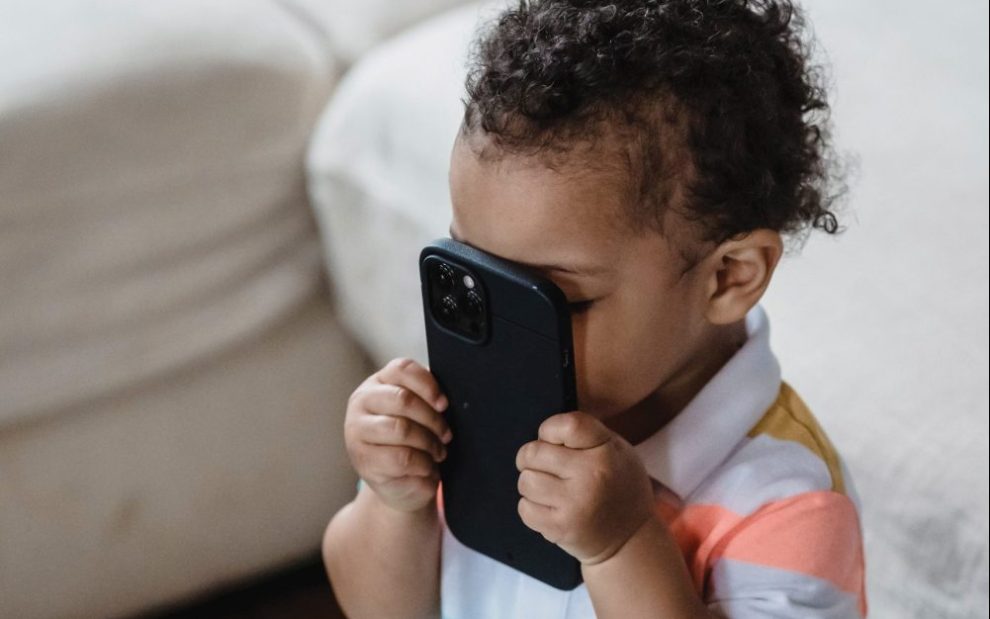 One of the least appealing pastimes that I’ve allowed my toddlers to develop is looking at the camera roll on my phone, an activity that they refer to as “Look at baby pictures!” (All of the pictures on my phone are of them, naturally.) It’s hard to say what bothers me more: the blatant vanity of the delight they experience in staring at their own faces or the unsettling look of a tech-savvy 2-year-old adeptly swiping the screen. Either way, I find the pastime off-putting (and to be clear, I fully understand that I’m the culpable adult in this situation), but I allow it to continue because, well, sometimes I just need a break.

While the guaranteed 10 minutes of quiet occupation are what initially moved me to permit the activity, the true silver lining has turned out to be a tangential discovery: I’ve glimpsed the mystical and spiritual wonderland that is my 3-year-old’s mind.

Let me explain. In the course of looking at photos of herself, Esther—my 3-year-old—has discovered that she can swipe from the far left of the screen to reveal a search bar and that she can type what she calls “mojis” into that search bar. She enjoys doing this almost as much as she relishes looking at photos of herself. As she punches in a long string of smiley faces, tulips, poop plops, shooting stars, baby chicks, and rainbows, she dictates what she tells me are texts. (That is, she speaks out loud in a cadence just like the one she overhears me using when I dictate texts, and, let me tell you, she has it down: “Hi Daddy exclamation point I love you period thanks for everything smiley face smiley face.”)

What I’ve overheard her dictating has both delighted and surprised me.

Look, I know that the “Wow! Stuff kids say!” trope is a bit tired, and I hate to be going down that route, but hear me out. Many of Esther’s “texts” have a particular theme to them: boundless love and connection. For instance, I jotted down this one that I overheard recently: “I love me and you love me and I love you and you love you and love is love and I am love.”

What strikes me about Esther’s texts is not only the purity and sweetness of the messages, but also the fact that they seem to just spring forth from within her. As much as I would like to take credit for having instilled in her these ideas—that she is not only loved but is love itself—as far as I can recall, my husband and I haven’t used this kind of language with her. It’s possible that she picked up the ideas elsewhere, but I’m inclined to say that these are God-given concepts. As an older friend commented when I told her about Esther’s messages, “She sees the universe in a way we don’t. She’s so fresh from the other side.”

I think there’s something to this. My young daughters see and experience the world, themselves, and their relationships differently than I and other adults do. While much of this can be attributed to their mental and physical development, I sense that some of it has to do with their spiritual intuitions as well.

Let me give another example. Franny is my 2-year-old, and, the earnest, rule-abiding child that she is, she folds her hands for prayers the moment we set her in her booster seat at the kitchen table. She sits very still throughout “Bless us, O Lord,” but when we reach the end of our mealtime blessing, she lets loose: She unclasps her hands and opens and shuts them rapidly as she waves them in front of her face in a flurry of enthusiastic movement.

This, of course, is her version of the sign of the cross. I suppose that to her, that’s what we’re all doing—just waving our hands in front of our faces—and I also suppose that her movements could be attributed to not yet fully developed gross motor skills. But when I watch Franny make the sign of the cross, I’m sure that she’s onto something. It’s like she’s creating a ball of joyful, electric energy as she waves her little arms around. To me, that’s such an apt visual for the Trinity: God in relationship; God in all things; God as a life-giving, never-stopping, untiring force of energy and love.

I mean no disrespect to whomever developed the sign of the cross as we know it, but I do think Franny’s movements capture God’s essence a little more accurately—or at least more artistically—than the slow and careful gestures of hand to forehead, chest, shoulder, and shoulder.

I’ve long had the sense that there are so many different ways of knowing God and that the spiritual life takes on as many shapes as there are people engaging in it. Person A connects with the divine by spending time in nature, while Person B takes the path of the intellect, while Person C finds practices like praying the rosary or walking a labyrinth to be spiritually nourishing. When I observe my daughters, however, I get the sense that they don’t just have a different way of knowing—they are on a completely different plane of knowing. For them, spirituality isn’t a distinct aspect of their selves, one that can be described as A, B, or C. It’s just who they are.

I overheard Esther singing her own rendition of “Twinkle, Twinkle, Little Star” the other day, and it went like this: “I am twinkle, you are star; how I wonder what we are?” She reminded me in that moment that while she’s on a different spiritual plane than I am, it’s not an exclusive island. I can go there too. I am star, after all.