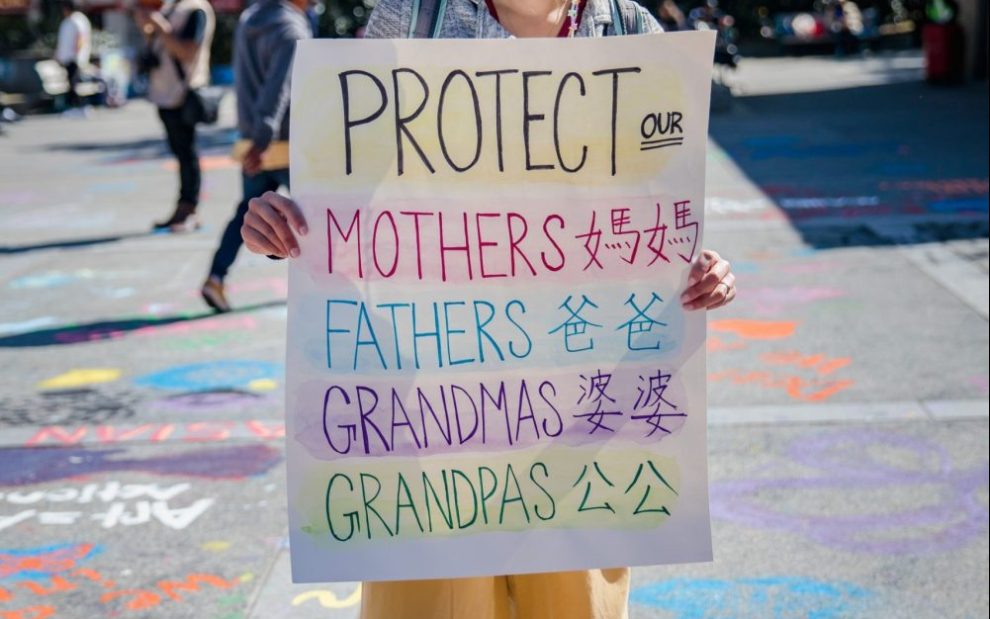 As Christian mystic Howard Thurman noted, the “religion of Jesus” is supposed to be a word of salvation, a way of survival, and a means for creating a liberating community for those who stand with their backs against the wall. As we continue through Lent and approach Holy Week, the Asian American community is again finding their backs against the wall.

March 16, 2022 marked the one-year anniversary of the Atlanta mass killing of six Asian American women. The organization Stop AAPI Hate documented 10,905 hate incidents against Asian American and Pacific Islander (AAPI) persons between March 19, 2020 and December 31, 2021. The Center for the Study of Hate and Extremism reported that incidents of anti-Asian violence increased 331 percent nationwide from 2020 to 2021, with the epicenters being New York, San Francisco, and Los Angeles.

And in the days since Advent, racialized violence against Asian Americans—especially Asian American women and elders—has continued.

In New York, Michelle Goh was killed when pushed in front of an oncoming subway car.

Christina Yuna Lee was fatally stabbed by a stranger as she entered her apartment.

GuiYing Ma was attacked and murdered while sweeping the sidewalk.

Seven unnamed women of Asian descent were attacked by one man in the span of two hours.

An unnamed 67-year-old woman was attacked and struck 125 times by a younger, male stranger. The assailant hurled racial slurs at her before attacking her. Simply because she was Asian.

In Chicago, my home, the reported incidents are less common but still severe: Woom Sing Tse died after being shot 22 times as he was walking to the corner store to get a newspaper.

All these crimes occurred while someone was following a daily routine: commuting to work, going home, cleaning outside, going to the store. These normal daily activities ended with death or violence at the hands of strangers. Let that sink in.

These slayings and assaults represent only some of the hate incidents perpetrated against Asian Americans. As is true within many ethnic communities, while some of these crimes are reported, many more go unreported because of language barriers and mistrust of police.

So, to reference Thurman: What do the teachings and life of Jesus have to say to those who stand, at a moment in human history, with their backs against the wall? Or, in this historic moment, how can non-Asian Americans embody Christ in the midst of this kind of racialized violence?

One phrase comes to mind: solidarity with the sinned-against. Through Jesus’ struggles in Holy Week, and the paschal mystery, God demonstrated God’s ultimate solidarity with us in all our human frailty. God accepted all the pain and bitterness of human existence as God’s own and then transformed it into something new. This solidarity was integral to Jesus’ “way,” and we as his disciples are called to a similar mode of life.

In the 1987 encyclical Sollicitudo Rei Socialis (On Social Concerns), St. Pope John Paul II points out that solidarity “is not a feeling of vague compassion or shallow distress at the misfortunes of so many people, both near and far. On the contrary, it is a firm and persevering determination to commit oneself to the common good; that is to say to the good of all and of each individual, because we are all really responsible for all. . . . The exercise of solidarity within each society is valid when its members recognize one another as persons.”

Solidarity was integral to Jesus’ “way,” and we as his disciples are called to a similar mode of life.

Theologian Raymond Fung pointed out that the term sinned-against refers to those who are the victims of sin. Obviously, each of us is an amalgamation of experiences and thus both sinners and sinned-against. However, specific moments in history require a more careful description that focuses on the victims of sin and the causes of their affliction. This is what is offered by the phrase “sinned-against.”

With this understanding of solidarity with the sinned-against in mind, the life of Jesus of Nazareth provides a template for this practice: awareness, listening, and action.

First, Jesus was aware of himself, other people, and the ambiguities of the overlapping contexts in which he lived. He was a Jewish man living under Roman oppression. He had few rights that a Roman was bound to respect and knew what it was like to live under the constant threat of violence. He probably had friends, family, or neighbors who were the victims of Roman violence. This kind of situation can produce either great resentment and anger in one’s heart or fiery compassion for the suffering of others. For Jesus, it seems to have done the latter.

He lived in each moment, fully aware of the woundedness of others and how their suffering affected them and might affect him. When the bleeding woman touched him, he was aware of her long suffering and the social stigma of her touch. When the Gerasene demoniac needed healing, he was aware of both the depths of the man’s pain and the danger of getting involved. When the Roman centurion pleaded for help, he was aware of the politics involved and the immense challenge of freely choosing to show love for one’s enemy. When he encountered the woman whom the scribes and Pharisees had accused of committing adultery, he was aware of the danger and precariousness of both her and his situation.

Third, Jesus acted. He didn’t simply hold the suffering of others in his body, mind, and spirit. He was paralyzed neither by his awareness of others’ deep suffering nor by his own emotional reactions to their stories and experiences. He showed that contemplation is only part of a larger whole that includes action. So, Jesus acted to alleviate that which caused others’ oppression and suffering. In John’s gospel he used tactics of nonviolent redirection to save the life of the woman accused of adultery. In the synoptics he used his healing know-how to free the demoniacs from spiritual bondage, the bleeding woman from her infirmity, and the paralytics and lepers from their ailments. In all four gospels he brought hope to grieving parents and friends through raising the dead.

At this time of racialized violence against so many, the responsibility to solidarity becomes especially pressing for all who claim to be disciples.

Even when he was betrayed and intuited his forthcoming arrest, torture, and execution, Jesus reinterpreted a sacred Jewish ritual so his disciples would commemorate his life, death, and way to God. So, when we Catholics eat the bread and drink from the cup, we too seek to remember and imitate the great prophet from Nazareth, who we call Lord and Savior, and to make Christ viscerally present among the community of believers and to the world. We too accept the call to solidarity with the sinned-against.

At this time of racialized violence against so many, the responsibility to solidarity becomes especially pressing for all who claim to be disciples. Are we imitating Christ by acknowledging our ambiguous U.S. context, listening to the stories and anguish of others, and acting for the healing of the wounds of sin and for the flourishing of the sinned-against? Is our multiracial and multicultural church embodying what the teachings and the life of Jesus have to say to those who stand, at a moment in human history, with their backs against the wall? These are questions to which many Asian Americans are awaiting a response from their fellow citizens.

My father-in-law awaits a response as he ages and wonders what Catholics do for the world.

My wife awaits a response as she feels fear creep in daily during her commute.

My sons await a response as they are blamed for COVID-19 and seen as “other” by ignorant schoolmates and adults.

As a husband and father who cares for my family, I do the best I can by them. But I too await a response from my fellow Catholics. I await large-scale solidarity with the sinned-against.