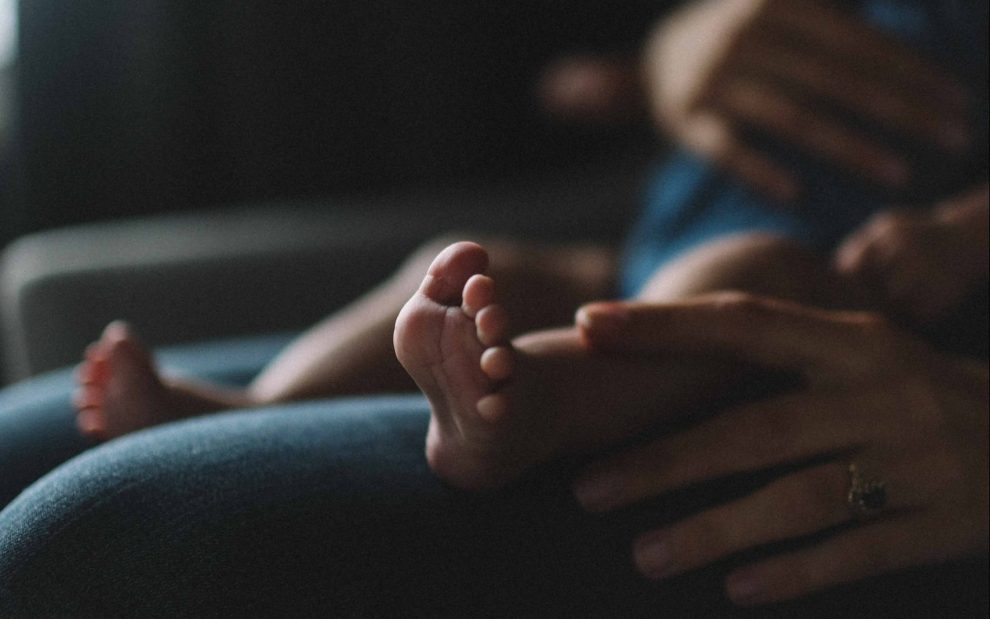 Katie is a 25-year-old single mom of two young children: a preschooler and burgeoning toddler. Living in a small town in rural Pennsylvania, Katie works in child care at a local day care center, where the children of parent employees are permitted to accompany their moms and dads during their working hours. The perk of the job is free child care—an expense that would otherwise be unaffordable for Katie. The downside is that she is with her two children around the clock and while at work, never getting a break from being a mom.

Katie spends her nonworking moments in a flurry of feeding, caring for, and shuffling her children to various doctor and therapy appointments (both of her kids have special needs, particularly her toddler, who has a host of medical issues). The father of the children sporadically and inconsistently asks to spend time with the 4-year-old before disappearing for weeks on end. He isn’t involved with the toddler’s life whatsoever. His financial contribution to the children’s needs is minimal. Katie says she desires a consistent fatherly presence in her children’s lives, longs to share the burdens of parenthood with someone else, and constantly worries about money. She is anxious about her ability to meet her family’s financial necessities and worries about addressing their emotional needs.

Even in her exhausted state—we spoke at 10 p.m., after she finally got both kids to sleep and dinner for herself—Katie’s deep love for her children is evident. So are her concerns about parenting. Much of her daytime energy goes toward caring for other people’s kids—that’s how she pays the bills—and when both of her children vie for her attention at night, she feels torn. “There are two of them and only one of me,” she says.

In Katie’s words, she’s drowning. And in the words of a group of social worker researchers, she’s the head of a “fragile family.”

What are “fragile families”?

In 1998 researchers out of Columbia University and Princeton University embarked on a study of epic proportions: They visited the maternity wards of hospitals in 20 U.S. cities to interview the parents of nearly 5,000 newborn babies, with an oversampling of unmarried parents and their children. Because of their higher risk of poverty and family dissolution than traditional families, one of the study’s founders, Ron Mincy, termed this group of unmarried parents and their children “fragile families.” The study—which has gone on to follow the large study sample through the present day—is known today as the Fragile Families and Child Wellbeing Study (FFCWS).

To be clear, “fragile family” is not a pejorative term. Rather, it is one that captures the vulnerabilities children and parents face when they lack the relational and financial stability that, while certainly not guaranteed, more likely accompanies marriage between a child’s parents.

The FFCWS collects information on the conditions, capabilities, relationship dynamics, and outcomes of fragile families through an ongoing series of participant interviews and surveys (the sixth round of data collection just finished in 2020). Through this longitudinal study of the participants’ lives, the researchers seek to gain a more complete understanding of the emotional, mental, behavioral, and social development of children within fragile families. By learning more about unmarried parents and their children, the researchers hope they can inform community leaders and policymakers in designing programs to more effectively meet their family needs, thereby strengthening and improving the outcomes of the children within them.

Fragile families are of particular interest to Catholics because children born into them are often the ones whom the pro-life movement (as many people understand it) works so hard to protect from abortion. Data show that nearly half of women who receive abortions do so because they are having relationship difficulties or want to avoid single motherhood. Financial stress plays a major role in women’s decision making as well.

Children in fragile families, in other words, are babies who made it to birth. Unfortunately, they are often neglected by the pro-life movement at that point.

Angela Howard-McParland is a Catholic leader who has woven her interest in expanding the conversation about what it means to be pro-life into her various ministerial roles over the past decade. Since Howard-McParland considers the Catholic Church’s teaching on abortion to be communicated loud and clear, she focuses her energy on other aspects of the pro-life pie.

As a Catholic campus minister at Brown University, she took students on trips to the border to learn about immigration justice; incorporated the study of encyclicals concerning health care, living wages, and economic justice into her Rite of Christian Initiation of Adults (RCIA) curriculum; and hosted dinners at her home with discussion themes like “What is a preferential option for the poor?” Through each avenue, Howard-McParland aimed to convey that Catholic social teaching is not just about meeting people’s basic needs but also about meeting the conditions required for people to flourish.

Most students were receptive to considering the various facets of the church’s pro-life teaching. Yet others wondered why the Catholic campus group wasn’t praying the rosary in front of Planned Parenthood. With these students, Howard-McParland found that she was rarely successful in expanding their understanding of what it means to be pro-life. “When I would talk about immigration, the death penalty, and economic justice, I’d get met with ‘nothing else matters if all the babies are killed,’” she says.

Catholics, Howard-McParland emphasized, can care about babies in utero and can—indeed, should—care about what happens to them once they are born. “Being pro-life,” she says, “means enabling people to be who God created them to be. It is not pro-life enough just to keep someone alive.”

The FFCWS, first and foremost, illustrates the importance of paying attention to children in fragile families by highlighting just how vulnerable they are.

Irwin Garfinkel is a professor at the Columbia School of Social Work, a world-leading researcher on poverty and the welfare state, and one of the FFCWS founders. When I ask him for his take on how children in fragile families generally fare, based on his analysis of the information collected through thousands of FFCWS interviews and surveys over the years, he shakes his head.

“On average, not so well,” he says. “There are a number of children who are resilient and faring well, so it’s not a death sentence. It’s not even a sentence that for sure they are going to end up at the bottom. It’s just most of them will.”

But perhaps more importantly, the FFCWS highlights particular areas of struggle that fragile families face, giving public and religious leaders a clear road map of issues to address when considering the needs of vulnerable children and their families. From a Catholic perspective, the needs that the study reveals align closely with the themes of Catholic social teaching, thereby demonstrating just how much the study ought to inform our pro-life agenda.

How to become a wholly pro-life Catholic

The reality of bipartisan politics in the United States—or probably politics anywhere, for that matter—is that there will never be the “perfect Catholic” candidate, party, organization, or platform, one in which all kinds of life are honored. How then should Catholics develop and maintain a consistent ethic of life that will inform our conversations, decisions, and actions so we can operate in a way that most aligns with the gospel?

A starting place, according to Benedictine Sister Mary Ellen Plumb, who has spent her life championing pro-life issues (she has rallied for nuclear disarmament and carried signs at the March for Life), is turning to the Catholic idea of conscience formation. The Catechism of the Catholic Church tells us that conscience formation is a lifelong task, suggesting that knowing right from wrong isn’t as simple as learning about one issue and making all of our decisions based on it.

“A well-formed conscience develops over time and in particular situations,” Plumb explains, boiling her process down to the acts of learning, listening, and praying.

“Every time I can, I read up on people who have either stance on abortion, on euthanasia, on the death penalty,” she says. “I ask people about their experiences. And in that, I pray about everything I read and know so that I can form what I believe is my decision-making system.” Hand in hand, the FFCWS and Catholic social teaching provide a few good ideas of areas to learn about when informing our consciences regarding the well-being of vulnerable children.

Here are three topics to dig into:

How to become a wholly pro-life parish

Forming conscience and adopting a more expansive pro-life understanding are not just tasks for an individual. Parishes and their pastoral staffs have a role to play through the liturgies they craft, the homilies they preach, the programming they provide, and the causes they support.

Here are some ways that parishes can boost their pro-life efforts: