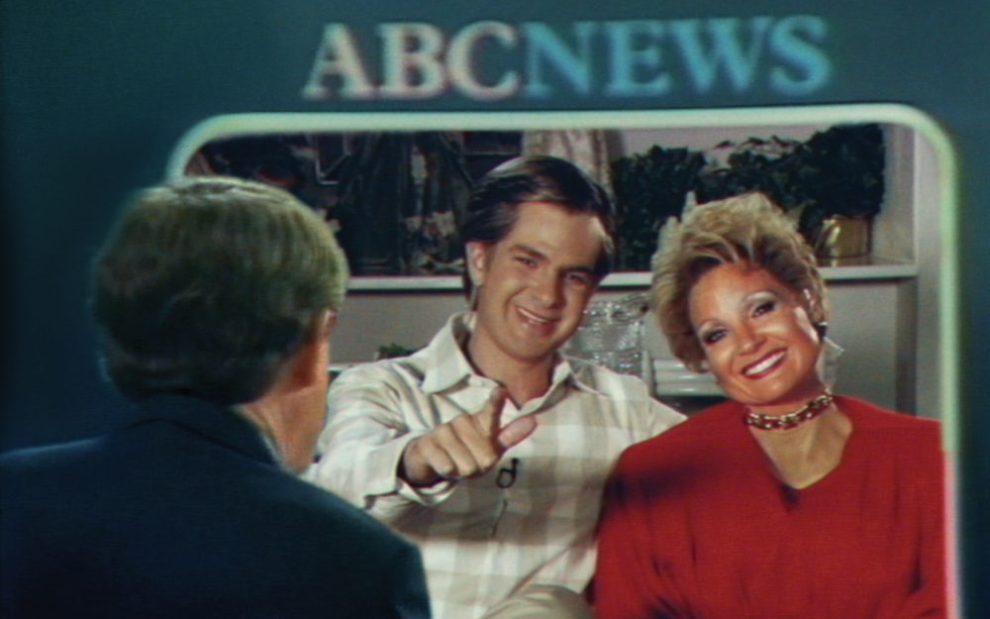 Water parks, swirling cameras, gospel choirs, mink coats, televangelists, and, at the center of it all, Tammy Faye. When the PTL (short for “Praise the Lord”) television network began broadcasting to 52 countries around the world, it is difficult to imagine what people not living in the United States would have made of Jim and Tammy Faye Bakker. Theirs was certainly an “American” brand of Christianity. Raised in the Assemblies of God tradition, the Bakkers embraced—perhaps even helped—shape the 1980s “American dream,” with a love for The Tonight Show, Disneyland, wealth, and Jesus. What resulted from this unique combination was feel-good televangelism on a grand scale, the third most popular theme park in the United States, called Heritage USA, and a “prosperity gospel.”

The new film The Eyes of Tammy Faye, and the documentary which it is based on, charts this roller coaster ride in popular American culture through the experiences of its most empathetic, perhaps most intriguing figure, Tammy Faye. this both helps the film and poses a challenge for the filmmakers and the audience. Tammy Faye is much more complex than the often uncharitable caricatures she is portrayed as. Jessica Chastain offers an exceptional and nuanced performance that draws us into Tammy Faye’s experience and meaningful contributions to society.

However, the religious and cultural phenomenon of the Bakkers’ unique brand of televangelism, business, and American Christianity moves the conversation beyond biography and into the spheres of theology, politics, and justice. this is where the film wants to go, most tellingly in its final scene that creates an almost hallucinogenic crosscut sequence juxtaposing humble Christian redemption with American exceptionalism.

Along the way the film and its characters raise some significant questions: Is God at war with a liberal agenda? Is ministry and trust in God intended to bring financial success? Is there a limit to God’s love? Does being a Christian entitle someone to judge others as sinful? What is the role of television, video, and technology in sharing the message of Christianity?

That’s a lot to unpack in two hours, and the film does this somewhat unevenly. More often it attempts to highlight the ways in which Tammy Faye navigates these things. She rejects the notion that there’s a limit to God’s love, preferring instead to use her voice and platform to offer love and compassion rather than judgment. This is most movingly depicted in an interview she conducts with Steve Pieters during the height of the AIDS epidemic. Pieters is a Christian pastor, who in the course of the interview shares that he is gay and has contracted AIDS. Hearing of his suffering and the lack of empathy he receives from Americans who identify themselves as Christian, a teary-eyed Tammy Faye pleads with her viewers to be more Christlike and caring. It’s a beautiful sequence given her audience and the fear and condemnation of the time. It’s made all the more powerful knowing that the film uses almost the exact dialogue taken from the original broadcast.

As to the question of God desiring material wealth for Christians and a “prosperity gospel” indicating God’s favor, the film is much less vocal. On the one hand it shows how the desire for wealth corrupts Jim to the point of using others, destroying relationships, and breaking the law. On the other hand, it portrays Tammy Faye as oblivious or indifferent to the actual source of the finances that support her lavish lifestyle. Absent is any presentation of the experiences of those who are taken advantage of financially. Like the startling 1972 Academy Award–winning documentary Marjoe, the film seems more enamored with the story of those using religion to make money than those religious people who are persuaded to sacrifice their money. Only Tammy Faye’s mother raises a contrary voice, saying, “Serving God don’t feel like it should be a money-making opportunity.” But even she is persuaded to accept a mink coat from her daughter.

Intriguing as well is the near absence of any critical presentation of the proper use of television and media to present the gospel. Christian television appears as ordinary a facet of American life as the news networks whose blurbs about the Bakkers fill the film. Is the subtext that Tammy Faye and Jim are to be celebrated because they made “Christian television” immensely popular? Does television popularity in America trump all other values or stand as meritorious in and of itself? Consider here the esteem afforded to Archbishop Fulton Sheen and Mother Angelica in American Catholic circles. Intriguingly, both Tammy Faye and Mother Angelica got their start in television on Pat Robertson’s television network. Tammy Faye explains her love for the camera by saying the “camera is a person.” Positively, we can see how this humanizes the medium. Negatively, we can observe how it views the person as a passive recipient without a voice. The communication is one way. The medium lends itself easily to entertainment.

Is ministry and trust in God intended to bring financial success?

Yet amid all these complex questions let us not forget to celebrate something the film powerfully highlights. Early in the film Tammy Faye, Jim, and their newborn daughter are invited to Robertson’s palatial home for a party. Tammy Faye, alone taking care of her child, fills her plate and walks toward the diners. She notices the women sitting at one table and the men at another. Jim, Robertson, and the Rev. Jerry Falwell are seated at the higher table engaged in religious and political discussion. Tammy Faye pulls up a chair and makes herself a seat at that table, despite the clear cultural and patriarchal resistance. The scene is exceptional as a symbol of her accomplishments as a whole. She sees no reason why she cannot serve God on television in an equal capacity to the others at that table. She has a God-given gift for connecting with people and refuses to let others keep her from using it.