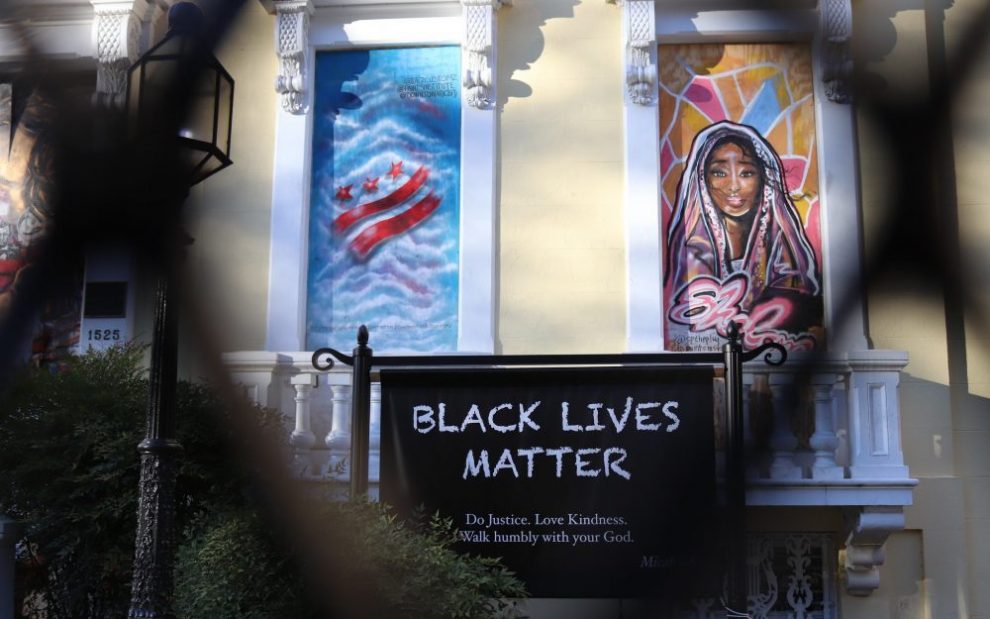 Recently, during breakfast with a good friend, the conversation suddenly became tense when I made a comment about critical race theory (CRT). My friend felt strongly that CRT has no place in the Catholic Church; I disagreed. She went on to say that Catholics who support this theory should be officially sanctioned. I respect my long-time friend’s opinion—she is a theology professor at a prestigious Catholic university—but I could not agree. I insisted that CRT intersects easily with Catholic social teaching; in fact, CRT shines light on our journey as followers of Christ. At this, my friend pushed back her chair and left the table without even a goodbye. I stared after her in disbelief.

This incident continues to disturb and perplex me, and I’ve become increasingly concerned as I’ve recognized that my friend is not alone in her opinion. Catholic World Report claims that CRT is “divisive and harmful to the minds and hearts of young people,” because its “key, underlying assumptions are not in harmony with Catholic teaching.” The National Review expressed a similar perspective, stating that “the administrators of any Catholic school should recoil from” CRT’s tactics with its “tired atheist tropes of division and hopelessness.” Crisis Magazine insists that CRT “leads to jealousy, envy, and pride.” Many Catholics apparently believe CRT would create a “reverse racism” that typifies all white people as being irredeemably guilty of racist thoughts and actions.

As I read and listen to these viewpoints, I realize the United States is facing a crisis of knowledge—or perhaps I should say a crisis of ignorance. Many Americans (including Catholics) do not understand what CRT is and so base their ideas on inaccurate information. They fail to fact check. Many people seem to have never learned (or have forgotten) how to practice rigorous intellectual analysis and so swallow whole whatever they read or hear.

I fear many of us have divorced the spiritual from the intellectual as though they are two opposing forces rather than God-given attributes that support each other. Distrust of anything “academic” has helped create a society where lies flourish. With lazy thinking and a willingness to accept whatever extravagant falsehood comes along, society has become steeped in lies. To make matters worse, Catholics, in particular, are often so concerned with a single issue that they ignore the wider perspectives available through study and analysis.

In the 17th century, the Inquisition forced Galileo to recant his statement that the Earth revolves around the sun. According to the Catholic authorities of the day, Galileo’s new knowledge was a threat to biblical truth. Since then, fortunately, the church has come to understand that all knowledge is from God. Knowledge is listed as one of the seven gifts of the Holy Spirit—and the fear of new knowledge can be interpreted as a denial of God. This connection between God and knowledge means we must be careful when sorting lies from truth. We do not want to repeat the dangerous mistakes of the Inquisition, labeling truth as lies and lies as truth.

The Bible says the truth matters. “For we cannot do anything against the truth,” writes St. Paul, “but only for the truth” (2 Cor. 13:8). Truth sustains our faith and guides religious imagination; lies undermine both. No real knowledge can exist without the undergirding of truth.

What is critical race theory?

CRT is a form of truth-seeking. It is not some devious, anti-Christian ideology, nor is it intended to feed political partisanship. Instead, it is a practical tool that examines how issues of race intersect with law, politics, and society. It analyzes the persistence of racial inequality with rigorous evidence-based study. In doing so, it provides guideposts toward fair policies in a nation torn by racial strife.

CRT is not concerned with individual sin but speaks instead to societal sin. It speaks to the law. Historically, the law has been complicit in upholding white supremacy. This is a reality that persists regardless of individuals’ thoughts and intentions. In the second half of the 20th century, civil rights battles became nearly impossible to win in courts of law because the legal definition of racism had moved toward individual intent. In other words, a person could not be convicted of racist actions unless the court could prove undeniably that they had racist thoughts. This, of course, was nearly impossible to establish, and, meanwhile, people of color were suffering within a system that was biased against them at multiple levels, regardless of the intent of individuals. As Martin Luther King Jr. said, the law cannot address what’s inside a person’s heart, “but it can keep him from lynching me, and I think that’s pretty important.”

The law can be either an instrument of oppression or of liberation. This is not a radical, new idea; it’s the same truth the American patriots proclaimed when they shouted, “No taxation without representation!” CRT reveals how those with wealth and power have historically used the law to maintain their power. Using this perspective as its lens, CRT points to what it would take to achieve justice through altering laws in a way that then alters society. This is a thoroughly biblical stance, supported by verses such as Isaiah 10:1–2: “Woe to those who make unjust laws, to those who issue oppressive decrees, to deprive the poor of their rights and withhold justice from the oppressed.”

Far from undermining Catholic faith, CRT actually intersects with Catholic social teaching, which the U.S. Conference of Catholic Bishops defines as “a central and essential element of our faith” that is “built on a commitment to the poor.” The USCCB goes on to describe Catholic social teaching as having its roots “in the Hebrew prophets who announced God’s special love for the poor and called God’s people to a covenant of love and justice.” Catholic social teaching, the bishops say, is “founded on the life and words of Jesus Christ, who came ‘to bring glad tidings to the poor . . . liberty to captives . . . recovery of sight to the blind’ (Lk 4:18–19), and who identified himself with ‘the least of these,’ the hungry and the stranger (cf. Mt 25:45).”

In 1961, Pope John XXIII issued Mater et Magistra (On Christianity and Social Progress), in which he stated that the church must concern “herself too with the exigencies of man’s [sic] daily life, with his livelihood and education, and his general, temporal welfare and prosperity.” These are the very exigencies with which CRT is also concerned. Pope John then went on to explain how the church should practice her social teaching:

“There are three stages which should normally be followed in the reduction of social principles into practice. First, one reviews the concrete situation; secondly, one forms a judgment on it in the light of these same principles; thirdly, one decides what in the circumstances can and should be done to implement these principles. These are the three stages that are usually expressed in the three terms: see, judge, act.”

CRT gives us tools to see and judge our society, the first steps of Catholic social teaching. It is then up to us to act.

Instead of seeing CRT as a threat to the Catholic faith, we should recognize it as a powerful lens for examining who we are, both as Christians and as Americans. It sheds light on our divided nation, allowing us to see the historical factors that shaped who we are today. It helps identify what is admirable and dishonorable in our nation, and it gives a map to follow as we seek to build a better nation for ourselves and for our children. It allows us to contemplate our world and pledge to become coworkers in God’s mission of justice on earth.

The U.S. Catholic Church has work to do. Catholics cannot stand by as states create voting legislation based on lies. Catholics cannot be silent while governors sign laws that forbid students from learning the truth about our nation. Catholics need to listen critically, even to church leaders, when they endorse lies.

CRT is not concerned with individual sin but speaks instead to societal sin.

Catholic social teaching requires Catholics to be critical consumers of knowledge. We must engage with complex and even controversial issues using both our faith and intellect. CRT calls people of goodwill to do just that. It challenges Catholics to engage with Christ in new ways as we spread the gospel with integrity and authority. It insists that we interact with Catholic social teaching with our minds as well as our hearts. It brings facts and scholarly evidence to the table. In doing so, it strikes back at a culture of easy lies and biased half-truths.

If we can tolerate uncomfortable conversations like the one I had with my friend over breakfast, we will create a space where CRT can enter into deep spiritual discussions with Catholic social teaching. Fear should not hold us back from engaging in these dialogues. If CRT delivers truths that are hard to hear and bitter to swallow, still we must listen for God’s voice. Catholics have a spiritual and moral obligation to engage with those truths prayerfully, seeking accurate knowledge about who we are and how we got where we are today in the United States.

Knowledge is both a gift from God and a way to God. Loving one another as individuals is not enough if we choose to deny the truth of our history. Scripture enjoins us to “maintain the right of the lowly and the destitute” (Ps. 82:3); to “learn to do good; seek justice, rescue the oppressed” (Isa. 1:17); and “to love kindness, and to walk humbly with your God” (Micah 6:8). It is impossible to obey these biblical commandments while being afraid of the truth.

U.S. Catholics, we have a spiritual and moral obligation to learn the truth. The truth matters.