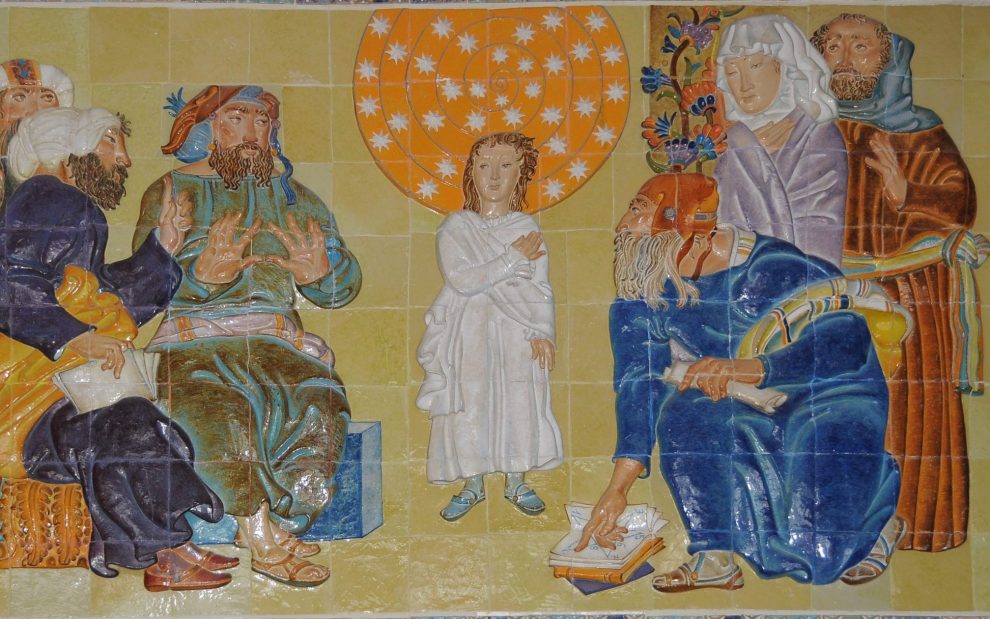 On May 25, 1979, 6-year-old Etan Patz disappeared while walking the two blocks from his home in New York City to his school bus stop. He was never found. In 1983, in response to his and other prominent disappearances, President Ronald Reagan designated May 25 as Missing Children’s Day.

Just a few weeks after Missing Children’s Day this year is the feast of the Immaculate Heart of Mary. The feast focuses on Mary’s interior life, her joys and sorrows. One can ask Mary’s intercession for anything, of course, but this year’s near conjunction of Missing Children’s Day and the feast points to the special relevance she and Joseph have in this context. The feast’s gospel reading is one of the events that Luke says Mary “treasured . . . in her heart”: the loss of Jesus and his finding in the Temple (Luke 2:41–51). For a reading on a Marian day, it’s remembered much more as a story about Jesus, not Mary—about the finding, not the loss or fear she and Joseph must have felt.

The trauma of a missing child is unique with its terrifying unknowns. One doesn’t know if the child will be found, be found alive, or have suffered some kind of abuse. Most parents experience their children going missing briefly, and even these brief scares can be frightening as the mind reels with tragic possibilities. A decade and a half ago, my 5-year-old daughter was lost—at least that was our fear. Rationally, we presumed she was safe, and statistics were on our side: Of around half a million children reported missing every year in the United States, nearly all return home. But until we knew, we didn’t know—and we probably weren’t very rational. I still remember the sinking feeling in my gut. It turned out she was playing with friends a few houses away, but when we checked there, the friends’ mother hadn’t known. She was probably only gone 20 minutes, but they were long minutes.

While my daughter was absent, my brain had time to entertain magical thinking about the worst that could happen, but I don’t think I prayed for her safe return, save possibly for a plaintive “Please, God!” Years later, this caused me to search church tradition for options for comfort when one’s child is missing. Naturally, I wondered about saints. Several are suggested for missing children, but there are seemingly none for the parents of the lost.

There are patrons of children, lost causes, lost and stolen items, and victims of physical and sexual abuse, a tragic reason for missing children (but blessedly less common than public perception and media coverage might suggest). But, again, these saints are primarily patrons for children, not the parents of missing children. Self-sacrificing parents would forswear prayers for themselves in favor of their missing children, but the parents are victims too.

While it seems odd that tradition didn’t grow around some patronal candidates, my point isn’t to understand why but to offer an obvious option: the parents of the missing Jesus.

The finding in the Temple is the fifth joyful mystery of the rosary. A couple paragraphs earlier in Luke, the last time we see the holy family in the Temple, Simeon, predicting the destiny of her child, warns Mary, “a sword will pierce your own soul too” (Luke 2:35). This is one of the sources for the seven sorrows of Mary, a devotion that calls the finding the “Loss of the Child Jesus.”

But until we knew, we didn’t know—and we probably weren’t very rational. I still remember the sinking feeling in my gut.

Generally, commentators don’t blame the parents for the loss of Jesus or typically address their anxieties. Instead, appropriately, most interpret the story’s theological meaning in terms of Jesus’ self-revelation. In Jesus of Nazareth: The Infancy Narratives (Image Books), for example, Pope Benedict XVI acknowledges the parents’ “days filled with fear and anxiety” but then concentrates on Jesus declaring his “divine sonship.”

Caryll Houselander, in The Reed of God, says of Mary, “Her son’s Godhead may well have made Him as puzzling and disturbing to the natural mother in her as all other adolescents are to their mothers.” After this insight into her humanity, however, Mary becomes a lens for seeing the heartbreak of centuries of human waywardness from God, not a woman worried where her son is.

These and other commentators don’t all ignore the parents’ plight; they just don’t seem very interested. Luke reports their search matter-of-factly, saying nothing about their mental state. It’s not crucial to the story, which, of course, is about Jesus. These many reflections on the meaning that can be found in the finding are important to ponder—to keep in one’s heart—because they plumb the ultimate significance of the story. At the same time, it’s compassionate to acknowledge the holy family’s distress and their very human responses.

In the end, as I did, the holy family finds their missing child. But until they did, they didn’t know they would. Each of the 20 minutes my daughter was gone was more desperate than the previous. The passing time didn’t make me think it was more likely we’d find her in the next minute; it only seemed further away. Three days is unimaginable.

So when they find their son, in a tone recognizable to any parent, Mary’s words succinctly convey the desperation they had felt: “Child, why have you treated us like this? Look, your father and I have been looking for you in great anxiety.” In one of the handful of times Mary is quoted in scripture, Elizabeth Johnson, in Truly Our Sister: A Theology of Mary in the Communion of Saints (Continuum), finds an “unmistakable tone of rebuke and reproach accompanying their relief”—like a desperate exhalation after three days of held breath. I might have said the same to my briefly missing daughter if she hadn’t been just 5. After three days of looking for a 12-year-old, Mary’s restraint is admirable.

Just as he leaves out the anxieties of the search, Luke doesn’t share the warmth in the finding—the expressions of love and gratitude, the never-let-you-out-of-my-sight-again embrace. Instead, he favors Mary’s more blunt comments that elicit Jesus’ self-revealing epiphany. Jesus responds that he must be about his Father’s work, an answer Luke says his parents didn’t understand. For any parent, a missing child is incomprehensible. Mary and Joseph don’t know why Jesus went missing, and his explanation for it must have been disorienting. It called for a theology that hadn’t been invented yet.

Mary and Joseph don’t know why Jesus went missing, and his explanation for it must have been disorienting. It called for a theology that hadn’t been invented yet.

The theology they knew surely got them through this crisis, however, as perhaps evidenced by their instinct to go to the Temple. They were only days removed from Passover, the recognition of God’s covenant with God’s people. Just a few paragraphs and a dozen years earlier, we hear Mary’s bold expression of her faith in the Magnificat. Their trust in a faithful, just, and merciful God clearly sustains them.

Sometimes saints have seemingly little to do with their patronage. Despite being a patron of hairdressers, St. King Louis IX seems never to have been one. Some patrons are perfection personified, for example, martyrs who taunted their executioners. Mary and Joseph were parents of a missing child, and they reacted in a very human way after finding their son safe. If they didn’t understand their son, they understood the overwhelming mix of emotions such parents feel.

For both their trust in God and their very humble fallibility and mortality in the face of frightening unknowns, Mary and Joseph can be a source of comfort and hope for desperate parents.