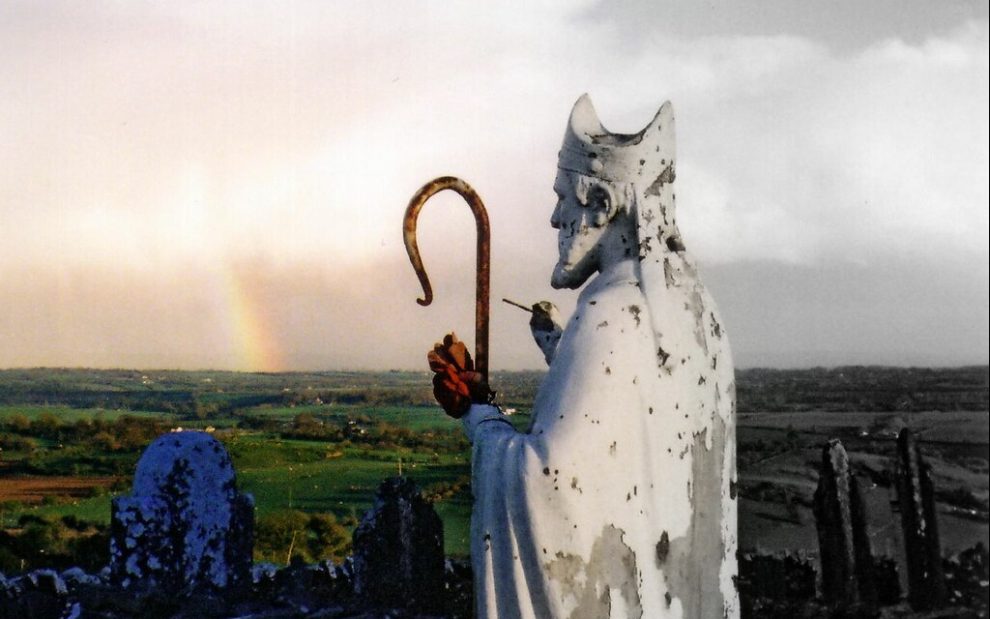 Years of prayer on the land kindled a fire in St. Patrick. He escaped from Irish captivity back to the Roman Empire of his birth, only to be shown by the Voice of the Irish in a vision that his true self was found in the land of his captivity.

Upon his free return, Patrick brought the gift of Christ to the Irish, who adopted him into their tribes and revealed to him undiscovered parts of the Gospel. In Ireland, Patrick ran a new gauntlet that broke him open to a deeper well of power than those within the Empire had fully seen, a well that renewed the church and began a new reordering of the world.

The number of years doesn’t matter. It was Patrick’s captivity that mattered, the crucible that distilled the essence of who he was. Once the feelings of struggle and angst faded, the impact remained. It left a permanent longing to return to the place and the people who made him, to return to the purity of the experience of saying a hundred prayers and becoming the winter storm that surrounded him, to becoming one with the Voice of the Irish.

Crossing the Irish Sea likely was one of the highpoints of Patrick’s life, honing the effect of his six-year captivity into a single point. Patrick in that moment knew the power of Amairgin, the mythical poet warrior of the Gaels, who defeated the Tuatha Dé Danann, “the tribe of gods,” or the ancestral spirits of Ireland. Riding the waves just before landfall and the final battle, Amairgin chanted his victory:

I am Wind on Sea,
I am Ocean-wave,
I am Roar of Sea,
I am Bull of Seven Fights,
I am Vulture on Cliff . . .
I am the Point of a Weapon (that poureth forth combat),
I am God who fashioneth Fire for a Head.

It was with fire for a head that Patrick returned to Ireland. It was the season of Beltine, the sacred festival that opened the pastures, and by custom the tribal chieftain was to light his fire before anyone else. It was also Easter. Patrick, as his first act, lit his paschal fire before the chief, defying the royal prohibition. Enraged, the chief and his warriors set out to hunt down Patrick and his band.

There is perfect symmetry in this tale: Patrick left Ireland and returned in the same way, running for his life. In his Confession he tells us he would do this until he died: “Every day I keep expecting to be murdered, assaulted, sold back into slavery or some such thing.”

Back in Ireland, Patrick was home.

Patrick, as his first act, lit his paschal fire before the chief, defying the royal prohibition.

The story of the Beltine and paschal fires, like many legends, was written down centuries after Patrick lived and can’t be historically verified in the way some moderns seem to think it needs to be. The need for historical verification misses the reason why the Irish tell the story. It captures the essence of Patrick’s missionary character.

Patrick was probably not the first Christian missionary in Ireland, but he was the most significant. Patrick threw himself into the island with reckless abandon, going to the wildest hinterlands. Outside the Empire, Patrick had to work within tribal customs and negotiate his very presence. His long captivity meant he understood the nuances of the gift-exchange economy and dangerous whim of the warrior elite.

Patrick preached a way of life that re-ordered social boundaries, particularly regarding women and those on the lower end of the social order. The vow of chastity, often only seen as a constraint, also had a liberatory effect. Women could live with a new independence from men and they made up a large portion of Patrick’s tribe, including St. Brigid, the daughter of a slave and a tribal chieftain.

The new social order often upset elites who benefited from the old order. Patrick was imprisoned again, once for 60 days. Scholars see evidence of PTSD in his letters. They also point out an important paradox: despite Patrick’s brash assertion of himself and the seemingly chaotic tribal landscape, he was not martyred. In fact, there were no martyrs at all in Ireland, the only place in Western Europe where that can be said.

The tribal context of Ireland freed Christianity in interesting ways. With no Roman structure or urban centers, the church became centered now on monastic communities. These monasteries scrambled imperial standards with married abbots, greater female authority, and perhaps even a few women bishops.

Patrick preached a way of life that re-ordered social boundaries, particularly regarding women and those on the lower end of the social order.

Key to the renewal was that the philosophical template was not the Great Chain of Being, the hierarchical ordering of all creation according to complexity, and other extrinsic systems, but the rich philosophy of pastoralists and hunters, which emphasizes the animacy of all creation. Theology’s conversation partner was not abstract thought, but the lessons of the land and sky, leading to a more fully embodied spirituality, something Esther de Waal outlines in Every Earthly Blessing: Rediscovering the Celtic Tradition (HarperCollins).

Yet the innovation sparked by Patrick’s inculturated mission did not come at the expense of the Roman church. The Irish church saved Christian ideas and practices that were being lost in the crumbling Empire. Later, a wave of Irish missions swept across Europe and renewed the remnants, what Thomas Cahill champions in How the Irish Saved Civilization (Random House).

Patrick’s free-wheeling, walk-the-edge evangelization produced intense backlash. Detractors accused him of greed and brought forward an unnamed sin he committed before his captivity. Patrick responded with his Confession, an extended letter that along with his Letter to Coroticus gives us the most reliable details of his life. Through it we get a portrait of Patrick’s self-consciousness and intensity.

These remarkable texts also offer a window into Patrick’s love for the Irish: “For the love of my neighbors here in Ireland . . . I have traded my homeland, my family, and my very life for them—even if it means my death.” Patrick’s identification with the Irish is so complete that the abduction of some of his flock by slave-raiders causes him to write: “They hate us because we are Irish.”

The legends show us how the Voice of the Irish adopted Patrick and made him one of their own. In the stories, Patrick returns to the house of his old master and baptizes his son and daughters. He also baptizes the holy wells, the gateways to the Tuatha Dé Danann.

Patrick meets Tuán, from the first inhabitants of the island, who is said to have survived the waves of invasions by transforming from horse, to boar, to hawk, to salmon. Human once again, Tuán is reborn a final time in the waters of baptism.

In other words, Patrick baptizes the ancestors, the land, and all the spirits that dwell therein.

For the love of my neighbors here in Ireland . . . I have traded my homeland, my family, and my very life for them—even if it means my death.
—Patrick

The witness of St. Patrick is a purgative call to strip away the layers of superficiality that make the spirit world an optional, irrational add-on to human experience and not what the ancestors understood it to be—a crucial part of reality. Patrick’s experiences opened up for him the well of power that Amairgin knew: the ocean wave and roar of the sea, the speed of lightning and the stability of earth focus into a fire that transforms one’s being into the point of a weapon. This knowledge is like a dropped stone that sends ripples into the pond of the everyday and affects everything—unbounded by time and distance, things we mistakenly take to be absolutes.

To me, the most important legend of St. Patrick is of the paschal fire he lit when he first returned to Ireland. As the chieftain and his warriors pursue Patrick to avenge the Beltine insult, Patrick, head ablaze, starts chanting the Lorica. This remarkable prayer, also known as “St. Patrick’s Breastplate” or “The Deer’s Cry,” is an echo of protection songs found across the world among Indigenous peoples, invoking the protective power of the land, sea, and sky. Patrick adds a crucial twist: the Holy Trinity and the incarnate savior working through them to surround him and shield him from evil powers.

Patrick baptized the ancestors, the land, and all the spirits that dwell therein.

Did it happen exactly that way? Did Patrick become a deer? I like to think that those years of prayer in captivity gave him the power that Irish ancestors knew.

What is more important than the historical truth of the event is what the Irish mean by the story: Patrick, though you bring new ways, you learned them among us. In your captivity, you became captive to Christ. You ran away but returned, becoming an unredeemed captive for the sake of our redemption. Your prayer will invoke all the powers of this place and the spirit world and will forever unite the old and new ways. You are the new Amairgin and will forever be one of us, a true son of the Holy Island.

This is Part II of an essay series on St. Patrick by Damian Costello. Read Part I, There’s more to St. Patrick than shamrocks and beer