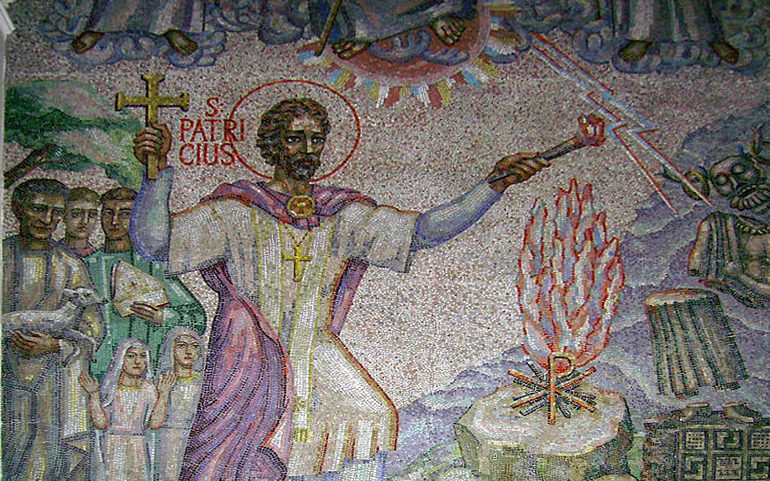 Many Catholics know little of St. Patrick beyond the kitschy mascot of clovers, green rivers, and beer. In reality, Patrick is a mythical hero born of blood and fire.

Patrick’s story has all the marks of North American adoption narratives, of settlers taken as captives who were completely absorbed into Native communities, remaining “unredeemed” in the eyes of settler society. Like Patrick, others found themselves transported back to the lands of their births, only to later return to the lands of their captivities and embrace “un-redemption.”

Stories like Patrick’s hold important lessons about human nature and ultimate meaning. His story needs to be told, not to romanticize the brutal events or justify the behavior of slaveholders, but because his witness speaks directly to the malaise of disbelief unique to “developed” societies, the spiritual apathy born of comfort and disconnection from ancestral patterns of life within which our species evolved and God became incarnate.

Sixteen-year-old Patricius, the person now known as St. Patrick, probably lost track of how many days they marched, but not the pain from the iron collar that chained him to the other captives.

Or the hunger. It was the first time he had gone days without eating. His captors kept up a relentless pace to evade the pursuing Roman army.

Patrick had been in his family’s villa, a large country estate of Roman nobility. A staff made up of servants and slaves kept the villas running for the Patricius, the noble class that believed itself ordained by nature to rule and the source of Patrick’s name.

No one saw the attack coming. Suddenly, half-naked Irish warriors were there, “like dark swarms of insects that emerge from the narrow crevasses of their holes,” a chronicler recorded about similar attacks.

The raiders sacked the villa and rounded up captives. Human beings were wealth—the equivalent of two years’ wages for a common laborer. Only those young enough to be pliant and old enough to be self-sufficient were kept. The useless were slain.

Now Patrick was no different from his family’s slaves with whom he marched under the watchful eye of Irish captors. Any sign of weakness could lead to execution.

Finally, the trail ended and opened up to a vista of the Irish Sea. The raiders found their currachs—small hide skin boats—loaded the captives and disappeared into the ocean.

Nobody knows how Ireland got its first Mediterranean name, the “Sacred Island.” It seems to have come from the closeness of what the people called themselves (Hierni) and the Greek word for holy (hiera). But perhaps it was sarcastic as the Romans scorned Ireland as the land of barbarians; A Latin poet of the age called them “a people half-wild and worse than hounds of war.”

Upon landfall, the captives were probably divided up and sold. Patrick said good-bye to anyone he knew and began another long journey on foot.

Stripped of his noble identity and of the trappings of the Church, Patrick re-learned his Christian heritage.

Patrick was now outside of the Roman Empire. The island was a patchwork of dozens of túatha, small tribal territories. The mild climate and high rainfall made for rich pasturage and a large livestock population. He passed mountains, bogs, forests—no towns. The Irish lived on the land.

After about 20 days Patrick arrived at the Wood of Fochoill near the West Coast. Scholars think this is in County Mayo. For Patrick, it was the edge of the world.

Once waited on, now Patrick served the animals. He spent long periods of time alone in the hills, enduring cold, hunger, and fear; Wolves roamed Ireland at this time and cattle raiding was a source of constant warfare.

Patrick was drawn into an exotic tribal culture. He learned a new language, rich with storytelling. He probably saw Beltine, the festival on May 1 to open the pastures. Great bonfires were lit to implore the sun for good weather. Some fires were made in parallel lines and maybe Patrick helped drive the cattle through to be purified.

Patrick was purified as well. As the grandson of a priest and son of a deacon, he was surrounded by the Church from his birth. Yet he had no interest in the faith and imbibed the adolescent nihilism of the well-born; In his words, “I didn’t even care about myself,” let alone God. Stripped of his noble identity and of the trappings of the Church, Patrick relearned his Christian heritage.

With lots of time alone and buffeted by all the forces of creation, Patrick began to pray. Whether in his captors’ settlement or herding in the mountains, he remembers in his Confession: “I would get up each morning before sunrise to pray, through snow and frost and rain.”

Wind carrying sea air in from the coast and the morning fog embraced him. Deer, the sacred animal that Irish heroes sometimes became, visited him. Seeing his hunger and loneliness, the stars reached down and made themselves close. The whole time, a new fire kindled within him. In his Confession he recalls: God, who “protected me and loved me even as a father does his own child,” gave to Jesus “power greater than any creature of the heavens or earth or under the earth.” Power filled Patrick and made him new, saying, “I see now looking back that my spirit was bursting inside me.”

After six years in the Wood of Fochoill, Patrick’s spirit erupted into what the poet William Butler Yeats’ called the Celtic “fire in the head.” His unending prayer vigil on the land culminated in a dream. “You have fasted well—soon you will be going home,” a voice told him. Soon after, he had another one. “Behold, your ship is ready.”

The ports with boats to Britain were on the other side of the island. Gathering his courage, Patrick began the dangerous journey through the túatha. Only bards could travel freely outside their tribe, to say nothing of fugitives. He could be killed on sight.

I would get up each morning before sunrise to pray, through snow and frost and rain.
—Patrick

Patrick made it to the coast and convinced a ship to take him on as crew member. After a three-day crossing, the party began a long trek through the backcountry. They ran out of food and almost starved. After 28 days they found a town.

Somehow Patrick escaped and made it home. Instead of serving the animals and being battered by the elements, he was swaddled in comfort and regained his exalted place in the social hierarchy.

HIs family asked that he never leave again and in those joyous moments, Patrick agreed.

The Celtic Fire returned. In a new vision, a messenger brought Patrick a pile of letters from Ireland. He read the top one and heard the people of the Wood of Fochoill sing in one voice “Holy Boy, come walk with us again.”

Overwhelmed, Patrick broke down and could read no more.

The vision dispelled the illusion that Patrick was trying to live. In Britain, civilization began tethering him down the minute he returned. He had to re-engage with the responsibilities of nobility, some of them onerous, such as tax collecting. The artificiality of the culture and seduction of comfort grated against his newfound idealism. He could not be the new person he had become and found his spirit withering.

Patrick found his faith in Ireland—in the land, the people, and their ways. But “faith” limits how we imagine the totality of Patrick’s transformation. “True life” better captures the liminal state of those transformed by captivity, how the simultaneous effects of terror, novelty, and intimacy break open the core of who one is. Only on the ragged edge of the known world could Patrick truly live in this world and the world of Spirit.

The Irish people knew who Patrick really was. Despite his unfree status in Ireland, Patrick forged deep relationships and became part of a community. Patrick learned that the land of what the Romans dismissed as sub-human barbarians was really the “Holy Island” and only there could he be “Holy Boy.”

His unending prayer vigil on the land culminated in a dream. ‘You have fasted well—soon you will be going home,’ a voice told him.

Patrick would escape back to the woods, and there would be no reclaiming him. “I ask that I might be allowed to die here for his name with these converts and slaves,” Patrick wrote in his Confession, long after his return to Ireland. “I traded in my free birth for the good of others . . . Here, in Ireland, is where I wish to live out my final days.”

Unredeemed captives like Patrick, those who survive the brutality of their abductions and embrace adoption, believe that in their new lives and communities they have found their true selves. In this, we see the essence of Patrick’s witness. It is not an accident that the spiritual apathy of his youth, born of comfort and domestication, was broken in his captivity. The breaking of the tethers of “civilization” allowed Patrick to develop authentic relationships with all the forces and beings from which he had been shielded. In the process, he discovered himself and rediscovered the Catholic faith.

The modern world rushes into the future and laments the malaise of disenchantment. Perhaps finding faith entails looking backwards into the past like St. Patrick, to the ways that the ancestors have connected to all that surrounds us for millennia. What this looks like, as with all aspects of the Gospel message, is for each to discern.

This is Part I of a series of essays on St. Patrick by Damian Costello. Read Part II: How St. Patrick changed Ireland—and the church.