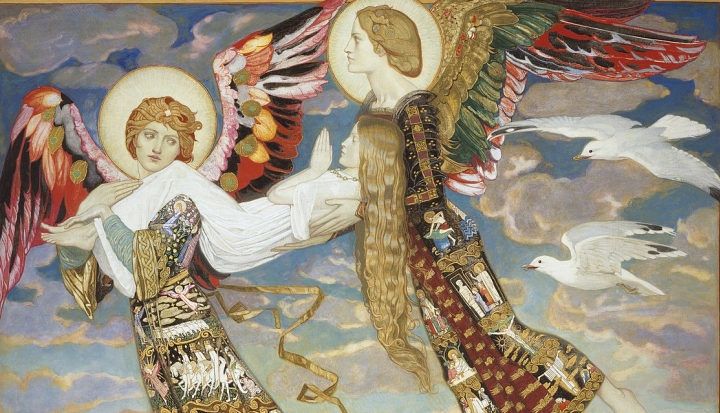 You may have seen the meme on social media: “A Muslim, a Jew, a pagan, and an atheist all walk into a coffee shop. They laugh and joke, drink coffee, and become friends: It’s not a joke, it’s what happens when you’re not a jerk.”

While I haven’t had an experience exactly mirroring that scene, I can say: “A Christian minister and a shamanic pagan talk about an ancient Irish religious figure: They find much in common.” That’s what happened in 2014 and 2015 when Lilly Weichberger and I presented several public dialogues focused on Brigid, whom Lilly reveres as goddess and I honor as saint.

The Brigid we know today is a mixture of legend and history. Worship of a goddess named Brighid began in first-century Ireland. She was the deity of healing, metalsmithing, and poetry. Symbolizing the arts common to the scattered Irish tribes, she created a sense of unity when the threat of Roman invasion loomed over the island. In the fifth century, Brigid of Kildare was a Christian leader of extraordinary charisma.

Bards and Druids sang Brigid’s praises at the time when Christ walked the earth. Christians in the Middle Ages honored her as Ireland’s “other” patron saint, alongside Patrick. She has many names—Bhride, Bride, Brighid, Brigid, Bridget—and many titles—Fair Maiden, Brigid of the Mantle, Brigid of the Fire, and Mary of the Gael. Her devotion is growing in the 21st century.

Legend says Brigid was born in the doorway of a barn on the dawn of February 1. Thus, she was born in between indoors and outdoors, winter and spring, and night and day. Born in liminal space, she serves as the doorway between realms and understandings.

Over the past decade I’ve led many workshops showing how to make a Brigid’s cross using wheat straw, usually fashioning them on her feast day, February 1. I’m surprised how people value these symbols and display them in their homes long after they construct them.

I know Christians, pagans, and even atheists who treasure their Brigid’s crosses. Traveling in Ireland, such crosses are still hung according to tradition by the doors of businesses, hotel rooms, and private homes. I jokingly refer to them as an “Irish mezuzah.” A neat connection happened at a workshop in Arizona where a participant said, “This is just the way we make them with my grandmother back in Ireland.”

Brigid’s home was Kildare, Ireland. Kildare means “Church of the Oaks,” which were the sacred trees of the Druids, suggesting that Kildare was a pre-Christian holy site. Her monastery there was established in the fifth century. Two Sisters of St. Brigid reestablished it in 1992. Since then it has grown into the Solas Bhride Centre for international justice, peace, and reconciliation.

There is a carved limestone statue of Brigid in Suncroft, a small village outside Kildare. A priest who had trained as an artist began the work. When he died, a lay woman with no prior experience of stone sculpture felt called to complete it. As she was finishing the sculpture, her labor revealed a fossil in the perfect shape of a crescent moon, at the intersection of the cross on Brigid’s chest.

The crescent moon is often associated with Celtic paganism, a symbol of the goddess. The nuns interpreted the crescent moon fossil as a modern miracle, “the presence of Brigid.”

According to Sister Rita Minehan, “Brigid the saint inherits much of the folklore associated with the goddess Brigid, a dimension which contributes to her popularity. It may be an exercise in futility to try separating the historical Christian Brigid from the goddess. . . . Neither the boundaries of Christianity nor the older beliefs can contain her exclusively.” Further evidence of Brigid spanning religious traditions came in April 2011 when the Dalai Lama visited the Solas Bhride Centre and posed with a Brigid’s cross.

The accounts of St. Brigid, written centuries after her lifetime, describe her multicultural background. Her mother Broicsech was a Pict, kidnapped into slavery from the land now known as Scotland. That may have encouraged her decision to follow the new religion taught by Patrick, who had also been brought to Ireland in chains. Brigid’s father was Dubhthach, a chieftain of Leinster.

Born to a slave mother, Brigid was mere property. Yet with noble blood in her veins, there was always the hope of greater things. In childhood, Brigid was handed over to a Druid priest, either as a foster child or a slave. The Druids were the spiritual leaders of ancient Celtic society. Brigid would have been steeped in their beliefs, in addition to her mother’s Christian faith. Born to parents of differing status, lands, tribes, tongues, and religions, Brigid was a “third culture” person, at home “nowhere yet everywhere.”

The difference in status between her parents may explain Brigid’s great compassion for the poor. As a young woman she made a habit of giving away her father’s goods to people in need—not necessarily with the chieftain’s permission. So Dubhthach decided to be rid of her as soon as she reached adolescence. He arranged to sell her to the King of Leinster.

As the chieftain and king haggled over a fair price, Brigid waited in her father’s chariot and prayed desperately. As she prayed, a hungry beggar approached. Seeking a way to help him, Brigid eyed her father’s sword, an heirloom weapon, inlaid with jewels. “Here, good man, this will provide for you.” The beggar took the sword and ran, clasping it to his chest. Moments later Dubhthach and the king returned.

“Father, Christ was here, in the form of a homeless man, starving and gaunt, so I gave him…”

As the chieftain exploded into curses, the king shook his head. “You’re trying to sell me a crazy woman—she’ll give away all my belongings! The deal is off.”

Brigid’s exasperated father realized that there was no hope of obtaining her value in sale and granted her freedom, to relieve himself of the burden of her care. Despite ill treatment by her father, Brigid sought reconciliation with him and was at his bedside when he passed away.

After being freed, Brigid returned to the King of Leinster seeking land for a monastery. Scoffing, he promised her “just as much land as you can cover with your cloak.” She smiled, nodded thanks, and knelt to commence earnest and lengthy prayers, to the amusement of the pagan monarch. When finished asking God’s favor Brigid stood and lay her mantle onto the ground, where it began to grow, and grow, and grow—until it had covered a vast tract of land that included the ancient holy site of Kildare.

There are many more tales in which Brigid confronts injustice, wresting concessions in ways that evoked admiration even from the authorities that she opposed. Inspired by Brigid, we can follow her along the in-between way, uniting forces that seek to divide. May Brigid spread her mantle in our troubled time, teaching us the ways of peace.