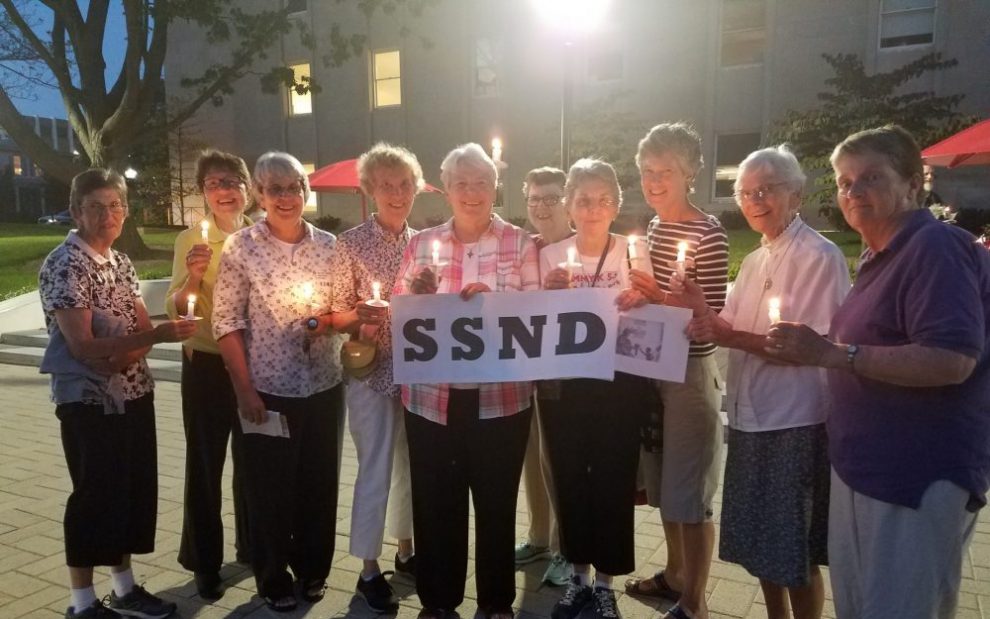 Despite President Biden’s commitment to unifying our nation, unity seems elusive within the political rancor. Catholics are not exempt from the discord, and, indeed, are often perpetrators of it.

Recently, Pope Francis urged Christians in the United States to seek unity in the spirit of “the prayer of Jesus, ‘That they may all be one’—unity that is not uniformity, no. Unity with differences, but one heart.” This builds on his exhortations in Fratelli Tutti (On Fraternity and Social Friendship), and Let Us Dream (Simon & Schuster),where he emphasizes the need for openness, dialogue, and encounter to guide our decision-making as we reach for a better future. He also identifies the leadership of women as critical for motivating this type of engagement.

As the church celebrates The World Day of Prayer for Consecrated Life, it seems appropriate to recognize the reservoirs of practical wisdom that women religious, in particular, can offer Catholics in the United States as we navigate this politically discordant time.

The charism of the School Sisters of Notre Dame (SSND), for example—their “gift of the Spirit to be shared in service to the church and world”—is unity. Indeed, they direct their “entire lives toward that oneness for which Jesus Christ was sent” (You Are Sent). This charism infuses the structures of their congregation and their engagement with the broader community.

In their constitution, You Are Sent, SSNDs recognize that promoting unity means engaging in a process of “being and yet becoming.” True development, they maintain, enables us “to become the persons God created us to be;” it “fosters both diversity and a potential for greater unity.” Participating in community and encountering others should expand one’s awareness of who God is, if one is attuned to the unique image of God reflected in the presence of others. One’s activity should grow to reflect this expanding worldview. The SSNDs are called “to be transformed and to transform our world.”

Participating in community and encountering others should expand one’s awareness of who God is.

The theological concept that grounds unity, as the SSNDs understand it, is “integral ecology,” which holds that all of creation is interconnected in our ever-expanding and evolving universe. This way of understanding ourselves in relation to the world incorporates both the scientific reality of existence and the spiritual reality of being made in the image of the Triune God, who is fundamentally relational: each person constituting and constituted by the others, inviting all of creation to participate in its love. Pope Francis has developed this theme in Laudato Si’ (On Care for Our Common Home).

The divine Persons are subsistent relations, and the world, created according to the divine model, is a web of relationships. … The human person grows more, matures more and is sanctified more to the extent that he or she enters into relationships, going out from themselves to live in communion with God, with others and with all creatures. In this way, they make their own that trinitarian dynamism which God imprinted in them when they were created.

Unless we begin to engage in this “trinitarian dynamism,” our pursuit of unity will be inherently misguided. For the SSNDs, God “reveals [God’s] will to us in [God’s] word; through persons; through the situations of life, the church and the world; and by [God’s] movements in our hearts.” This is why the SSNDs emphasize that their charism exudes “in a spirit of creative fidelity,” which is rooted in tradition “but [unfolds] in the present.”

When our horizons are expanded through encounter and education, we can develop a better understanding of who we are made to be—of our part to play in the grand drama of unfolding creation. We also make room to engage in authentic dialogue that fosters unity through responsiveness to others and our world—or at least that rejects the dominative, divisive partisan vitriol that is now commonplace. As Pope Francis reminds us in Fratelli Tutti (On Fraternity and Social Friendship), “In a true spirit of dialogue, we grow in our ability to grasp the significance of what others say and do, even if we cannot accept it as our own conviction. In this way, it becomes possible to be frank and open about our beliefs, while continuing to discuss, to seek points of contact, and above all, to work and struggle together.”

The SSND charism can support Catholic political and social engagement. As the SSND Constitution states, “the values, attitudes, and virtues that foster oneness in our faith community … are the same by which we promote unity among all people. As the desire of Jesus that all be one becomes more fully our own, our striving for unity embraces all humanity and the whole of creation.” And the letter from the Congregation for Institutes of Consecrated Life and Societies of Apostolic Life for The World Day of Prayer for Consecrated Life urges religious congregations to adopt the themes from Fratelli Tutti––such as encounter and dialogue––and lead the world in “accompanying, transforming, and creating.”

We should engage in the pursuit of justice in a way that invites greater participation from others and works toward inclusion, rather than dominance.

Through my own engagement with SSNDs, I have become convinced that encountering those who are vulnerable and marginalized necessitates moral growth: our ideological notions of justice simply do not fit perfectly within the complexities of human existence. We should engage in the pursuit of justice in a way that invites greater participation from others and works toward inclusion, rather than dominance. The SSND recognition that as we try to transform our world, we should be open to being transformed ourselves is paramount, and key to this endeavor is a commitment to reflective discernment––a commitment to pause before giving way to our initial, reactive responses.

If we are to come together as a church, leading the way toward unity for our nation, we should begin to foster a rich exchange of ideas and an attitude of respect toward all. Rather than accusing fellow Catholics who hold policy priorities different from ours as being rebellious, we should engage in dialogue with a commitment to rational, fact-based discourse; an appreciation of nuance; and an awareness that our political discourse and policy positions always affect real people in diverse ways—this is, perhaps, especially important when it comes to policy issues about which we have been inflexible.

By maintaining a “spirit of creative fidelity,” remembering that truth will expand our horizons rather than closing us in on ourselves, all Catholics can infuse unity into their political activity, and, like the SSNDs, can facilitate “that oneness for which Jesus Christ was sent.”

Image: Courtesy of the School Sisters of Notre Dame