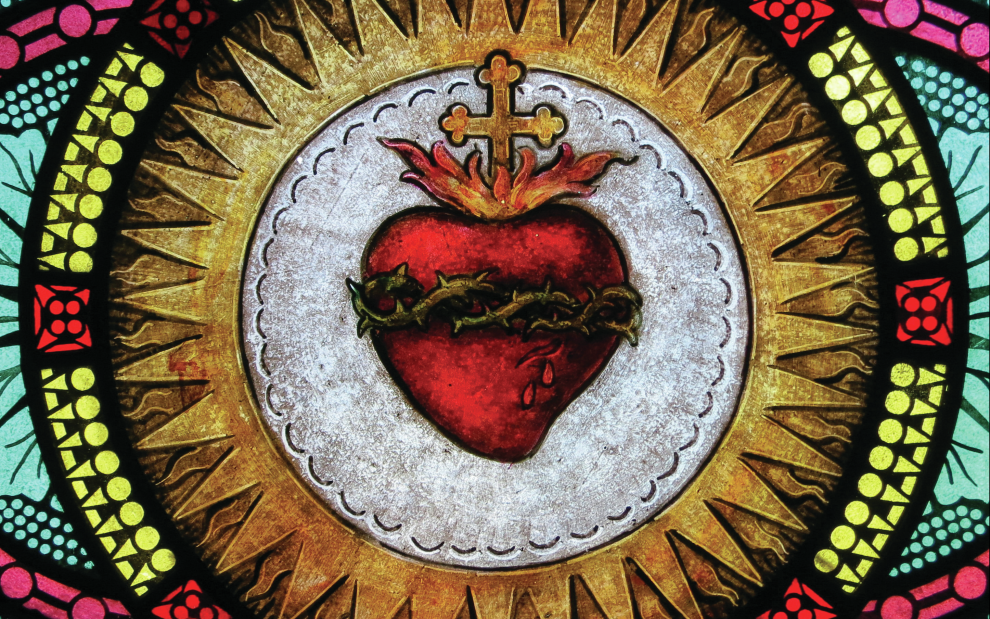 My great-grandmother’s house was full of mysteries. Full of secret rooms and eclectic memorabilia, the house always felt a bit like a treasure hunt. In the guest bedroom, the Sacred Hearts of Jesus and Mary portraits were prominently placed over the dresser. As a child, I thought they made the room feel a bit haunted. Jesus’ glowing heart surrounded by the crown of thorns with rising flames was somewhat terrifying when I woke up in the middle of the night.

Since 1856 the Solemnity of the Sacred Heart has been celebrated on the Friday after the feast of Corpus Christi. As a popular devotion, it emphasizes God’s love for humanity. The devotion originated in France. It was a particularly strong devotion promoted by virtually every pope since Leo XIII. Irish Catholic families, in both Ireland and the United States, were consecrated to the Sacred Heart, a practice that waned by the end of the 1960s. For St. Pope John Paul II, it was a popular devotion countered to growing secularism. St. Faustina identified it as a devotion of mercy in the face of suffering.

The Sacred Heart, they argue, “brings concretely to expression that Jesus, the second person of the Trinity, is a person of heart who lives with and from the heart, and who commands any who would follow him to love as he does.”

Weaving together Pope Francis, St. Pope John Paul II, Cardinal Walter Kasper, and Jesuit Father Karl Rahner, all of whom write of their strong devotions to the Sacred Heart, Eggemeier and Fritz prompted me to reconsider the devotion’s relevance in today’s world.

We do not have to hold onto everything that has ever been said in the theology of the devotion to the Sacred Heart.

“We do not have to hold onto everything that has ever been said in the theology of the devotion to the Sacred Heart,” argues Rahner, in order to reclaim the devotion in which we “turn toward the heart that was pierced, that loves, that loves us in the darkness of our hopelessness, that is God’s very heart.” The Sacred Heart, then, prompts us to ask where our own hearts are directed.

For the last 10 months, we have lived, prayed, and loved in the context of a global pandemic. The social and economic context revealed deep division and fracture. In Fratelli Tutti (On Fraternity and Social Friendship) Pope Francis catalogues the griefs and anxieties of 2020, calling the world to reclaim a sense of solidarity and love of neighbor. “Let us dream,” the Holy Father invites, “as a single human family, as fellow travelers sharing the same flesh, as children of the same earth which is our common home, each of us bringing the richness of his or her beliefs and convictions, each of us with his or her own voice, brothers and sisters all.” It is a powerful call to reject the throwaway culture marked by selfishness and greed.

Perhaps reclaiming the devotion to the Sacred Heart can draw today’s faithful into a deeper reflection about where our own hearts are directed. And so, as a new year begins, I pray that the Sacred Heart of Jesus illuminates the path of love and mercy in our broken world. “In the luminous and in the dark hours of life,” Rahner writes, “try to pray: ‘Heart of Jesus, have mercy on me.’”