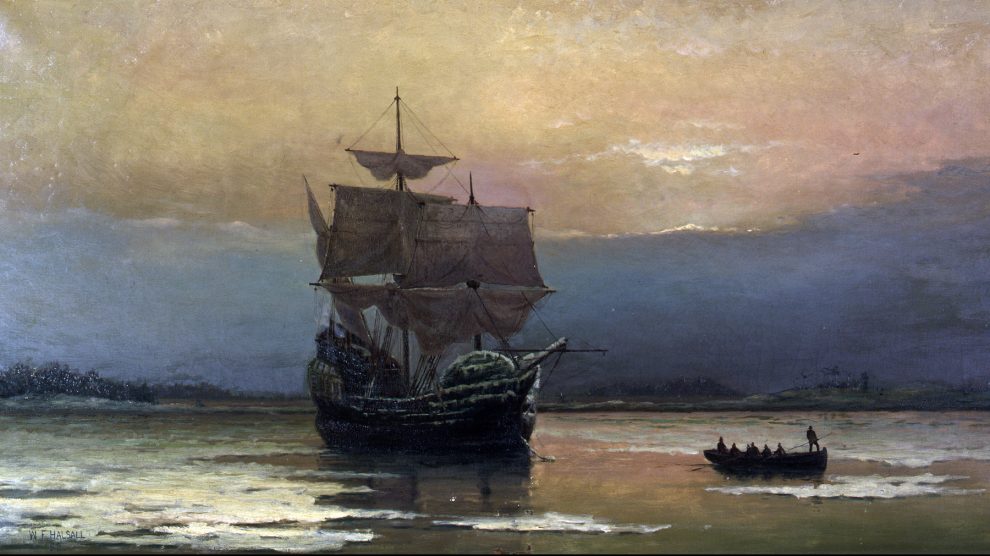 We’ve all heard of Squanto, the English-speaking Wampanoag Indian of Thanksgiving fame. No one forgets how he taught the Pilgrims to survive by adding fish when planting corn.

However, it’s the lesser-known details of Squanto’s life that are the real drama. As a slave, Squanto survived a more harrowing version of the Pilgrim’s own Atlantic crossing and established arguably deeper Old-World roots. Squanto became Catholic, a key spiritual ingredient to the resiliency that eventually guided him back home to North America.

In 1614, English colonists from Jamestown abducted Squanto and couple dozen other Wampanoag. They set sail for Spain, planning to add their captives to the 2–5 million Natives enslaved during the colonial era.

For six weeks, Squanto lay bound in chains in the darkness and filth of the ship’s hold. Rocking in the waves and battered by storms, he endured hunger and thirst, vomited from seasickness, and left behind everything he once knew.

But he also returned to the spirits. Young Wampanoag sought visions and honed their resiliency through a form of vision quest. Teenagers were sent into the wilderness to survive a winter on their own, a ritual that culminated with a ceremonial herbal purgation until one vomited blood.

This and other vision quests developed multiple virtues such as self-reliance, courage, and spiritual receptivity to the Manitou, or the gatekeepers of the spiritual power that imbue the whole world. Through visions, Manitou “adopted” chosen recipients as conduits of their particular power.

For six weeks, Squanto lay bound in chains in the darkness and filth of the ship’s hold. Rocking in the waves and battered by storms, he endured hunger and thirst, vomited from seasickness, and left behind everything he once knew.

Squanto had already been chosen. Tisquantum, Squanto’s full name, is the name of the Wampanoag Spirit of the Dead. The underwater was the threshold to its realm, and its power was invoked in healing ceremonies. The Spirit often appeared as horned serpent in visions to bind the recipients to its healing power, something that Squanto’s name enacted.

Even though Squanto was captured and bound, the Spirit of the Dead was not done with him. Pitching and rolling in the darkness of the hold, Squanto underwent a new vision quest, he and the Manitou bearing his name shape shifting in the underwater realm, neither of them dying but rebirthing for a world newly turned upside down.

Squanto emerged from darkness into the blinding Mediterranean sun. His English captors hauled him to Malaga’s slave market. Squanto was most likely destined for one of the surrounding sugar plantations, into which foreign slaves regularly disappeared.

Spanish friars, witnessing the sale of the Wampanoag, intervened. They purchased Squanto and the rest to save them from slavery and, in their minds, to save their souls.

Though not always meeting our modern standards of justice, Spanish clergy were the first opponents of conquest and slavery in the early 1500s. Unlike English Protestants, evangelization of Natives and Africans was a high priority for friars, and they had been doing so for over a century.

Squanto, freed from his chains, received the friars’ message but in a distinctly Native way. Abenaki author Joseph Bruchac captures it well when he writes that Squanto allowed the “men who serve the Creator” to teach him “about their ways of thanking the Great Mystery.”

Wampanoag speakers used the name Manitoo for God, emphasizing not a contemplative Mystery but rather a functional power. The Creator is not an otherworldly being understood on a cognitive level, but the totality of spiritual power ordering all in goodness.

Squanto attuned himself to the unique spiritual power of Christ, the earthly manifestation of Manitoo. Wampanoag spirituality placed great emphasis on the cycle between death and renewal and embodied it in multiple ceremonial practices throughout the year. Christ, with his journey from death back to life, personified this regenerative principle in a direct ceremonial relationship.

The Creator is not an otherworldly being understood on a cognitive level, but the totality of spiritual power ordering all in goodness.

Bound in chains, Squanto literally descended into the realm of the dead and his titular Manitou. When he emerged, he encountered the Manitou who went through a similar experience and broke the chains once and for all, healing his own body and that of the entire world.

It is fitting that a ceremony of water enacted this transformation in Squanto’s spiritual vision. He who was bound in the underwater realm was later ceremonially immersed in water to bind himself to the Manitou who defeated death, the Water Serpent of the Dead transfigured into the face of the Great Manitou. Jesus, the Wampanoag Spirit of the Dead-Resurrected, would guide Squanto’s survival in the new European world and his long journey home.

Some time after his baptism, Squanto began his unprecedented seven-year journey home. He made his way to England in 1617. Squanto then found employment as a translator and got as far as Newfoundland. He was forced to return to England but made a providential connection: Thomas Dermer, an influential navigator. Together they convinced a wealthy investor to finance an expedition and, in the early 1620s, Squanto was back in Dawnland (the Native name for the New England shore).

However, there was no beautiful homecoming for Squanto. Patuxet, his home village and the future site of Plymouth, was wiped away by disease. Upon seeing the ghost town, one of Squanto’s English companions called it “a new found Golgotha,” but as with so many Native thoughts, the record is silent about Squanto’s reaction to the scattered bones of his relatives.

Perhaps the most brutal blow of all was the next unexpected turn: Squanto was imprisoned again. A Wampanoag band from Martha’s Vineyard attacked the expedition and captured Squanto, turning him over to Massasoit, the regional headman. Squanto remained unfree until his death a year and a half later.

He would cross the fluid Wampanoag boundary between the living and the dead and embark on the great purgative Catholic journey—reinventing himself for the last time.

Undaunted, Squanto reinvented himself again. In a volatile, high-risk setting, he became a dexterous intermediary between Massasoit’s band and the Pilgrim newcomers while positioning himself to lead a reconstituted Patuxet. But it was not the dangerous political situation that proved fatal: Squanto suffered the same fate as his Patuxet home, succumbing to European disease in November 1622.

Even in death Squanto remained a survivor. In William Bradford’s recounting of Squanto’s last words—to pray for him “that he might go to the Englishmen’s God in Heaven”—I hear Squanto saying that his journey was not done. He would cross the fluid Wampanoag boundary between the living and the dead and embark on the great purgative Catholic journey—reinventing himself for the last time.

Yet on Earth Squanto remains trapped by the image we have invented for him. In the romanticized Thanksgiving narrative that began developing a century and a half after the actual feast, Squanto has been reduced to a two-dimensional supporting character that appears only to the degree he selflessly gifts sovereignty over Native land. Understandably, this stereotype makes some Natives suspicious, seeing Squanto as a Benedict Arnold-type traitor.

Squanto deserves more or, at the very least, a fair reading. Squanto was nothing if not a survivor. Despite his kidnapping and permanent homelessness, he clawed his way back from exile and, in the process, became America’s first truly global citizen. The world before the collision of continents was not coming back, but Squanto did.

Thanksgiving and we who celebrate it need the real Squanto. The value of his witness does not come from a kind of purity or righteousness that he found himself on the right side of history. Rather, it stems from his tenaciousness in the face of the intractable mess in which we all find ourselves.

Squanto’s tenacity and cultural fluidity is a resource for us all, whether Native struggling to recover what was lost or settler struggling to honor our covenants and live in right relationship.

In the societies that emerged out of this collision some benefit or suffer more than others—a lot more, in some cases—but we are all trapped with no single easy answer other than Squanto’s answer: to never give in, to reinvent again and again no matter how many times the rug is pulled out from under us.

Squanto’s tenacity and cultural fluidity is a resource for us all, whether Native struggling to recover what was lost or settler struggling to honor our covenants and live in right relationship.

Catholicism was a crucial ingredient in Squanto’s resiliency, the regenerative principle that gave spiritual power to sustain the disjunction of being a global citizen in a world forever turned upside down.

What Ojibwe author David Treuer said of Nicholas Black Elk’s Catholicism rings true of Squanto: “Black Elk was determined to live and to adapt. That doesn’t make him less of an Indian, as I see it; it makes him more of one.”

Lord, Spirit of the Dead-Resurrected, give us the resiliency of Squanto. May we have his courage to live and adapt in a world forever turned upside down.

This article is based on the scholarship of Paula Peters, Joseph Bruchac, Neal Salisbury, Kathleen J. Bragdon, and Daniel Silverman. Please see their work for a fuller portrait of Squanto, the Wampanoag, and the first Thanksgiving.