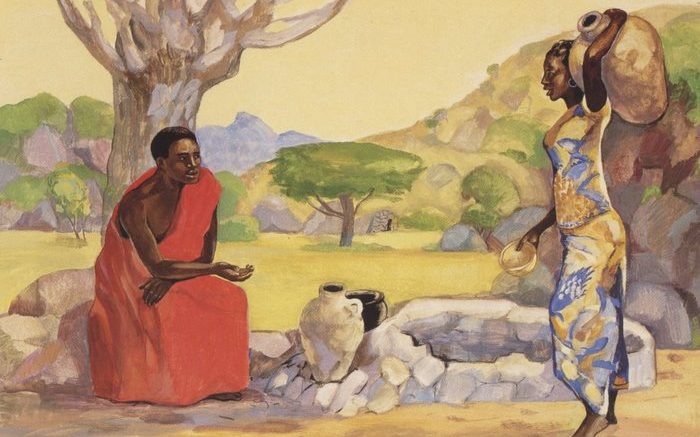 A natural overlap exists between the movement Jesus founded in first-century Palestine and contemporary feminist thought: Both are concerned with loving all people equally.

Feminism is a belief in the equality of all and the intersection of identities. Its popular political movements ask us to look at society and point out where groups are struggling to secure rights, representation, and voice. In doing so, feminism strives to lift those voices so they are heard as often and as loudly as the voices that have been consistent in representation and decision-making.

Through his preaching and ministry, Jesus promotes a similar message of equality. Jesus interacts with and relies on both women and men—such as Mary, Martha, Peter, and John—showing that women are of equal value and spiritual depth as men.

When Jesus meets the Samaritan woman by the well, he offers counsel regarding her vocation and doubts. She is regarded as a person on the margins not only because she is a woman, but also because a significant ethnic divide exists between the Samaritan and Jewish peoples (John 4:4–26).

Martha also receives spiritual direction from Jesus. When she runs to Jesus in grief and questions why he hasn’t saved her brother from death, he reassures her, and her doubts flee. The conversation ends with her statement of belief that he is the Messiah (John 11).

Jesus interacts with and relies on both women and men—such as Mary, Martha, Peter, and John— showing that women are of equal value and spiritual depth as men.

When a poor woman anoints Jesus at Bethany, he defends her against others’ judgmental remarks and dismissiveness, acknowledging the dignity and agency of people from all socioeconomic levels (Mark 14:3–9).

The covenant God made with us is based on right relationship with God, oneself, and ones’ neighbors—acting in ways that uphold the dignity and worth of all people.

Jesus illustrates the notion of right relationship with the parable of the lost sheep (Luke 15:3–7), in which the shepherd leaves the herd (majority) to find one lost sheep (at the margins). The herd is content and safe to wait for his return. The story shows that each person and voice is vital to the group. No one should be abandoned because they aren’t in the majority.

Jesus’ followers today are called to the same inclusive thoughts and actions that he demonstrated in his lifetime.

The lifting up of oppressed voices is found consistently in Jesus’ teaching. Jesus’ followers today are called to the same inclusive thoughts and actions that he demonstrated in his lifetime.

Likewise, feminism claims that the differences among people shouldn’t interfere with how they are treated. It lifts the narratives that have been missing from the norm to show that all experiences have value and are worthy of inclusion.

Philosophical feminism wasn’t established in Jesus’ time, but his egalitarian ministry shows he acted and taught in ways we could consider feminist today.

This article also appears in the October issue of U.S. Catholic (Vol. 85, No. 10, pages 49). Click here to subscribe to the magazine.

Image: Jesus Mafa, “Jesus and the Samaritan Woman,” from Art in the Christian Tradition, a project of the Vanderbilt Divinity Library.

TagsGlad You Asked Scripture Theology Women in the church

Bernadette Raspante is a high school religion teacher in Chicago.