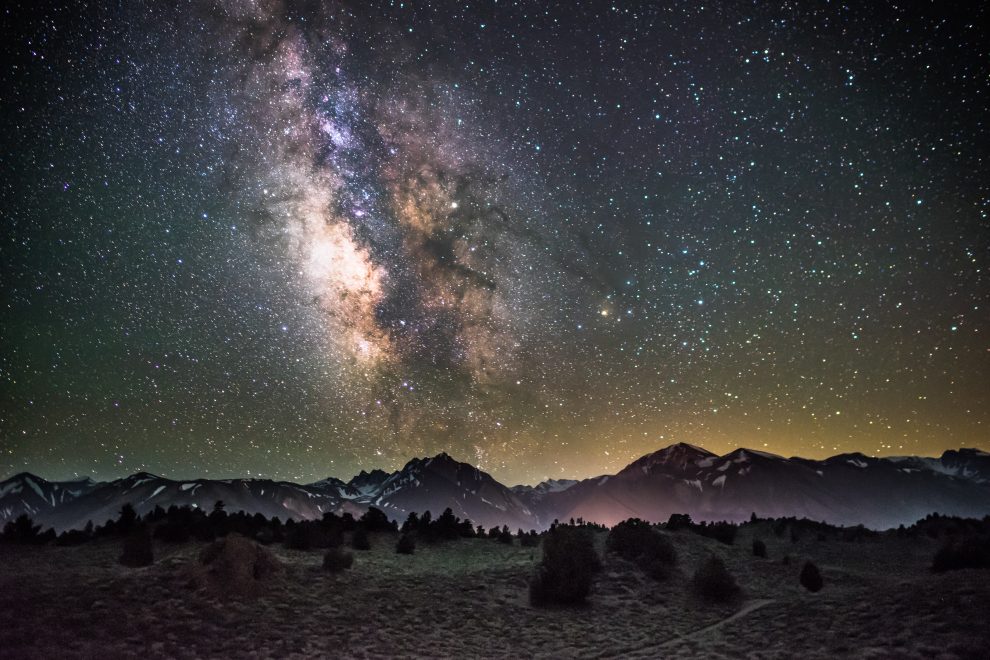 I love to look at the stars. On the night leading into my birthday last year, there was a lunar eclipse and a blood moon. I opened a window in my living room—it was too cold to sit outside—and laid down on the floor. Watching the moon turn almost black then blood red, I lay there for longer than an hour, enamored by the movements of the sky and by the one who set them into motion. Stargazing for me that night was an act of prayer.

The beauty of the heavens moved me to praise God. This is often how I feel when staring into the night sky. I see those lights: We’re told that so many of them burned out millennia ago and yet their light continues to reach us. But I’m not moved by just the beauty of their light. Their movements, the cosmic dance, also lead me to praise God. This must be part of what the psalmist meant when he said, “The heavens are telling the glory of God” (Ps. 19:1). Never was this more evident to me than on the night of the blood moon.

Foreordained since the creation of our galaxy, the Earth passed between the sun and moon that night. I nearly wept as I reflected on the God who made these planets, these once-called gods of the night sky.

Before the discoveries of Copernicus, Galileo, and Kepler, Earth was believed to be the center of the cosmos. The heavens were believed to move in perfect circles, unchanging except in their constant motion. On Earth things were always changing, and change meant the possibility of sin. The planets, in their perfection, were believed to be moved through their courses by angelic intelligences. This is why the people of the ancient world and the Middle Ages called the celestial expanse the heavens. They would watch the sky, seeing in its movements the beauty and love of God. For medieval authors such as Boethius and Dante, the love of God moved “the sun and the other stars” (The Divine Comedy, “Paradiso”).

The first discoverers of heliocentrism were not attempting to disenchant the cosmos. Rather, they wanted to come to accurate, but often still prayerful, understandings of the universe. Still, as the sciences became unhooked from the spiritual realities behind them, the cosmos or “heavens” became known simply as space.

C. S. Lewis was a great lover of stargazing and of the medieval model of the universe. In his science fiction series, The Space Trilogy, Lewis presents the medieval cosmos with a modern twist.

We are made of stardust, and the fate of the planets is bound up in us because we are bound up in Christ.

Since the books take place in the modern world, they present a universe where the sun is the center of our solar system and the Earth is one of the planets that wanders in the heavens. Yet as Elwin Ransom, a protagonist in the first two novels, is first traveling through space, he reflects that “the very name ‘Space’ seemed a blasphemous libel for this empyrean ocean of radiance in which they swam. . . . Older thinkers had been wiser when they named it simply the heavens—the heavens which declared the glory” (Out of the Silent Planet, Scribner). Passages such as this one have me sitting outside, often with an app, to discover the stars and planets as they move across the night sky.

One thing that has profoundly helped me stargaze as prayer is the ability to recognize the planets, even if I’m not always certain which is which. In ancient belief these gods-turned-angels also represented archetypes, figures, and characters foundational to reality. Thus, when I see Jupiter in the summer or Venus on an autumnal morning, I think of the jovial and venereal characters. I think of kingliness and jollity, feasting and festivals, love and beauty. I am reminded that these things, too, come from God.

The planets remind me that the whole of the universe is connected. We are made of stardust, and the fate of the planets is bound up in us because we are bound up in Christ. Among the sheer magnitude of the cosmos—giant gas planets such as Jupiter and Saturn, novae and supernovae exploding and reforming, all the nebulae, galaxies, and black holes—here we are on our seemingly insignificant planet, the home of God-become-human. This thought moves me: For whatever reason, whatever else might be happening in the universe, God became human here on planet Earth.

Much of how medieval society understood the cosmos has since been disproven. But its approach to the cosmos and the way Lewis mimics it in his fiction inspire me to pray. I look up at the night sky and see the beauty and wonder of the universe. I am moved, always, when gazing upon the stars. I give thanks to the God who “determines the number of the stars” and “gives to all of them their names” (Ps. 147:4).

All things exist for a reason—the chief of which is to give praise to God.

I think on the fact that we are made of stardust and that the stars themselves, along with everything else in creation, have been united to Christ in the incarnation, that all things exist for a reason—the chief of which is to give praise to God. I wonder too about the future, not because I think the stars can tell me what is to come, but because to look on their vastness and innumerability is to see an analogy for the eternity that God intends to share with us.

I am left to consider too the Earth itself, for the stars and planets exist, in part, to give light and knowledge. God said, “Let them be lights in the dome of the sky to give light upon the earth” (Gen. 1:15). Their light brings us to the one who is the light of the world, the one in whom all other lights participate and receive their radiance. After all, Christ calls himself the “morning star” (Rev. 22:16).