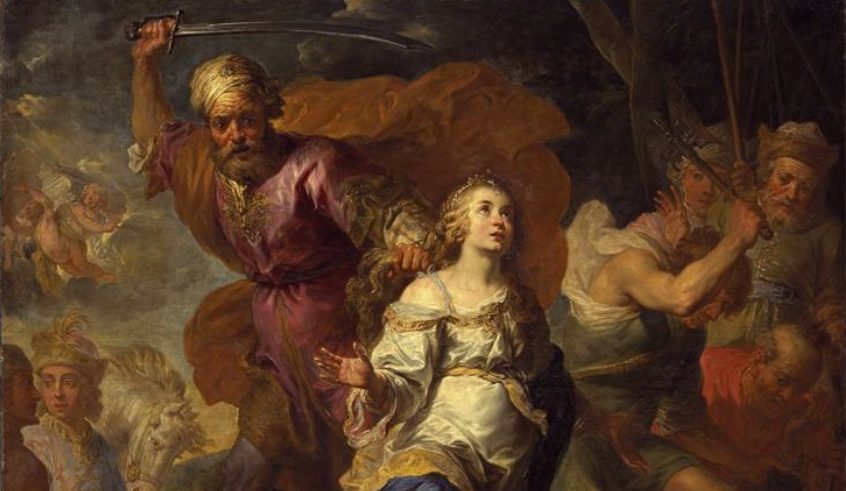 Years ago, not long after I graduated from college, my mother gifted me an assortment of patron saint medals that had belonged to my grandmother. As I fingered through the darkening silver disks, each the size of my pinky nail, the saints’ names were familiar—Christopher, Joseph, Teresa—except for one. “Saint Dymphna, pray for us,” read the print above a tiny figure, crowned and brandishing a sword.

For a long time, I wore a pendant crafted from those medals around my neck. Somewhere along the line, a friend, noticing my necklace, mentioned that people pray to St. Dymphna for help with mental health problems. I put the pendant away for safekeeping when the grabby hands of my babies made jewelry inadvisable, but I remembered what my friend had said.

Recently, after a close family member began suffering paralyzing bouts of anxiety, I began making my own petitions to St. Dymphna. Now, in the harried emotional climate of modern-day America, I figure most of us could use a heavenly advocate who deals in mental unrest.

The earliest historical records pertaining to St. Dymphna, virgin and martyr, date to the mid-13th century and are based on longstanding oral tradition. Legend holds that Dymphna was an Irish princess, born to a pagan father and a Christian mother sometime in the seventh century. Renowned for her beauty, she was baptized and educated as a Christian and as a young woman made a vow of chastity out of devotion to her faith.

When Dymphna was 15, her mother died. Her father, overcome with grief, saw in his daughter the near image of his deceased wife. He became obsessed with pursuing an incestuous marriage with her, but Dymphna refused to break her religious vows. She fled to Belgium with her confessor priest and also, quirkily, the court jester and his wife. They settled in the town of Geel, where the young woman became well-known among locals for her Christian virtue and works of mercy.

Unfortunately, the pagan king’s mad desire for his daughter was further inflamed by his daughter’s furtive flight. He sent forth courtiers to seek her out on the continent. When they returned to report her presence in Geel, the king sailed there himself to collect her and force her hand in marriage. A confrontation ensued, and as Dymphna was steadfast in her refusal, the king beheaded her where she stood.

So far Dymphna’s tale resembles that of certain virgins martyred in ancient Rome, such as St. Agatha and St. Cecilia or the more recent St. Maria Goretti of Italy. What does a saint who died defending her chastity have to do with mental illness? Here lies the part of the story where I see real glimmers of grace around this ancient devotional tradition.

In the Middle Ages, many mentally ill people were left to wander the streets as social pariahs. (Unfortunately, the same is often still true in our current, more “enlightened” era. At least a quarter of those suffering homelessness in the United States are reported to have a mental illness.) The legend of St. Dymphna goes on to recount that the night after her death, a small band of five such wanderers slept upon the place where she died. They awakened the next morning cured of their afflictions. The story of their recoveries spread to neighboring villages and attracted pilgrims, many of whom also experienced miraculous healings.

By the time Dymphna was canonized in 1247, Geel had become a popular destination for people seeking relief from mental ailments, and the infirmaries built for them were overflowing. Many townspeople responded by taking afflicted pilgrims into their homes, where they sometimes stayed for years or even decades. In the centuries since, thousands of families have fostered close relationships with their unconventional housemates, sharing meals and encouraging intergenerational play.

Astoundingly, this custom persists even today and has been widely studied as a model of “community recovery” for conditions ranging from intellectual disabilities to autism and schizophrenia. Host families have no special training in psychology or social work and refer to their guests as boarders rather than patients. This radical incorporation of people with mental illnesses and disabilities into community life has proved to have an astonishing rate of success in treating recalcitrant psychiatric conditions.

Jackie Goldstein, psychologist and researcher of the Geelan model of mental health care, reports that “in Geel, if a stigma [on mental health] exists at all, it is a ‘positive stigma.’ Since the mentally ill have been a part of town life for so many centuries, they’re welcomed and even nurtured by the entire community.”

Here in America, on the other hand, even as we continually complain about our through-the-roof stress levels, we push the psychologically fragile to the margins of our culture. People with cognitive troubles or mental illness are often stigmatized and made to feel unwelcome in public places. Even those of us without serious mental health issues feel pressure to hide our anxieties and weaknesses. Our social media profiles broadcast images of success and ease, leaving everyone feeling like they don’t measure up.

In Wim Wenders’ 2018 film, Pope Francis: A Man of His Word, we hear the pontiff address the draining nature of life in the modern world. “We live with the accelerator down from morning to night. This ruins mental health, spiritual health and physical health. More so: it affects and destroys the family. And therefore society,” the pope says.

I don’t intend this quote to glibly equate serious mental illness with the feelings of unrest brought on by daily stress. But I think it’s worth pointing out that our collective mental health is under assault by a barrage of factors—addiction, overwork, a decline in meaningful human interaction, and over-reliance on technology among them.

Traditionally, St. Dymphna is portrayed with her sword pinning a demon to the ground at her feet, an illustration of her title “demon slayer.” In ages past she would have been invoked to conquer the literal demons thought to possess those with mental illnesses. I like to think that her intercession could be equally powerful in slaying the metaphorical demons that currently plague our mental well-being.

Scholars may raise an eyebrow at the historical plausibility of St. Dymphna’s life story, but she carries an undeniable legacy of healing. These days I keep my St. Dymphna medal in my pocket as a reminder to pray not only for the well-being of my family, but also for the very sanity of our culture.