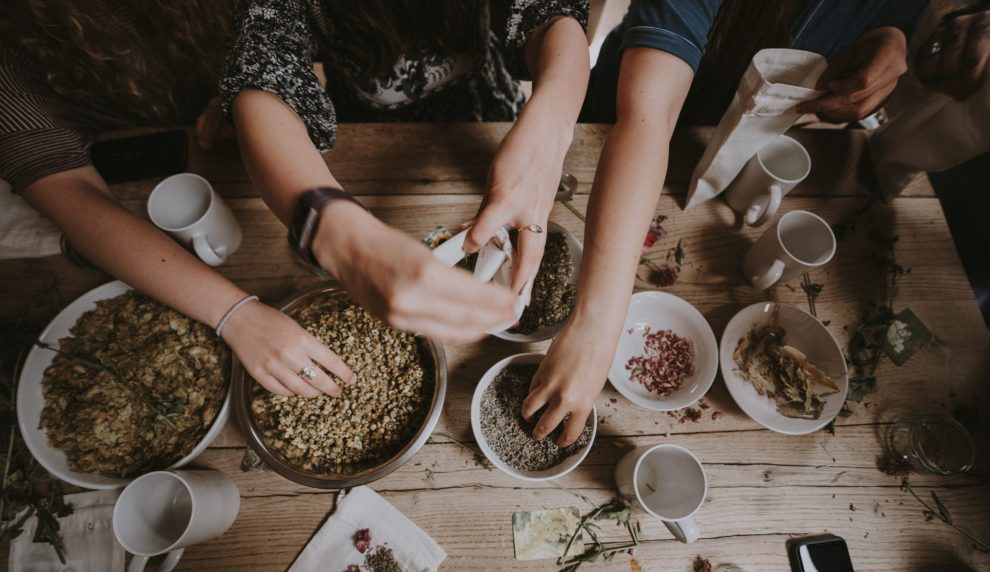 They crowd together in the narrow kitchen—septuagenarians and octogenarians, Millennials and Generation Zs—preparing lunch for guests in an El Paso house of hospitality known as Casa Vides. The three Irish Catholic sisters and four lay volunteers currently cohabitating in this old, two-story building share one mission: to serve immigrant families. Yet every morning they gather upstairs in the cramped dwelling for reflection, regardless of their religious affiliation, as Christians, non-Christians, and “Nones” alike.

This type of communal living may seem unusual for Catholic sisters, but it’s only one example of an unfolding phenomenon in “the Borderland.” From refugee shelters to private residences, women religious are living with laypeople and sisters of other congregations in ways that have expanded their concept of living in community.

“The poor and the immigrants are throwing us together,” says Sister Beatrice Donnellan, a Sister of the Holy Spirit and Mary Immaculate, who has lived at Casa Vides for nearly five years. Despite living most of her 80+ years in the United States, her Irish brogue comes through as she speaks of the “tremendous collaboration” among the volunteers from the community at large and from elsewhere.

Well before national news coverage of the plight of immigrant families drew people of all ages to volunteer in El Paso, a growing number of young volunteers served alongside the sisters. Their presence gives hope to elder sisters like Sister of St. Francis of Philadelphia Caroline Sweeney, who also lives at Casa Vides. Like Donnellan, Sweeney came to the United States from Ireland in the 1960s to complete her religious formation. “I never had considered such collaboration when I made my first vows,” Sweeney says. “I thought we [Catholic sisters] were a stronghold.”

But as the number of sisters dwindled, she found herself wondering, “Who will do the work now?” Today, she sees young people stepping up. Whether through border awareness experiences, which she says “opens their souls to the work that needs to be done,” or yearlong commitments at border-based nonprofits like Annunciation House and the Loretto Volunteers Program, Sweeney is impressed by their solidarity with the sisters.

“Now, all kinds of commitments, short-term and temporary, are possible. It’s not just limited to Catholic communities or even only Christian communities,” adds Donnellan. “It broadens my vision for the future of what religious life might be.”

This coming together to live out the gospel amid dissolving boundaries is a model evident for the church today, the sisters say. They share living space, even bedrooms, with laypeople, further decreasing any divisions among them: geographically, religiously, and culturally. And, as the sisters regularly cross the El Paso-Juárez border to serve, they find themselves literally living that metaphor. In Sweeney’s view, “We’re collapsing all those walls. They’re gone!”

As the number of women joining religious congregations significantly decreases from its former robust years, younger sisters, like Sister of Charity of Cincinnati Annie Klapheke, aren’t concerned. On the contrary, 34-year-old Klapheke finds the idea of smaller, intimate communities more attractive. While in formation, she lived in intentional community with a few sisters and other “guests” in Anthony, New Mexico.

“Religious life is what is needed at the time,” Klapheke says. Believing that sisters will always be at the margins responding to where the most needs are, she sees their role as the “little bit of leaven that can help inspire or inject a bit of gospel or charism into the communities.”

From that perspective, sisters dedicated to living the gospel—day after day, year after year—in these border communities seem to have inoculated laypeople to carry on their charisms. Whether the sisters are present or not, stepping into the site of any ministry here reveals a cadre of laypeople at work.

As Sister of St. Francis of Dubuque, Iowa, Terri Rodela explains, “In El Paso, people are very much in tune with what we’re about. In our own community of sisters, we talk about what our legacy is. The people of El Paso live that message.” Rodela personally experienced this type of communal living when the Sisters of St. Joseph offered room and board in their El Paso home to sisters and lay volunteers accompanying migrants and refugees. From Rodela’s view, “the future is laity and religious working together.”

“El Paso is a unique place in that so many are involved,” agrees Sister of Charity Peggy Deneweth, who lives in intentional community at Casa de Caridad. “It’s more intimate here. You have that support of each other, knowing we’re all doing our own little part. Together, it works.”

But that solidarity is still in process, according to Donnellan. “When I think about the future of religious life, I see that we’re managing to break walls down like crazy, even in the church. And we need to break down even more.”

Image: by Annie Spratt on Unsplash

TagsImmigration Women in the church Women religious Works of mercy