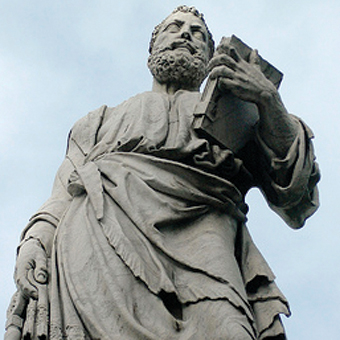 Anyone who imagines Jesus has no stake in the debate about our treatment of the stranger at our borders needs to attend more Bible study. One of his most beloved parables concerns a good Samaritan: unwelcome in Israelite territory because he wasn’t “one of them,” a descendent of despised transplants who didn’t belong. The Samaritan alone shows compassion for an injured Israelite who, if he’d been in full vigor, might well have cursed him. Jesus pronounces the Samaritan a true neighbor.

Gospel respect for the outsider is visible much earlier. Matthew’s gospel account begins when a troop of guys from way out of town reverence a newborn king while local authorities plot to kill him. From the start of his ministry, Jesus heals and teaches folks who stream toward him from the Decapolis, 10 cities that include nine on the wrong side of the border. Syrians quickly place their trust in him. A Syrophoenician woman with a sick daughter wrangles from Jesus both a cure and his admiration.

In his first and only teaching in Nazareth, Jesus reflects how prophecy often finds a home among foreigners like the widow of Zarephath and Naaman the Syrian. The same good word, delivered locally, is spat out. As if on cue, the citizens of Nazareth run him out of town. Meanwhile, a Samaritan woman at a well becomes an early successful apostle of the gospel. Later at the crucifixion, a Roman centurion is the first on-site to testify, “Truly this man was God’s Son!” (Matt. 27:54).

Another centurion—not simply a foreigner but an enemy—seeks healing for his servant and shows such confidence in the authority of Jesus that Jesus declares, “Truly I tell you, in no one in Israel have I found such faith. I tell you, many will come from east and west and will eat with Abraham and Isaac and Jacob in the kingdom of heaven” (Matt. 8:10–11). Jesus exorcises Gadarene demoniacs and heals Samaritan lepers with the same immediacy as homegrown sufferers of similar afflictions.

The bottom line: Divine compassion isn’t limited to one nation or religious affiliation. Just as Jesus won’t limit his definition of family to blood relations, he also won’t draw a line between his love and those in need of it, no matter who they are.

In the parable of the judgment of nations, Jesus never asks, “Where are you from?” but only “What have you done?” Those who welcome the stranger are among those who step into eternal life.

The same Jesus who receives the foreigner with as much welcome and compassion as his fellow citizens likewise elicits from these strangers an even more fervent display of trust in his word. Descended himself from a long line of immigrants and refugees—from Adam and Eve through Abraham, Moses, all the way to Mary and Joseph forced to flee into Egypt—Jesus made hospitality to the outsider a pillar of his teaching and ministry.