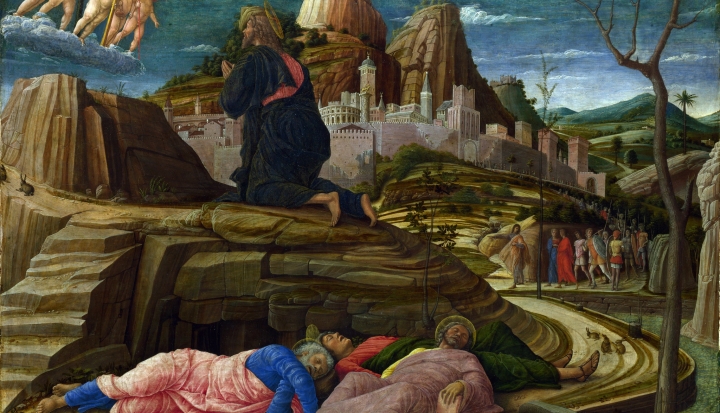 Jesus came with them to Gethsemane and said to his disciples, “Sit here while I go over there and pray.” He took along Peter and the two sons of Zebedee, and began to feel sorrow and distress. Then he said to them. “My soul is sorrowful even to death. Remain here and keep watch with me.” He advanced a little and feel prostrate in prayer, saying, “My Father, if it is possible, let this cup pass from me; yet, not as I will, but as you will.”

When he returned to his disciples he found them asleep. He said to Peter, “So you could not keep watch with me for one hour? Watch and pray that you may not undergo the test. The spirit is willing, but the flesh is weak.” Withdrawing a second time, he prayed again, “My Father, if it is not possible that this cup pass without my drinking it, your will be done!” Then he returned once more and found them asleep. He left them and withdrew again and prayed a third time, saying the same thing again.

Then he returned to his disciples and said to them, “Are you still sleeping and taking your rest? Behold, the hour is at hand when the Son of Man is to be handed over to sinners. Get up, let us go. Look, my betrayer is at hand!”

In a world of hurt

When we picture Jesus praying, “Let this cup pass from me” in the garden of Gethsemane, we recognize his humanity. Just hours before he was to be arrested and crucified, Jesus pleaded to God, not just once but three times, to let the suffering pass him by. Yet each time he finished his prayer with the words, “Yet, not as I will, but as you will.”

In this gospel story Jesus teaches us how to suffer—we learn that wrapped in any prayer asking God to take away the suffering must be the prayer to accept God’s will.

God will guide us to pull goodness from suffering

Martha, mother of three who lost both her mother and mother-in-law in the past year, notes that while suffering is part of an imperfect world, it is not brought on by God.

“I believe that in every case God would be cheering for the suffering to pass,” Martha says. “Just as it pains us to watch our loved ones or even people we don’t know personally suffer, so, too, it pains God to have to watch humankind endure suffering. God wants goodness for us, and always God delights in our ‘resurrections.’”

Jesus’ suffering and death came at the hands of others. The failure of Pontius Pilate and others to protect him have parallels in every age. The innocent often die because of the sins of others.

The Sandy Hook Elementary School massacre took place the day before Marquette University’s winter commencement in December 2012. The country was reeling with grief over the 26 gunned down at the elementary school, including 20 first graders.

During the homily at the Baccalaureate Mass at the Church of the Gesu in Milwaukee, Jesuit Father Scott Pilarz addressed the question of suffering and evil. “Despite tragedy, and despite the world’s gritty realities, we cling to the conviction that God has been and God always will come into the world with good news for God’s people,” he said. “Yesterday might tempt us to believe that evil has the last word. But here at Marquette, huddled in this church tonight, we say no to that temptation.”

Pilarz went on to explain that to be a believer in God is to organize our understanding of the world differently from the way we otherwise would. In the face of tragedy, he said, we must grieve, criticize when necessary, and then “we must . . . help each other to discern pockets of peace and places from whence hope may be plausibly expected.”

Alone in the garden, in agony

We usually wince at the sleeping disciples in the scripture story. As Jesus suffers, his friends are oblivious. This rings true to many people who suffer quietly.

“My friends do not know that my wife is an alcoholics and struggles with depression,” says Curt (not his real name), married 17 years with three children. “They think we are the perfect married couple, but we are not. I have suffered tremendously because of my wife’s illnesses, and I have suffered alone. It has taught me that other people may have their own private pain that I don’t know about, either. Sometimes it feels like my friends and family are asleep, because they don’t notice anything is wrong.”

How to talk about suffering

When talking to children about the suffering of others, parents often struggle to tell their children the truth while at the same time protecting their innocence and assuring them of their safety. Jenna and Eric, parents of two children, 10 and 7, say their approach to suffering and tragedy has served their family well both in cases of personal pain, such as when Jenna’s mother died, and in cases of public tragedy, such as the Sandy Hook killings.

“We are honest. We are brief. We are open to questions. We show that we are sad and let them know it’s OK to be said, but we don’t openly grieve in front of them most of the time,” Jenna says. “We let our children know they can come to us later with questions or concerns, and if they do we hug them and answer them as honestly as we can.”

This article was originally published in the March 2013 issue of At Home with our Faith.