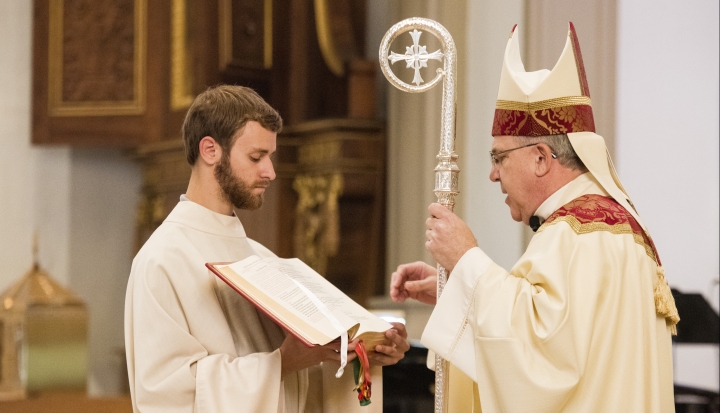 When I glanced ahead in my missal during the entrance hymn I had to resist the impulse to cut out right then. The first reading was Genesis 2:18­–24. You know the story: Adam needed a “helper,” so God created Eve. “This one shall be called Woman,” the scripture says, “for out of Man this one was taken.” I was near the end of a long yet always toxic marriage, making this passage perhaps especially difficult to hear. But who—man, woman, or adolescent—hasn’t squirmed in the pew upon hearing this reading at a Sunday Mass or, worse yet, during a wedding?

It helped that I was pursuing a divorce, and eventually annulment, with the full support of my parish priest, who told me “there are a lot of myths about what the church teaches about marriage.” I’ll say. But I wouldn’t exactly call them myths when they are read from the pulpit, selected from among so many possible teachings in the Bible, and gathered in the official Lectionary for Mass, the guide to sacramental reading endorsed by the Vatican.

Although some Mass parts and prayers have been revised, theologians, scriptural scholars, laity, and clergy alike have been arguing for years that the lectionary needs updating to be more gender inclusive. In the fall of 2017, in his Magnum Principium (“The Great Principle”), Pope Francis announced that translations of liturgical texts would be turned over to local bishops rather than overseen by the Vatican, a significant pivot after a period commentators called the “Liturgy Wars.” Those who advocate updating the lectionary hope that this shift will provide the opportunity to correct the mixed messages given to women, girls, and even men.

Fortunately for me the young priest who stepped to the ambo after the Genesis reading was a skilled homilist. I took solace in his message that only in a truly sacramental marriage, one characterized by mutual respect, equality, and selfless love, can the “they become one flesh” (Gen. 2:24).

I knew my marriage was never sacramental, due to the presence of addiction from the start and a decided lack of those qualities. However, it seems a significant lectionary update could make the job of all pastoral counselors a lot easier. In some liturgical years, for example, the second reading for the Feast of the Holy Family, presented as the model of a Christian family, includes Colossians 3:18: “Wives, be subject to your husbands.” While the Vatican gave U.S. bishops permission to omit from public reading any scriptures admonishing women to be submissive (there are several) as long ago as 1992, many clergy and others are likely unaware of that change. While many scriptural verses are routinely skipped in lectionary notations, this verse from Colossians is not.

“Over its 2,000-year history, the Catholic liturgy has constantly changed in response to new situations and cultures,” wrote Jesuit Father Thomas Reese in a 2017 National Catholic Reporter article where he urged bishop’s conferences to propose significant changes and updates to the lectionary on a frequent basis, in the manner of improvements made to computer software. “Allowing creativity and experimentation is the best way to prepare for liturgical reform.”

The Lectionary for Mass is part of the Roman Missal, Third Edition (which also includes the Sacramentary, texts and prayers spoken at the altar). The process for adopting texts usually involves translation and then approval by local councils of bishops and “confirmation” of that approval by the Vatican’s Congregation for Divine Worship and Discipline of the Sacraments. In the United States the USCCB’s Committee on Divine Worship oversees the preparation and approval of liturgical books and texts. In 2016, for example, this committee issued a Lectionary Mass Supplement with updates to reflect corrections and new canonizations, as well as new liturgical reading options for weddings and votive Masses, Pentecost, and a new Day of Prayer for Unborn Children. Several new memorials for saints were added, too, seven recognizing women and nine men.

The timing, frequency, and content of updates to the lectionary fall to bishop councils. At the end of 2018 the bishops of England and Wales approved a different Bible translation for their lectionary. Of course, what’s in and what’s out of a lectionary can become highly political, with some arguing on behalf of “difficult” readings that condemn homosexuality or demand stricter rules for partaking of the Eucharist or others calling for gender inclusive language.

In the past 50 years the lectionary for the Mass has been significantly updated only four times. In 1965 the Second Vatican Council recognized the need to encourage lay participation and adapt the liturgy to local cultures: They translated the Latin text to the vernacular and turned the priest to face the congregation. In 1969 Mass parts such as the introductory rite and kiss of peace were revised and, most significantly, the readings for both Sundays and weekdays were chosen to expose Mass-goers to a much richer selection of scripture. In 1998 the International Commission on English in the Liturgy (ICEL), with the approval of all English-speaking bishops’ conferences, prepared a translation in part to include more inclusive, less gendered language. However, it was never approved by the Vatican. Most recently, what is known as the “Reform of the Reform” in 2011 not only ignored the ICEL translation but went back to a more literal translation from Latin, resulting in Mass parts and prayers that are still widely criticized as awkward and confusing by laity and clergy alike.

When it comes to scriptural readings, most pew missals contain 1969-era selections. The Revised Lectionary is the only English-language text approved for dioceses in the United States. It is arranged in two cycles, one for Sundays and one for weekdays. Sunday Mass readings cycle every three years, while weekday readings cycle every two years. Other readings for saints’ feast days and special seasons and rituals (such as weddings and funerals) are also proscribed. On Sundays, the first reading, usually from the Old Testament, reflects important themes from the gospel reading. The second reading is usually from one of the epistles, letters written to early church communities. The gospels cycle between Matthew one year, then Mark and John, and lastly Luke, with John being read during the Easter season.

“The widely held assumption has been that the lectionary faithfully presents the essence of the Bible, with the omission of only a few troubling or gory passages,” wrote Benedictine Sister Rose Fox in the journal Liturgy, published by the Archdiocese of Chicago. “This satisfying assumption has recently been controverted by shocking evidence to the contrary.”

According to Fox, “a disproportionate number of passages about women . . . are omitted altogether, are relegated to weekdays . . . or designated as optional.” In an exhaustive study titled “Women in the Bible and the Lectionary” she also found many of the selected readings reinforced the perceived weakness or subservient roles of women. Even the gender balance of approved saints’ solemnities, feasts, and memorials on the official liturgical calendar is skewed: 154 male saints compared to just 34 female ones.

Catholic laity are notoriously less familiar than other Christians with the whole of the Bible,, because we are unlikely to read beyond the USCCB-sanctioned daily readings heard in Mass and published in countless devotionals and Bible study apps. So it was curiosity and laziness that prompted me recently to explore the excised passages in a daily reading of Titus 2:1–8, 11–14. In verses 1–8 I found wives instructed “to be self-controlled, chaste, good managers of the household,” and “submissive to their husbands.” Was it irony or something worse, I wondered, when I discovered lectionary authors included that passage but omitted verses 9–10, which said slaves must be “submissive to their masters”?

I knew nothing until recently of the many women included in both testaments, because they are left out of the lectionary entirely. Midwives Shiphrah and Puah, who stood up to a pharaoh and refused to kill boy children, can be found in Exodus 1:15–22, but that scripture cannot be found in the lectionary. Who knew there were prophets named Deborah and Huldah, and a woman deacon, Phoebe, mentioned in Romans, Chapter 2 and elsewhere, as well as many other strong and faithful females? Ruth, Esther and Judith fill entire books of the Bible with their wisdom and example, yet only a few passage about them show up in the lectionary, always as weekday or optional readings.

To be fair, Fox points out that many stories involving men are likewise left out of the lectionary. “But given the already limited focus on women in the Bible,” she said, “it would seem that lectionary editors would begin to choose to be more inclusive of women—if they wanted the liturgy to speak to women.”

I remember being told by a woman religious in my parochial school that the line “for us men and our salvation” in the Nicene Creed we recite every Mass meant “huMANity.” I swallowed that when I was 10, sure, but after 40 years listening to readings and prayers in Mass about being submissive, obedient, and forgiving at all costs, I came to believe that being a faithful female Catholic was synonymous with being a suffering wife and mother. Those old images don’t work for me anymore.

So in lieu of an extensive update to the lectionary in the near future, Fox recommends meliorations well within the guidelines of the Committee on Divine Worship. Those include celebrating all optional memorials of women saints throughout the year, preaching on full biblical texts, paying attention to omitted verses, and using scriptural passages about women neglected by the lectionary in other occasions of parish life, such as commissioning of ministers, communal services, and parish meetings.

Thanks to that 2016 lectionary supplement, my Millennial niece and her groom had choices beyond the Genesis reading for their recent nuptial Mass. The celebrant was excused from deconstructing an outdated allegory. Family and friends—men, women, married, single, divorced, separated—did not squirm in the pews. Instead, on that joyful day we heard scripture telling us that equal partners in marriage can cultivate a love large enough to be shared with those in need. The new option, from Hebrews 13, offers a lesson that might well serve the next group of lectionary editors: “Let mutual love continue. Do not neglect to show hospitality to strangers, for by doing that some have entertained angels without knowing it” (Hebrews 13:1–4a, 5–6b). Love that is hospitable to all is holy.

TagsScripture Women in the church