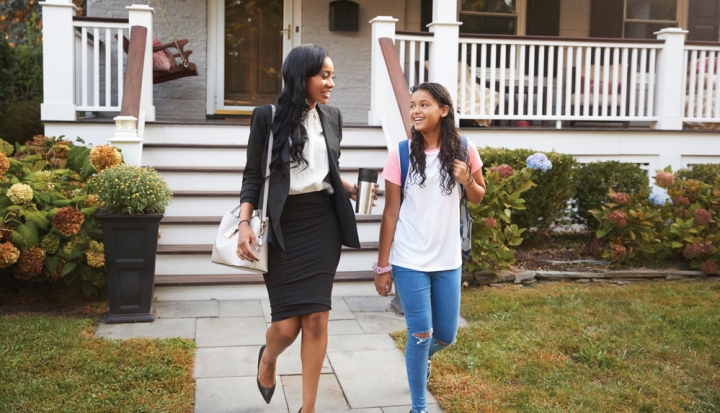 “Havoc” may best describe the lives of many Midwestern families this winter, as Mother Nature brought unrelenting wind, rain, snow, ice, and record-setting chills. For families like mine, balancing professional lives, parenting, and maintaining a household are demanding enough without becoming the object of nature’s merciless torments. Nonetheless, despite all the challenges that the conflicting demands of work and family introduce in our lives, this living on the edge of chaos is exactly what we chose. Most American parents want to work beyond the household, and most are doing so.

Such a narrow balancing act between the demands of work and family, however, raises important questions about which is more important and in which parents should feel more fulfilled.

The tradition of Catholic social teaching provides helpful guidance in clarifying the dignity and importance of both work and family. But the concerns of this tradition and the realities of life for many American parents do not mesh perfectly, particularly for working mothers, caregiving fathers, and couples pursuing the present cultural ideal of negotiated roles between equal partners. As a consequence of the gendered distinctions employed in Catholic social teaching and sometimes reflected in U.S. society, the tradition presents differing messages to men and women about how to seek balance and fulfillment within the realities of work and family.

While it is common knowledge that Catholic teaching places great value on the family, and certain types of families in particular, less well known is the emphasis Catholic social teaching places on the value of work. This discrepancy can lead to the belief that work’s sole or principal function is to support the family. It can also lead to the assumption that finding fulfillment in family life is categorically more important than finding satisfaction in our professional lives. This reduction to a simple hierarchy sells work short. While it is important to acknowledge that, for many, work and family life can be sources of anxiety, toil, and suffering, the Catholic tradition envisions both good work and harmonious family life as important and significant sources of fulfillment.

From Pope Leo XIII’s groundbreaking social encyclical of 1891, Rerum Novarum (On Capital and Labor), to Pope Francis’ 2015 encyclical on the environment, Laudato Si’ (Care for Our Common Home), the church has made the significance of work and support for the rights of workers an ongoing priority. Work, at its best, is both a duty and an opportunity to grow and be shaped as persons. Good work requires effort and creativity. Because of this, it is an important means of expressing our dignity as human persons and deepening our relationship with God and others.

While John Paul II was certainly not one to underestimate the importance of the family, neither was he willing to underestimate work. In his often underappreciated encyclical, Laborem Exercens (On Human Work), Pope John Paul II clearly articulates a Christian vision of good work. In both work and family he saw possibilities for building authentic relationships, expressing and developing oneself as a person, and growing in Christian holiness. While the intrinsic value of work to workers themselves should not be overlooked, work also clearly serves an important role in safeguarding the stability and security of families.

This balance between work and family in Catholic social teaching was made easier by neat and tidy gender roles. Catholic teaching of the early 20th century sought to protect family stability and well-being by advocating for better working conditions for male heads of households. Meanwhile women were instructed quite seriously not to desire participation in the labor force. Instead, women were to remain on their “regal thrones” within the household.

By attending to their domestic duties, women could directly contribute to the good of their families and indirectly to society at large. Both partners were to oversee the religious, moral, and social education of their children, yet wives were reminded of their due subservience to their husbands, owing to the natural order of things. When these duties were embraced, a holy and tranquil family life was to follow.

This ideal was of course never reality for many families. For immigrants and minorities as well as families affected by war and poverty, conditions rarely permitted such serene order. As the century progressed, the ideal itself came under increased social scrutiny as support for civil equality across genders grew. At mid-century, the documents of Vatican II recognized these realities and ushered in support for egalitarian marriage and a more qualified backing of women’s right to participate in the workforce and public life. These developments expanded concern for labor beyond male heads of families to a broader swath of society. Nonetheless, concern that work ought to be humane and fulfilling while supporting conditions conducive to stable family life remained consistent.

Today, according to the Bureau of Labor Statistics, in about half of U.S. two-parent households both parents are employed full-time. Even among the least employed subset of parents, married mothers, almost 70 percent are, by and large, busy with jobs and careers. Driven in part by increasing educational attainment and decreasing wage inequality, the overall portion of women in the labor force is growing and mothers are increasingly becoming primary breadwinners. Single mothers, meanwhile, are employed more often and tend to out-earn their married peers despite often living in low-income households.

And yet, portions of the former ideal family order, where the man works and the woman stays at home, persist in both Catholic teaching and popular culture. Catholic teaching officially considers men and women equal partners in marriage mutually called to love and take responsibility for their family. Nonetheless, women are much more frequently the subject of special concern, particularly regarding career aspirations and the obligations of motherhood.

Women’s work within the home continues to be an area of concern, while Catholic leaders have argued that it ought to be socially recognized, supported, and compensated as a form of labor. The jury is still out on if this support is a disinterested call to recognize the importance of domestic caregiving or a tactic to reinforce outdated gender roles. The first option would be more convincing if Catholic leaders were similarly wary of male work-family conflicts or more sensitive to fathers who may be primary caregivers for young children.

Socially, the story is similar. While Americans support the idea of working women and involved fathers, the wage gap among genders persists, access to affordable quality childcare is limited, generous maternity and paternity leave is hard to come by, and men have largely failed to assume greater responsibilities within the home at anywhere near a rate consistent with women’s greater participation in the workforce.

This is not to discount the proportional leaps in the number of single fathers and fathers who are primary caregivers, but these numbers are tiny compared to mothers. Despite expectations of egalitarian marriages leading to negotiated responsibilities, truly equal distribution of tasks has not been widely reflected in actual marriages. Women overwhelmingly assume the imbalance.

So where should parents today look for fulfillment, given the array of responsibilities and the disparities that exist among parents?

The answer according to Catholic teaching is fairly straightforward . . . for heterosexual men. When addressing fathers, the spheres of work and home life seem neatly divided. As long as balance is maintained, so that career supports a healthy family life and a family life supports success in one’s career, there is no inherent conflict between the two. Fulfillment is noncompetitive but is instead driven by balance and commitment. That is, a man can find fulfillment at home, at work, during leisure or exercise, and in many other arenas of life. None of these are in conflict with each other, and an intentional, well-balanced life ought to lead to fulfillment in many areas of life.

For women, the picture is complicated. In contrast to men, the vocation and social roles of women in Catholic teachings are much more tightly bound up with women’s vocation to motherhood, nurture, and domestic caregiving. Even women who are not mothers are called to exercise this essential motherly dimension of their feminine identity. Consequently, employment is seen as a potential source of conflict for women, as it can compete with or distract from family obligations.

Moreover, women’s involvement in their family is prioritized over and often against their professional aspirations. This doesn’t necessarily mean that women must find greater fulfillment in family than in work, or other spheres of life, but it certainly stacks the deck in that direction, as it sets these responsibilities at odds with one another. Catholic teachings of recent decades have been somewhat attuned to this gendered imbalance, but remain firmly committed to essential gender distinctions.

Again, social reality is not so different. Disparities in hiring practices among men and women are becoming well known. In terms of compensation, men typically benefit from getting married (the marriage bump) while women tend to lose ground (the marriage penalty). Fatherhood remains linked to employment, with relatively few expectations for childcare (e.g., dads “babysitting” their children), while mothers are subject to higher expectations of caregiving and supervising children in public settings. Although most American mothers today work and want to work, social pressures generally reinforce the idea that women are more naturally equipped for parenthood and ought to place greater weight for personal fulfillment on their identity as mothers.

In spite of complications and disparities, the Catholic tradition clearly acknowledges that while the relationships that tie families together are fundamentally important, good work also opens us to the presence of God in our lives. In theory, no sphere of human interaction can possibly be closed to God, who calls us to become more fully ourselves across the various facets of our lives. Nonetheless, the roads to fulfillment are not identically mapped for men and women. Important questions are raised when we consider the extent to which gender ought to define where we seek fulfillment and how Catholic teaching and our social context shapes and misshapes these expectations.