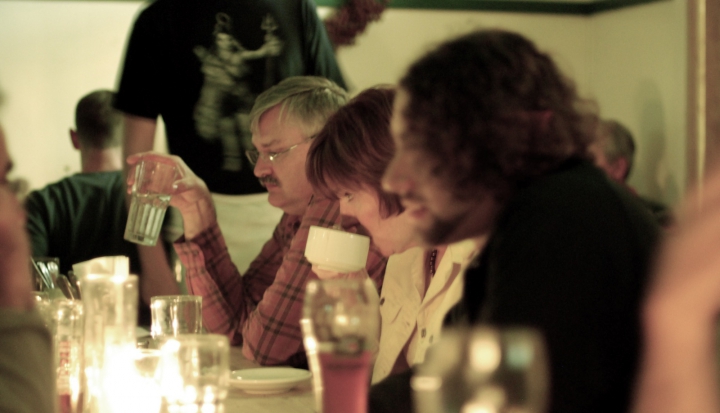 The old adage “Don’t talk politics at the dinner table” never made sense to me. It certainly wasn’t going to fly at the last family Christmas party. My cousin’s husband started a new job in politics. By that I mean he advises the president of the United States on intergovernmental affairs and heads the White House Office of Public Liaison.

It was a safe bet that politics would come up over pulled pork and potato salad—and it did.

Our clan exchanged opinions on policies, bemoaned TV talking heads, and scrolled through pictures of grandkids bowling at the White House alley. Each person was civil and honest. My aunts and uncles listened to one another and asked thoughtful questions. We didn’t have to cast identical ballots to talk about the real implications of real people doing real work in the public square. My family connected on a loving, human level.

The conversation reminded me that there are always people behind politics. Whether it’s the politicians themselves or the citizens who feel the weight of political decisions the most, it is people who live with the day-to-day implications of the political arena. It’s people whose welfare gets cut or whose land is taken after a Senate vote. It’s people who protest and pack the polls and serve our country. To honor the dignity of our fellow human beings—the foundational principle of Catholic social teaching—we have to talk about politics and its impact on people.

Why not start during a family meal?

A major motivation to avoid talking politics at the dinner table is to steer clear of any uncomfortable confrontation that might ensue. “I don’t want to disturb the peace . . .” a well-meaning relative might give as reason for staying quiet. It makes sense. Most people would prefer to stay out of the crossfire. If only we all had that choice.

But Philando Castile didn’t get that choice when a police officer shot him dead in the middle of the street. My friend didn’t get that choice when her boss assaulted her at work. It’s a privilege to be in a position to choose the quiet, nonconfrontational route. Until everyone is afforded that opportunity, I cannot in good conscience stay silent on political matters, even if it means disturbing the dinnertime peace.

There are other practical reasons to steer the conversation to politics. For one, conversations about the weather are dreadful. It takes only one trip through the appetizer bar to establish that it’s getting chilly outside. We all know the local sports team is underachieving and the latest blockbuster hit is decent enough. Skip the small talk. Meaningful conversations about the state of our shared world and what we can do to make it a better place matter. They draw us into deeper relationship with one another. Even if there is disagreement, at least you and your cousin will know each other better.

The world does not need another internet troll. If we are going to talk politics, let’s do so in real time with a flesh-and-blood person within reach. It is easy to put a strong statement out on the internet. We can post anonymously or carefully craft a statement and sit back while the sparks fly. The consequences of our words do not seem as immediate in cyberspace. We are removed from bodily interactions when we lurk behind a screen. Having a conversation over dinner offers a chance to practice engaging the fullness of the other person in the moment. Learn the skill of empathy. The world needs more of it.

Most important, we should talk politics at the dinner table because the church calls us to be faithful, informed citizens. The United States Conference of Catholic Bishops writes in its document Forming Consciences for Faithful Citizenship, “As Catholics, we are part of a community with a rich heritage that helps us consider the challenges in public life and contribute to greater justice and peace for all people.” The church plays an important role in the formation of conscience. The principles of Catholic social teaching help Catholics evaluate policy positions and candidate promises in light of the gospel.

While the institutional church does not support any one candidate or party, the church does have a voice in the political arena. Our moral standards and social teachings cannot be relegated to mere ideals. We voice our beliefs in sanctuaries and street corners. We serve the hungry and demand change in the social structures that left them starved in the first place. Like it or not, government officials hold the power to make social change happen—or not happen. Catholics have to take action if we want the gospel mission to spread.

What better space to explore gospel living than among family? Pope Francis lifts up the family as the primary setting for faith formation. In his apostolic exhortation Amoris Laetitia (The Joy of Love), the pope writes, “The gospel message should always resound” in and among families. He continues, “This message ‘has to occupy the center of all evangelizing activity.’ ” Gospel truths are constantly challenged in the political arena. Any time human life is threatened, any time people in poverty or the environment suffer, Christian families are called to take a stand.

So how can we talk politics at the dinner table in a way that is productive and respectful?

• Lay out ground rules. Before the conversation even begins, be explicit about your expectations for one another. How can this time be fruitful for everyone? Rules such as listen, don’t interrupt, and give everyone a chance to speak can go a long way.

• Learn from one another. Few living rooms are equipped for presidential-style debates. Instead of trying to prove other people wrong, take a stance of openness and learning. How did your grandma’s view challenge or affirm your own stance? At the end, invite everyone to share one insight they gained from someone else.

• Risk being honest. It is OK to disagree with family! It is also OK to state your belief, then over the course of the conversation, change your mind or state your opinion in a different way. Pope Francis told folks at the 2015 Festival of Families in Philadelphia, “Perfect families do not exist . . . Love can flourish in men and women who try not to make conflict the last word, but rather a new opportunity.”

• Respond with “yes, and . . .” Your aunt might say something you generally disagree with. Is there anything in her statement that resonates? Or can you at least understand where she is coming from? Instead of immediately responding with an aggressive “That’s wrong,” try acknowledging another’s point. “Yes, I see why you might think that, and I think . . .”

For the sake of all people impacted by the political arena, take a chance and talk politics at the family dinner table this holiday season.

The laypeople seeking a monastic life in the modern world